From Blushes Supplement 26, following on from yesterday’s story. 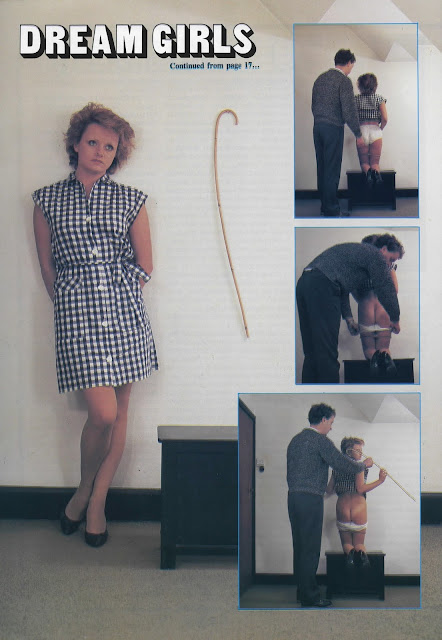 Sarah. It is Sarah up there, in the spare room. He blinks, screws up his eyes. No, not the riding master or anyone else, I have Sarah up there. I am going to cane her. And then the rest no doubt. She knows that Jane got it (and indeed is going to get more) so Sarah is in no doubt. I am not a joker, not in that respect.
Jane. Girls don’t really have a lot of loyalty, do they? But still, why should she, after Sarah told on her. And I led her into it of course. ‘What about Sarah? What does she do that she shouldn’t? Come on, Jane. She did tell me about you.’ It came tumbling out. After a bit. Sarah has a boyfriend, a fiancé in effect, but she has also let this other man, her boss… she has let him fuck her. Jane doesn’t say ‘fuck’ naturally. Not a nice word. But that is what we are talking about. No, Sarah would certainly not wish this little secret to be known. To anyone. She has not been very wise in confiding it to Jane. But then Jane is her best friend. Or was.
Maybe they’ll still be best friends. After all they’re both in the same boat now. Or in a few minutes. When he’s finished this drink.
Sarah has a blue and white check dress on. High heels. And tights, he saw. He could have made her wear a pair of shorts. He could have made her wear a coat with nothing underneath. No, the dress and tights are quite acceptable. Perhaps next time he’ll make her come in a coat with nothing underneath. Time to go up? 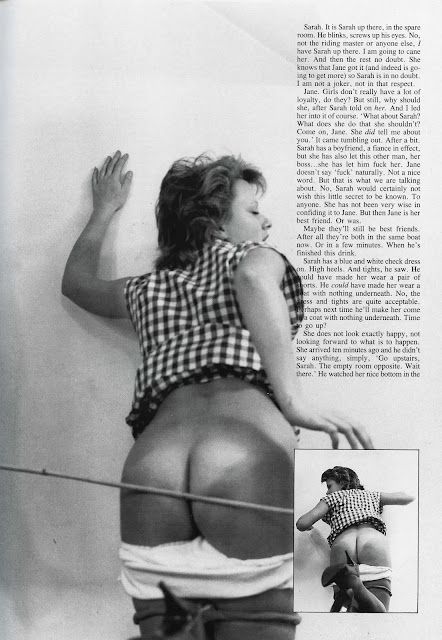 She does not look exactly happy, not looking forward to what is to happen. She arrived ten minutes ago and he didn’t say anything, simply, ‘Go upstairs, Sarah. The empty room opposite. Wait there.’ He watched her nice bottom in the tight skirt as she climbed the narrow stairs. The riding master as ever was impatient: Why wait. Give it to her now.
‘All right?’ he asks, smiling. He has hung the cane on the wall, for her to look at while she is waiting.
‘Look…’ She has evidently not enjoyed looking at it. ‘Please… You’re not going to… cane me…’
That is sort of rhetorical. She has not much doubt that he is. ‘Jane had the cane,’ he tells her. ‘Because you told me. I imagine she wants you to have it. And so do I of course. It sounds as if you’ve behaved in a dreadful manner.’ 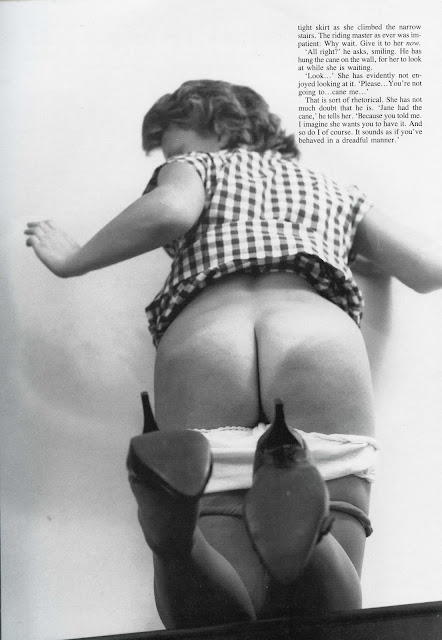 The high-minded moralist is speaking. Who of course is intending to indulge in the very same behaviour. No: correction. It will be the riding master. Or that college tutor. They are both dreadful, immoral people. And sometimes one cannot control them, they refuse to be reined back.
‘Get up on the stool.’ He is moving it close to the wall. ‘Kneel on it. Facing the wall. Turn your dress up, right up to your waist. And then…’
‘No!’ she squeaks. But she is doing it. ‘You can’t do this,’ the desperate voice adds. ‘Get on,’ he growls. ‘Get it right up. Then hand me that cane.’
He makes her stretch her arms out, palms against the wall. Arch her back to thrust her buttocks into greater prominence. Drawing the process out, ritualising it with these little touches, gently adds to the pleasure — and no doubt to Sarah’s discomfiture. Waiting. Wetting her knickers a little perhaps? 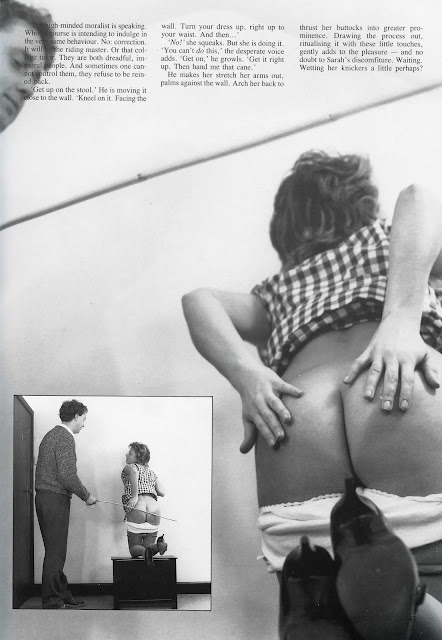 The riding master of course would be pressing for immediate action. The riding master is not a man of any great finesse.
‘Have you had it before, Sarah? By it I naturally mean the cane, not anything else. I am not referring to having a man’s erect member up you.’
A strangled. ‘No…!’ followed by a repeat of. ‘Look… you can’t…’
Oh. Can’t he? ‘Well that will add greatly to my pleasure, Sarah. A virgin in that respect. If in no other. Good. Are we ready then?’ 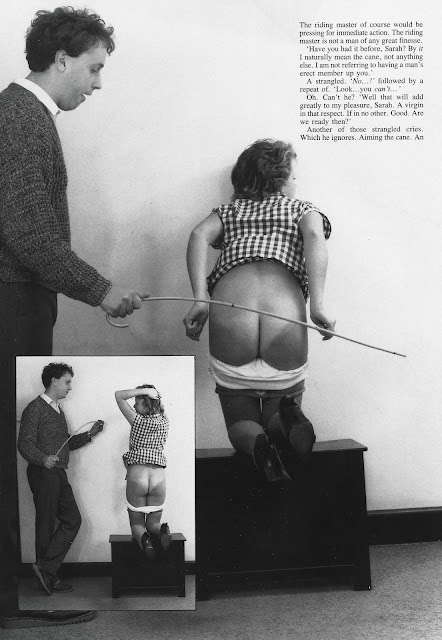 Another of those strangled cries. Which he ignores. Aiming the cane. An experimental wiggle. And…
‘Arrrggghhh…!’
Yes, she felt that. Sizzling her bottom. ‘Keep in position,’ he barks. A nice red stripe coming up. How many more? Well, we’ll play it by ear but certainly a nice little number. As many as she can take without getting really desperate. And then a few more for luck. And then… we’ll have to see what the riding master has to say. As usual he is getting very impatient already.
He cracks the cane in again across Sarah’s shivering nates. 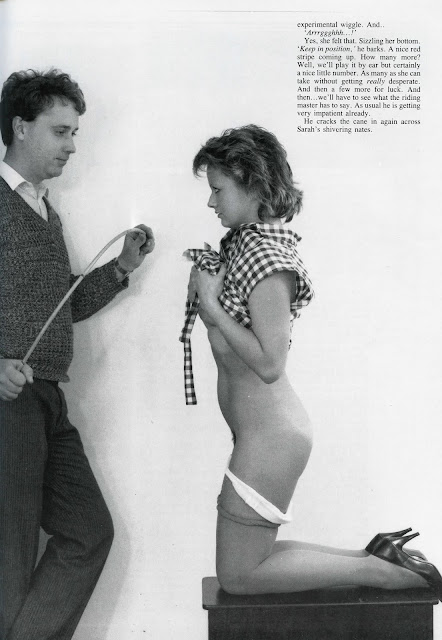