In an Englishman’s Castle – Part 2

Second of two parts, from Blushes 36 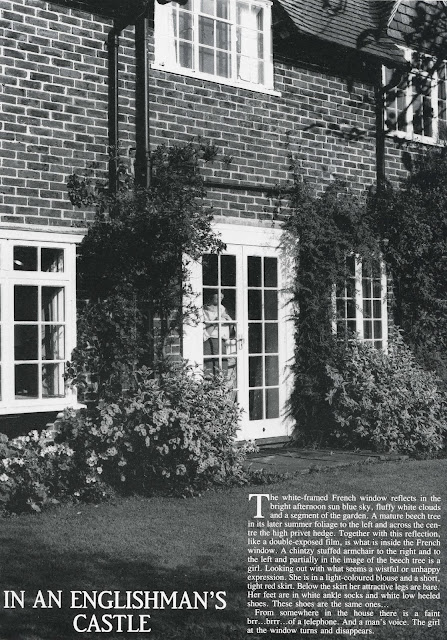 The white-framed French window reflects in the bright afternoon sun blue sky, fluffy white clouds and a segment of the garden. A mature beech tree in its later summer foliage to the left and across the centre the high privet hedge. Together with this reflection, like a double-exposed film, is what is inside the French window. A chintzy stuffed armchair to the right and to the left and partially in the image of the beech tree is a girl. Looking out with what seems a wistful or unhappy expression. She is in a light-coloured blouse and a short, tight red skirt. Below the skirt her attractive legs are bare. Her feet are in white ankle socks and white low-heeled shoes. These shoes are the same ones…
From somewhere in the house there is a faint brr… brrr… of a telephone. And a man’s voice. The girl at the window turns and disappears.
She enters. The phone is still ringing. On a table some six feet from where Mr Winder is seated reading his paper. He beckons to her to bring it to him. ‘And stand there.’ Pointing to the side of his chair.
‘Hello. Yes. Oh hello, Mrs Sinclair. How nice…’
Amanda blinks. Feeling her heart thump. The name is of course her own name. And the voice she can faintly hear over the phone… recognisable. Perhaps… it is to say she can come back now. She doesn’t have to stay: tonight and tomorrow and tomorrow night. One afternoon is enough, like before. Perhaps Mr Winder will say… 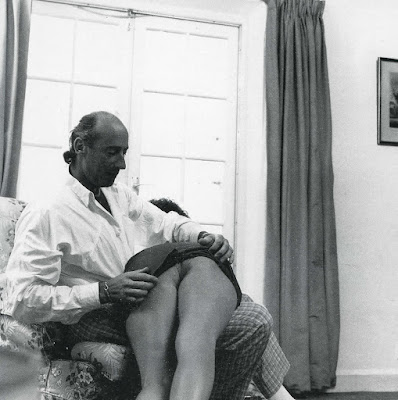 Her bottom is still faintly throbbing, even though it was an hour ago. The combined effect, one reinforcing the other, of the electric fire and Mr Winder’s tawse. It is an hour since she climbed tremblingly off the chair, on legs that seemed no longer made of flesh and bone but of some jelly-like substance. The tawsing was finally over and she could go up and take a shower and get changed and then come down, Mr Winder said. And when she did come down it was to be told to go in the lounge and stand still by the French window. ‘And don’t move. If I find you’ve moved one inch.’
The voice at the other end of the phone is doing all the talking. Apart from Mr Winder’s occasional word of agreement. But what is being said… if you don’t have your ear to the phone it is a meaningless babble. It finally comes to an end. Mr Winder’s fond and effusive farewells. Whatever has been said he is not now saying: Yes I’ll bring her round then. Or: Right; you’ll pick her up in ten minutes. I’ll see that she’s ready. 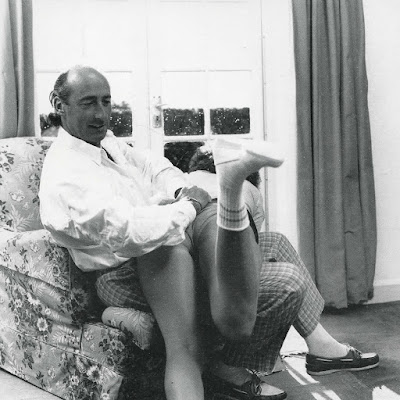 Mr Winder replaces the phone in its cradle. Hands it to Amanda. She is to put it back on the table. And then… come back.
‘Stand closer. Here! And stand still. How’s your bottom?’
‘Dreadful.’ She grimaces, remembering.
‘You’re lying, Amanda. I know it’s not bad now. Not an hour since I whipped you. Lying, Amanda. And being deceitful: like trying to edge away from the fire when I put you in a certain place. It simply bears out what your mother says, doesn’t it?’
She makes a face. It is pretty clear her mother hasn’t requested her early return. Mr Winder’s hand snakes out to deliver a stinging smack to the side of her leg. ‘Doesn’t it, Amanda?’
She yelps. ‘Yes.’ There is nothing else to say although it isn’t true and it isn’t true what her mother says.
‘What you need, Amanda, is a good whipping every hour. From the time you get up until you go to bed. A good whipping with the tawse every hour, after 15 minutes close in front of that fire. For a week. Do you think that would sort you out? Do you?’ 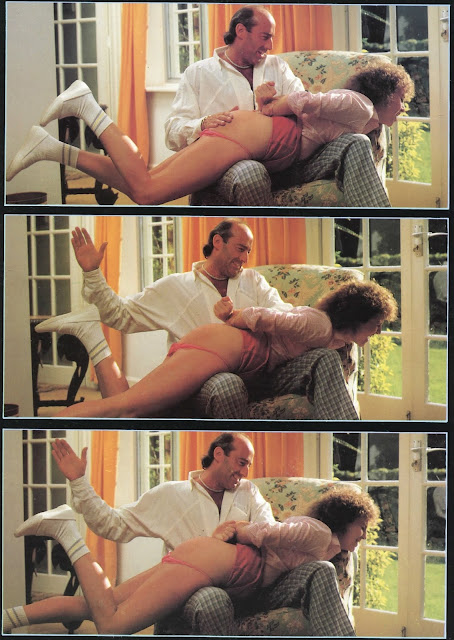 ‘Yes… yes,’ she yelps before the hand can come out again.
‘And all that running about with young men. I know how to stop that. Six or seven more mature characters. Give you an evening with them. That would cool you down a bit, don’t you think? Make you decide you’d had enough of that sort of thing. Eh?’
‘No!’ she yelps.
He grabs her. Grabs her arm and pulls her down over his lap. ‘Don’t you mean yes, Amanda. It would make you think you’d had enough of it?’ He is grabbing up the short skirt. Working it up over her hips. And then the knickers — not the same knickers, these are pink — pulling them down. So that Amanda’s bottom is bare again. She is gasping, moaning, at this sudden assault. He twists her arm behind her back, grasping her wrist. His free hand delivers a stinging splat to her writhing bottom-cheeks.
‘For your information, Amanda, if you didn’t hear, your mother wants me to keep you as long as I think necessary.’ Another splatting smack. ‘She thinks if I can’t do anything with you no one can and therefore I am to have every opportunity.’ A third resounding splat. ‘What have you got to say to that?’
Amanda doesn’t say anything. There is only a whimpering moan. Mr Winder smacks her again and then drags her knickers down a bit further. Slides his hand in between the soft warm thighs. ‘Eh, Amanda? What do you think?’ 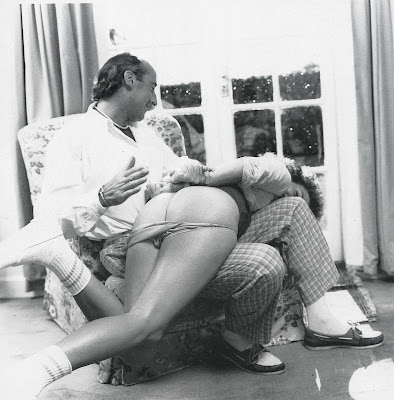 She makes a gurgling sound. His fingers are there, right there again. Working her. A whimpering moan. ‘This is what you like, eh Amanda? This is what naughty, wretched girls like.’ She can’t help it, her hips are responding to the hand. Thrusting rhythmically against it. Because of everything: that fire, that tawse, now over his lap being spanked. She is in such a state that she can’t help… It is getting worse, more intense. She hasn’t any control. She can hear herself moaning: a moan of anticipated release… and then…
Mr Winder has stopped. He has taken his hand away, just as she was about to… go over the top. Another of those stinging smacks to her bottom, only this one, with its shock effect at that very moment, is much worse. He is pushing her to her feet. Once again, as at the end of the tawsing, though this time for a different reason, her legs seem incapable of supporting her. She holds onto the arm of his chair. Mr Winder coldly eyeing her.
‘Yes Amanda. A wretched, wretched girl. Another taste of that tawse is called for, don’t you think?’
She doesn’t, can’t answer. Her whole body is shaking. ‘Go and get the tawse then.’ With a moan she turns.
‘Wait. Just a moment. Let’s see if you can act in a more submissive manner. Like man’s faithful friend. Get down on your hands and knees. Go on, Amanda. Get down. That’s it. Now go out like that; hands and knees. And bring it back like my faithful friend Buster used to bring my Telegraph. In that pretty mouth. Go on, Amanda.’
----//---- 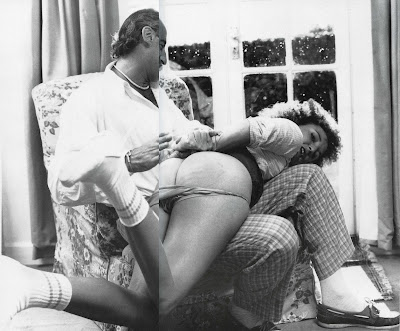 Climbing up on the high chair again. In blouse and ankle socks and the low-heeled white shoes. The short red skirt was removed before she stood in front of the fire and so were the knickers. Amanda’s bottom is as hot as the first time. Really scorching. She hangs onto the back of the chair. A little whimper as Mr Winder’s hand touches her throbbing bottom. She shivers as the hand caresses the burning cheeks. His voice is silky, like the caress.
‘If you weren’t such a wretched girl, Amanda, you wouldn’t need any of this. You wouldn’t have to suffer any of this business. And I wouldn’t have to give it to you. You don’t think I enjoy all this, do you?’
A spluttering, unintelligible sound. Even if Amanda were capable of clear speech at this point there would not be much of an answer to Mr Winder’s statement. ‘Do you think you can try and improve, my dear? Otherwise, as I’ve told you, your mother said I was to keep you here as long as I thought fit.’
Amanda does manage something this time. Something that is pretty definitely a garbled but desperate Yes.
Mr Winder smacks her bottom. ‘I certainly hope so. We’ll see. I have a couple of gentlemen coming round this evening. We’ll see how you behave in their presence. How you perform. Mmmm? We’ll see. And now we’d better get on with this other business. Stick your bottom out. A nice big target. And keep it still.’
----//---- 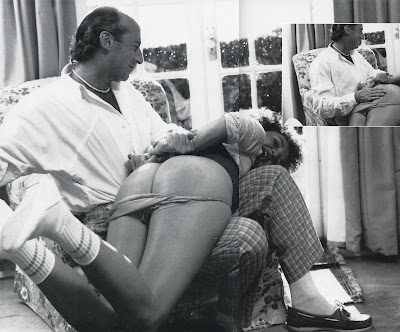 9pm. It is dark except for the street lamps and the curtained lights of the houses. .A quiet well-ordered evening in suburbia. Further down the street a lady is walking her dog, otherwise the place is silent. A nice, quiet and orderly late summer evening in archetypal middle-class England. The place is not deserted though: there are the lights behind the curtains. One house certainly, our house that has the splendid beech tree at the rear, does have visitors: there are several cars in its gravel driveway. There are lights downstairs and also upstairs, a subdued light in one of the bedrooms. But the heavy drapes and curtains are tightly closed on all of these windows. We cannot peer in. So we must leave this particular Englishman in his castle and his visitors, whoever they are, to their privacy. To enjoy without interruption whatever their particular English pastimes and pleasures may be. 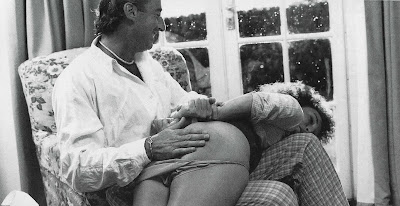