The air in the hallway was still, the house silent, as Sara sighed yet again. Facing the bannisters, hands on her head, clad only in T-shirt and white cotton knickers, Sara was no stranger to the ritual. It would not be the first time she had been spanked in that house. And it certainly would not be the last.
She jumped slightly as a creak at the far end of the hall suggested another presence. Her chastiser, perhaps, back from the stables to which he had disappeared almost an hour before.
Her arms had been aching for some time now, but she dare not take them down for fear of being caught out of position. The punishment would be more severe than ever if she were to move more than a fraction. The rules were strict. And the punishments stricter.
When her mother had signed the form, and called for her to sign below, being old enough now to take adult responsibilities, little had Sara realised what the ‘Private Remedial Course’ would involve. So far, the academic improvement she had shown was as nothing to her improved general demeanour. The sour-mouthed, whingeing teenager had now been replaced by a grudgingly obedient young lady, fast learning the wisdom of compliance. 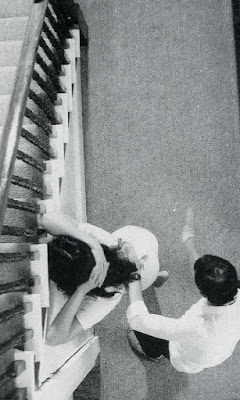 Sara’s offence that day had been slight — she had challenged her tutor on a point of house discipline, complaining about lights out at 10 pm. The reaction had not been an encouraging one.
Spankings were designed to allow the girls (for there were three of them) a swift recovery and no long-term marking. The proof of the roasting they received faded rapidly, the smarting palm or paddle evidenced just for a few hours depending on the person administering the punishment.
There was another creak. She tensed, certain that someone was checking through the crack in the door that she had not moved from her instructed position. Her supposition was confirmed as her tutor swung open the door at the end of the hall and walked swiftly towards her.
‘When was the last time you had to be beaten, Sara?’ he asked. 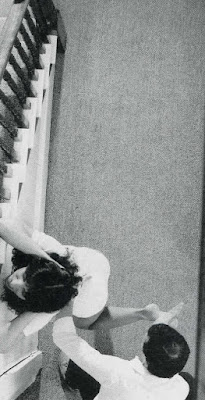 The question was rhetorical. He knew damn well it had been the day before yesterday, as he had administered it himself. Sara played his game.
‘Day before yesterday, sir.’
‘Ah yes, so it was. Go and close the door.’
Sara walked away down the hall, her tutor’s eyes following the tempting undulations of her cotton-covered bottom. She nudged the door shut with a flick of her hips — she knew better than to drop her hands from her head — and returned to stand facing him.
‘You may lower your hands.’
‘Thank you, sir.’ She meant it, and rubbed her arms furiously.
‘Face the other way, hands up,’ he snapped after a few moments.
‘Remind me, Sara, were you ever beaten before you came to me?’
‘No, sir.’
‘Something for which we must make amends then eh?’
‘Yes, sir.’
‘Adopt the position.’

Sara shuffled her feet apart, brought her hands behind her head and leaned her elbows gently against the white-painted panelling. Her bottom was simultaneously pushed invitingly out and her tutor grunted approval as he hitched her T-shirt above her waist.
She felt his left hand steady her and waited for the first impact of his palm. It wasn’t long coming, and was followed by a rapid tattoo of smacks delivered alternately to each quivering cheek. It wouldn’t be long now, she thought, until she felt his fingers in the elastic of her knickers as they pulled inexorably down, baring her buttocks for an even sounder chastisement.
Her timing was almost perfect, as the white cotton slid down her legs: ‘Pick them up, and give them to me.’ She obeyed. and returned to her position. There was a click and a creak as the door at the far end of the hall opened to reveal the establishment’s other tutor, a stony-faced woman in her fifties whose speciality was languages — and domestic discipline. Her version of domestic discipline favoured the thick leather paddle, which stung so much more than the palm of the hand.
Sara hoped that she wouldn’t take it into her mind to interfere with the current spanking, which was now well advanced, her tutor’s palm rising and falling with a sharp crack at the end of each downward movement as flesh impacted flesh. His fingers seemed to reach under her cheeks, curling round onto the inside of her thighs, the smarting more uncomfortable than usual. She shuffled her feet slightly. 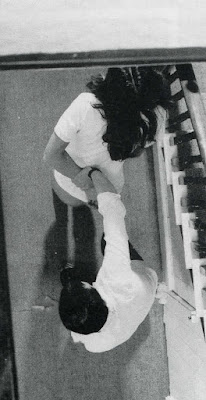 ‘That girl should be getting the paddle, Neil,’ the other observed. ‘I had to spank her last night for disobedience. It’s in the book.’
‘Sod it,’ hissed Sara quietly.
But not quietly enough: ‘What was that, miss?’
‘Nothing, Mrs Dudgeon. I didn’t say anything.’
‘Yes you did, girl. An expletive if I’m not mistaken.’
‘Upstairs, Mrs Dudgeon?’
‘Upstairs, Neil. And spank her up those stairs in double quick time.’
‘Right you are, Mrs Dudgeon. You heard, young lady: upstairs!’
Sara turned and was caught a resounding smack on her right thigh. The yelp she emitted as she scuttled towards the foot of the stairs encouraged another stinging impact, this time on her right buttock. In the urgency of her escape, Sara stumbled on the stairs, affording Neil a double spank to each buttock before she could recover, complaining, and scamper to the top of the first flight.
Mrs Dudgeon smiled to herself as she popped back to their private sitting room to collect the paddle. This girl would benefit from another sound application of its leather smoothness. 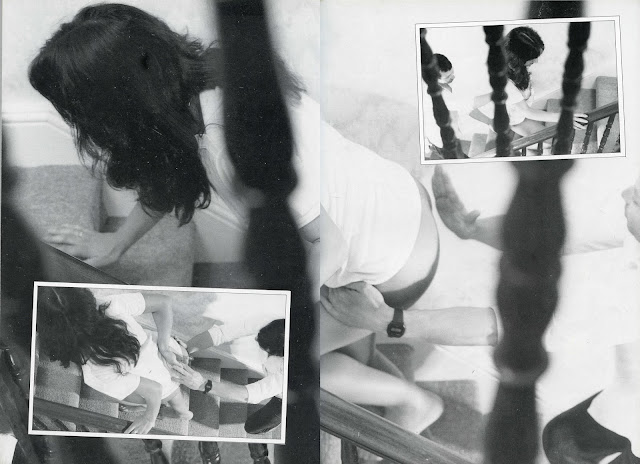 ‘Lie over the stool,’ instructed Neil, and Sara hurried to obey, hoping that the remaining punishment would be administered by him and not by the ever-vigorous Mrs Dudgeon. Her hopes were dashed as the lady in question almost exploded into the room, brandishing the leather paddle and mumbling recriminations at the girl.
Roughly, she hauled the T-shirt up the youngster’s back and laid the paddle vigorously across her unprotected left buttock, which quivered in protest until its contortions were joined by its neighbour’s. The cheeks quivered in turn under the onslaught, Sara pedalling her legs in an effort to relieve the intense discomfort. It was always worse when she chose to paddle the girls fast, as there was not a moment to recover from each blow before the next arrived, building the pain to an excruciating crescendo during which none of her charges had the will to stay silent.
Mrs Dudgeon laid into her student with a will, the noise of the implement’s impacts causing Neil to walk over and close the window lest the gardener hear what was going on. He need have no fear: the gardener had long since discovered the purpose of the ‘Upstairs Room.’ 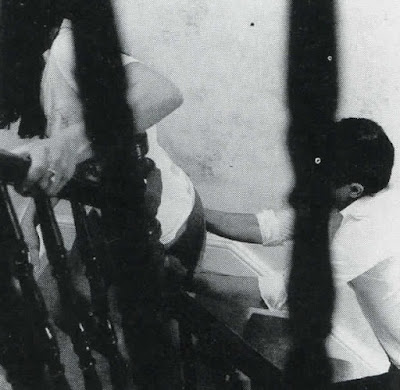 Indeed, he now knew just where to stand to best appreciate what was going on in there, and could distinguish between punishments administered with knickers on or bare bottom, with hand, plimsoll, or paddle. He took a perverse delight in attempting to identify which of the three students had been on the receiving end on a particular occasion, and never failed to commiserate with them over their misfortune. And to think that someone was paying for this to happen to their daughter!
He had already discovered — by a simple process of elimination, as both other girls were in the library studying — that the victim on this occasion was Sara, with the tumbling dark hair and tanned body. He suspected she sunbathed nude on the roof, but proof had so far eluded him. When it was provided, he would be sorely tempted to take her disciplinary needs into his own hands rather than refer the matter to the ubiquitous Mrs Dudgeon.
At last, silence reigned, and he heard Mrs Dudgeon clump back down the stairs. He also fancied he could hear Sara whimpering despite the window being closed, but it could have been that bloody dog in the kitchens.
The sound of the record that came drifting across the meadow from the lodge was somehow ironic: ‘Three Steps to Heaven’. If all the girls who arrived here knew what lay at the top of Mrs Dudgeon’s steps, you wouldn’t see them for dust… 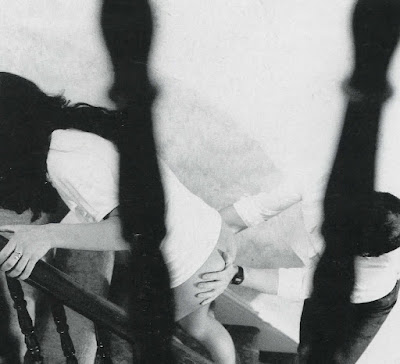