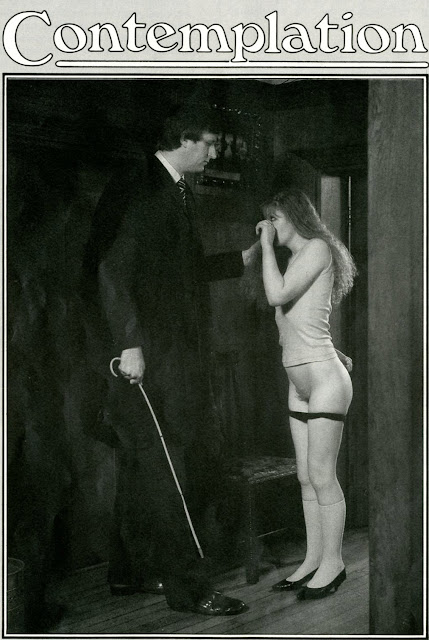 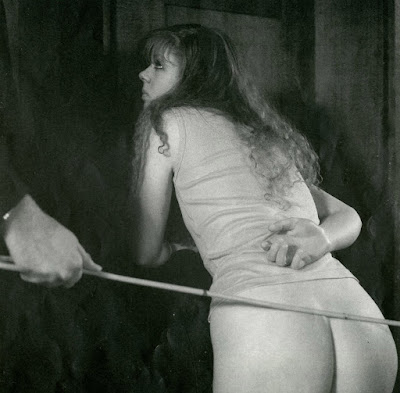 There was a short, sharp whistling sound then a band of fire seared across her buttock-cheeks. Though Susan was not aware of it, the Head had given her quite a moderate stroke but, to her, the pain was far worse than she had expected. Her head of long hair tossed back and she gave vent to a series of breathless gasps. One hand came off the back of the chair.
‘I didn’t hear you, Susan,’ he said.
‘One…’ she whimpered. Oh so many more yet to come!
‘And I want both hands on the back of the chair.’ Susan put them there, her bottom twisting half away in anticipation. Now she knew just how much that cane hurt.
Again that deadly sound; again that awful burning pain, slicing across her. The hand came off again and, this time, clamped momentarily to the new weal. ‘Ahh… hhhaaah…’ she gasped. Then she remembered. ‘T-two…’
A hand gripped her wrist and pulled her hand up her back. Then she got two strokes in quick succession. Harder strokes. Yelping cries were torn from her and the sudden, double pain almost made her squirm right off the chair seat. ‘I told you to grip the back of the chair, girl. Do so! Remember what I said about your Form Mistress.’ Desperately, Susan forced herself to grip the back of the chair again. Those weals were throbbing like hot wires. Would she be able to endure eight more? She must! She must! Otherwise it wouldn’t be eight, it would be fourteen more!
‘I’m waiting Susan…’
Waiting? Waiting for what? Then she remembered again. ‘Three… mmfff… and… mmfff… four…’ she sobbed out.
Number five caught her on the thigh tops and she squealed loudly, only just managing to maintain her grip. ‘Oooh… aahh… ooh… sir please not… not so hard… please!’ She simply couldn’t help begging. The pain was so awful.
‘I’m waiting again, Susan,’ was all he said. ‘You really are a most forgetful girl.’
‘F-five… u-ughhh… five…’ she choked out, feeling her buttocks clench convulsively in dread of number six.
It came. Whistling and biting. And, yet again, her hand flew back. It was quite impossible to stop it, no matter how much he threatened. Perhaps he understood this, for, now, he said nothing. ‘S-six…’ she said. Almost impossible to believe there were still six more like that to come!
‘We will take a two minute break,’ said the Head. ‘Stay exactly as you are, Susan. Hands on the back of the chair, bottom well out. You keep shrinking back into the chair. I want your bottom out.’
Feeling the bitter humiliation of it, Susan thrust fully. ‘That’s a bit better,’ he said. Susan knelt there, trembling, wishing the world would end. In the silence she could hear her heavy breathing.
‘Are you regretting your wickedness now, Susan?’ he enquired.
‘O-oh… yes… yes, sir!’ Perhaps, if she sounded truly regretful, he would let her off the other six. ‘V-very much so…’ she added.
‘I am glad to hear it, Susan. Unnatural sex at your age is most reprehensible. As you are probably aware, it is the only offence in this school for which girls are caned. Quite rightly so, in my view.’
Silence fell again. Susan shivered. Was he going to let her off or not? ‘P-please… sir…’ she quavered, ‘I’ll never do it again!’
On Mr Rockworth’s bland features there was a little smile of supercilious disbelief. He knew the intense desires forced upon young girls of this age. This one might say she’d never do it again but when, in the middle of the night, under the soft warm sheets, that burning desire came again, fingers were bound to stray. It was inevitable. But that did not mean such a sin should go unpunished. If he did not use the cane in such cases, these excesses would be far more rife than they were. The Head was sure of that. He contemplated the rounded bottom. He was dealing with it less harshly than he would done that of a 17 or 18-year-old but the weals looked particularly vivid over the soft, white skin. She was obviously more sensitive than most.
‘Well, Susan, prepare yourself,’ he said, seeing the thrusting nates make another of those clenches of dread.
‘Oh please… sir… w-won’t you let me off? I promised I… I’d never do it again…’ came the despairing plea.
‘That’s what you say, Susan,’ he said. ‘The cane is making more certain that you don’t. For, never forget, you can find yourself kneeling where you are again. In which case, I shall be less lenient.’
Susan froze. Could that possibly be true? She began to sob loudly, realising now there was no escaping her full punishment. Oh it wasn’t fair. It wasn’t. She couldn’t help it… 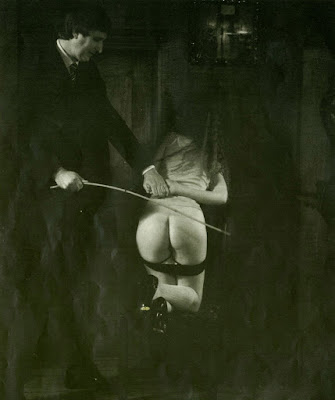 The caning was resumed and had her crying out breathlessly as she squirmed on the seat, behind twisting uncontrollably left and right.
‘S-seven… aaagh… oh seven…’ she gasped.
Sssweee… ccrrraaacckkkk! Now her hand came back again, clasping, as she cried out her torment. This time her hand was seized and pulled up her back again, off her juddering bottom.
‘I’m waiting!’
‘Eight!’ she almost shrieked. Then, once again, she got two harder cuts in quick succession. And she knew the reason why. She was almost down on the floor, kicking out, but she could not clasp as the searing lines of pain, since the hand still gripped her wrist and kept yanking it up.
‘Up… up… back on the seat. Bottom square… and out, girl!’ Oh how could she make herself? Oh how! But she must! She must! How many was that? How many to go now? Then she remembered.
‘N-nine… and… aahhh… ten!’ she jerked out. Oh praise be… only two more! Only two! Oh let them come now! Let it all be over and done with!
The Head was an experienced hand when it came to the correction of young girl students. He knew the value of keeping them waiting. Not only before the punishment but, on occasions, during it. There was, for example, the halfway interval. Quite a tension-builder that. Sometimes, with older girls, he dragged it out for five minutes or more, during which time he delivered his little homilies. Also, it was a custom, when a girl knew that the end of her punishment was drawing near, he would delay.
As now…
‘How many more, Susan?’
‘T-two… sir…’ One could hear the relief. Yet still that young, well-rounded bottom kept flinching and quivering. Very understandable. It was her first caning. Possibly her last. The memory could remain very vivid for a long time.
‘That’s correct, Susan,’ he said. ‘At least your arithmetic is not at fault.’
One must have one’s little jokes… even if they weren’t appreciated! The bottom twisted away with sudden violence, obviously anticipating a stroke, but still he kept her waiting. ‘Yes… just two,’ he said. ‘But they will be harder!’
‘Oh no… sir… pleee… ease!’
He gave her the penultimate stroke with considerable vigour, cutting just above the thigh tops and produced the loudest and longest series of gasping cries so far. And oh how it made that young bottom squirm! Yes… she would remember that cut for many a day!
She was sobbing deeply now, shoulders heaving. Terrified of the final stroke still to come… yet desperately wanting it to be all over and done with. Again, deliberately, he kept her waiting.
‘Just one more, Susan,’ he said.
‘Ohh… yes… yes… sir!’ It was almost as if she were begging him to give it to her! Finally, the Head relented… and did so. It was another real stinger like number eleven had been and down to the floor she went, writhing and squealing out in pain. He nodded with some satisfaction. The girl had been well punished. As she deserved to be. There was little doubt that ‘naughtiness’ had been quelled. For quite some time anyway.
‘Stand up!’ he ordered. The girl stood up, wincing. She stood before him, tears streaming down her cheeks, hand clasped to her bottom, knickers still halfway down her thighs. ‘Understand, Susan, that what has just been done to you, is for your benefit. Designed to make a better young woman of you. A more moral and upstanding young woman. I hope you realise that?’
‘Y-yes… mmfff… y-yes yes sir…’ she nodded pathetically, mouth almost out of control.
‘Very well, Susan, you will resume your seat, keeping your knickers down. And you will remain in this room to contemplate what has been done to you. Above all why it has been done to you. At the end of that time, Matron will come and fetch you. Maybe she will give you some attention.’
Gasping out, Susan sat down on the chair, head drooping. The pain was still atrocious. Twelve bands of throbbing fire. She sobbed bitterly. For the time being, she was quite defeated. Quite.
The Head strode happily back to his study. There the Head Girl waited. It was one of her evenings for ‘Special Tuition’. He’d had to cane her a couple of times for naughtiness. Now there was no longer any need for that. At 18, she had another outlet for her natural desires.
Like… guess who? 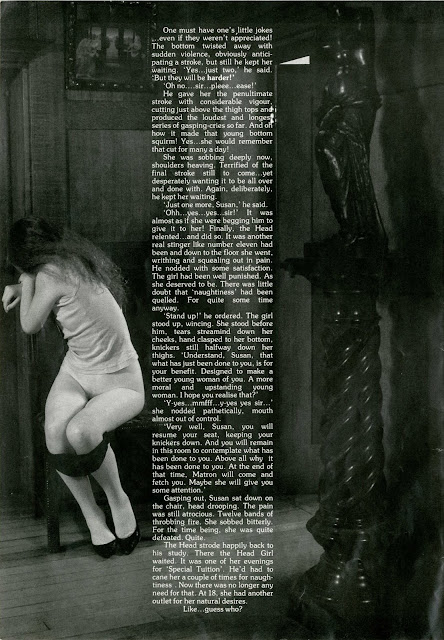