The finale of a four-part story, from Blushes 4 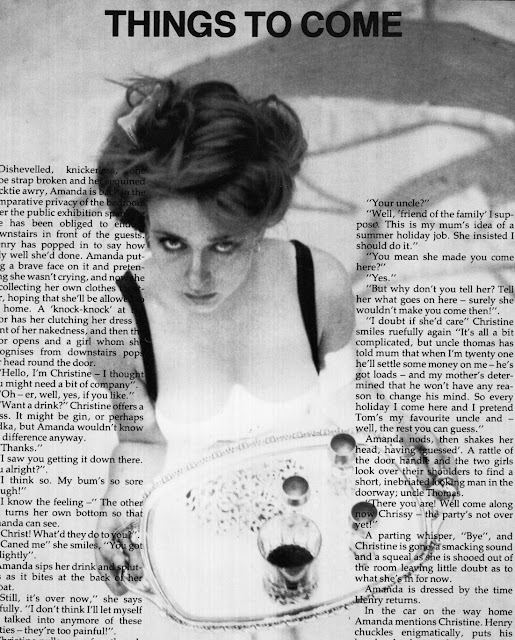 Dishevelled, knickerless, one shoe strap broken and her sequined necktie awry, Amanda is back in the comparative privacy of the bedroom after the public exhibition spanking she has been obliged to endure downstairs in front of the guests. Henry has popped in to say how jolly well she’d done. Amanda putting a brave face on it and pretending she wasn’t crying, and now she is collecting her own clothes together, hoping that she’ll be allowed to go home. A knock-knock at the door has her clutching her dress in front of her nakedness, and then the door opens and a girl whom she recognises from downstairs pops her head round the door.
‘Hello, I’m Christine — I thought you might need a bit of company.’
‘Oh — er, well, yes, if you like.’ 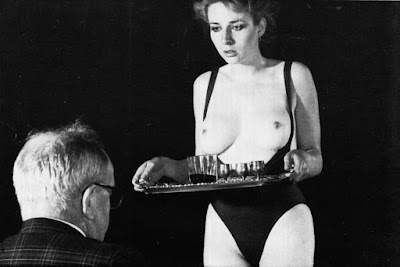 ‘Want a drink?’ Christine offers a glass. It might be gin, or perhaps vodka, but Amanda wouldn’t know the difference anyway.
‘Thanks.’
‘I saw you getting it down there. You alright?’
‘I think so. My bum’s so sore though!’
‘I know the feeling —’ The other girl turns her own bottom so that Amanda can see. 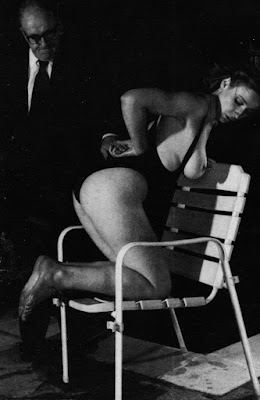 ‘Christ! What’d they do to you?’
‘Caned me,’ she smiles, ‘You got off lightly.’
Amanda sips her drink and splutters as it bites at the back of her throat.
‘Still, it’s over now,’ she says ruefully. ‘I don’t think I’ll let myself get talked into any more of these parties — they’re too painful!’
Christine pulls a wry face though she seems cheerful enough. 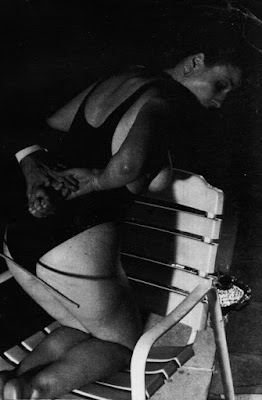 ‘I’m afraid I don’t have much choice.’ She smiles, almost apologetically. ‘I live here.’
‘Do you?’ Amanda can’t resist asking the obvious question. ‘And — and does this kind of thing go on all the time?’
‘Sort of — for me it does, anyway. My mum thinks I’m here as some kind of English au-pair to the man whose house this is; my uncle — well, kind of uncle.’
‘Your uncle?’ 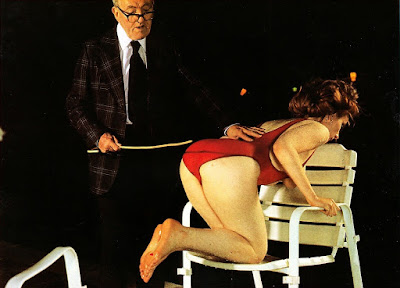 ‘Well, ‘friend of the family’ I suppose. This is my mum’s idea of a summer holiday job. She insisted I should do it.’
‘You mean she made you come here?’
‘Yes.’
‘But why don’t you tell her? Tell her what goes on here — surely she wouldn’t make you come then!’ 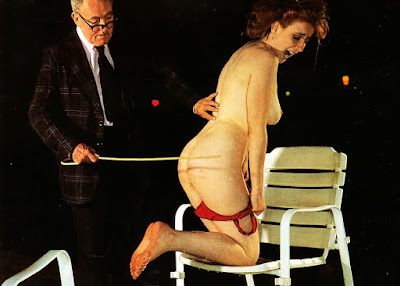 ‘I doubt if she’d care.’ Christine smiles ruefully again. ‘It’s all a bit complicated, but Uncle Thomas has told mum that when I’m twenty-one he’ll settle some money on me — he’s got loads — and my mother’s determined that he won’t have any reason to change his mind. So every holiday I come here and I pretend Tom’s my favourite uncle and — well, the rest you can guess.’
Amanda nods, then shakes her head, having ‘guessed’. A rattle of the door handle and the two girls look over their shoulders to find a short, inebriated-looking man in the doorway: Uncle Thomas.
‘There you are! Well come along now Chrissy — the party’s not over yet!’
A parting whisper, ‘Bye’, and Christine is gone, a smacking sound and a squeal as she is shooed out of the room leaving little doubt as to what she’s in for now. 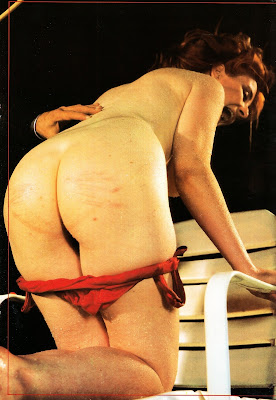 Amanda is dressed by the time Henry returns.
In the car on the way home Amanda mentions Christine. Henry chuckles enigmatically, puts his hand on her knee and pretends to be surprised at the time.
‘Goodness — didn’t realise it was so late.’ He grins. ‘Can’t see you getting home tonight, my girl.’ Amanda’s dress is slipped up her thighs. ‘‘Fraid you’ll have to come back to my place. Eh? What d’you say?’
Amanda, whose knickers are already being slipped down from under her bottom, doesn’t feel brave enough after the events of the evening to say anything.