Since the cover of Whispers 1 has been voted the favourite magazine cover by readers of this blog I thought it would be good to re-run the cover story from that issue with a full set of pictures this time. You can find additional pictures from this set in the story Games in a Playsuit. What a lovely girl and what a lovely outfit. 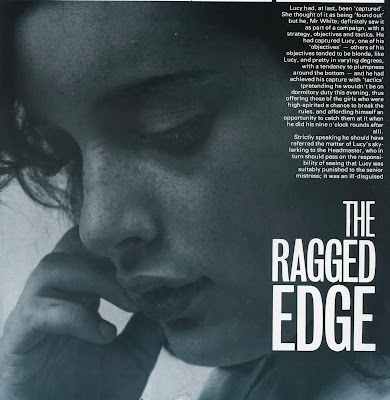 Lucy had, at last, been ‘captured’. She thought of it as being ‘found out’ but he, Mr White, definitely saw it as part of a campaign, with a strategy, objectives and tactics.
He had captured Lucy, one of his ‘objectives’ — others of his objectives tended to be blonde, like Lucy, and pretty in varying degrees, with a tendency to plumpness around the bottom — and he had achieved his capture with ‘tactics’ (pretending he wouldn’t be on dormitory duty this evening, thus offering those of the girls who were high-spirited a chance to break the rules, and affording himself an opportunity to catch them at it when he did his nine o’clock rounds after all). 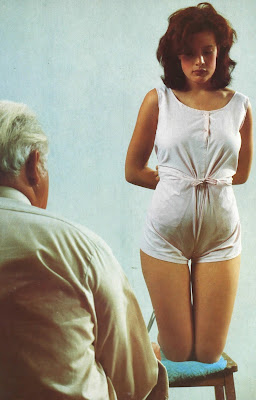 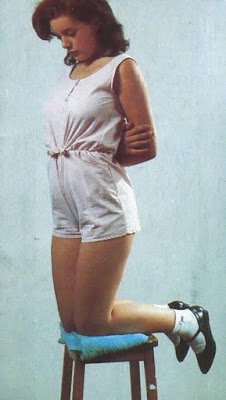 Strictly speaking he should have referred the matter of Lucy’s skylarking to the Headmaster, who in turn should pass on the responsibility of seeing that Lucy was suitably punished to the senior mistress; it was an ill-disguised secret, however, that the Headmaster tended not to pass on this responsibility, preferring to punish the miscreants himself whenever possible.
Rumour had it that he considered humiliation to be an important aspect worthy of consideration when the chastisement of girls was concerned, and felt that this object could best be achieved by the discipline being administered by a man — and who better than himself. Other members of staff, naturally no less enthused by the prospect of bare-bum caning a teenaged girl, had taken to imitating the headmaster’s example, well aware that there would be little that gentleman could say against it in the circumstances. 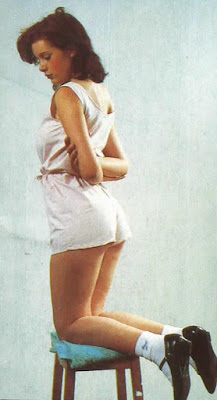 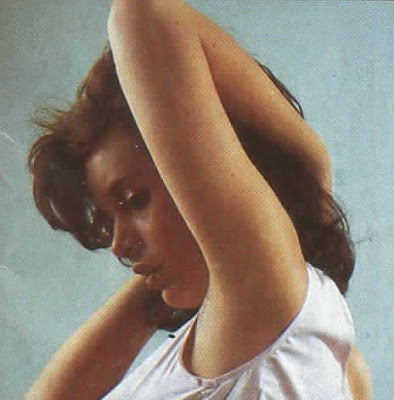 Miss Wallis, the senior mistress, lodged frequent protests when word of clandestine ‘knickers-down’ punishments reached her, but the Headmaster usually invoked the ‘strike while the iron is hot’ excuse — in other words, that girls should be punished there and then, if caught in some breach of school rules — an argument which Miss Wallis treated with suspicion but didn’t quite dare to distain.
The hours after classes, then, when Miss Wallis would not normally be on hand when there was any ‘striking hot iron’ to be done, were much preferred by those members of staff, including the Headmaster, who wished to catch a girl ‘up to something’, for prowling the dormitory corridors on the lookout for a likely candidate. Miss Wallis’s irritating habit of locking the punishment room door after school and taking the key with her had led to an unauthorised but common use of the juniors’ changing rooms for most illicit punishments, the building being sufficiently distant from all others as to minimise the likelihood of noise ‘giving the game away’. 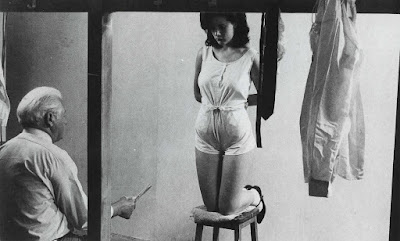 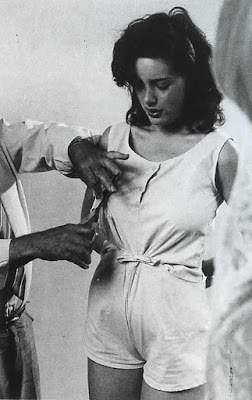 The changing room then, though staff members avoided speaking of it in connection with the use to which it was frequently put ‘after hours’, was understood to be the place to which misbehaving girls were taken on most nights of the week. It was in this changing room, therefore, that the ‘captured’ Lucy had been suffering the consequences of her high-spiritedness for the past fifteen minutes, at the hands of the scheming Mr White. With fifteen of the eighteen strokes she’d been promised glowing across her chubby, up-tilted bottom, Lucy was somewhat more than a little tearful.
‘Learning your lesson, Lucy?’  intoned the beady-eyed Mr White, his cane waggling menacingly a foot or so behind the girl’s flinching buttocks as he picked his spot for the next stroke. 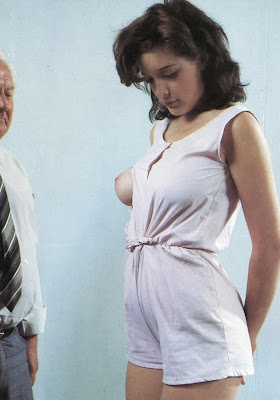 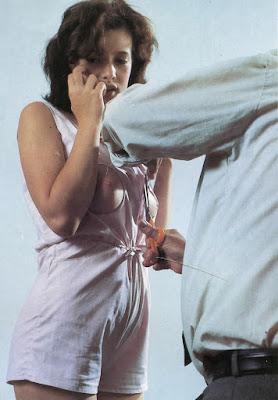 ‘S-sir — sir. Yessir — ooo-hooo!’ sobbed Lucy, groping frantically for where the last stroke had been whisked up under the plump underside of her cheeks. Her tucked under knees — tucked under the old, rickety desk which someone had conveniently arranged to be left there — squeezed fervently together and her bare toes curled under against the floor. Her pyjama pants draggled around one ankle though they’d only been taken down to mid thigh when she’d first been put over desk, and the upside-downness of the top half of her body when she’d been made to wriggle further and further across the uncomfortable desk top, had allowed her pyjama top to slip up round her shoulders and leave her full young breasts quite uncovered.
‘Put your hands in the middle of your back then.’ said Mr White, and Lucy reluctantly desisted from squeezing at her bottom and folded her hands up out of the way of the cane. 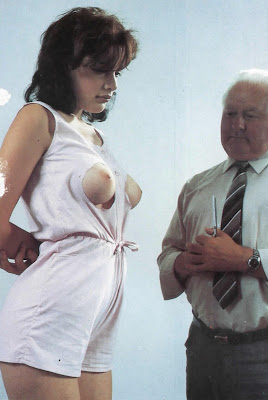 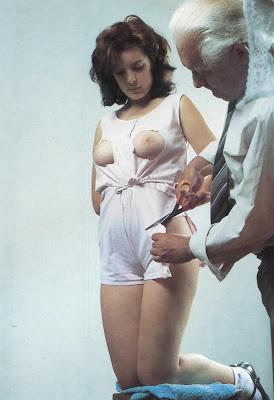 Her last three strokes were administered with meticulous wickedness to exactly the bits of her bottom that she would have to sit on in assembly next morning — Mr White ensuring that he would have something to amuse him during that most boring part of the school day, when he would be able to watch the girl easing her bottom this way and that on her chair as she tried to find a bit to sit on that didn’t remind her of her caning the previous evening.
While she wriggled still from these last strokes Mr White paced pompously up and down the narrow aisle between rows of clothes hooks, then when her sobbing had quietened sufficiently — and Mr White had adequately enjoyed the spectacle of his most recently attained ‘objective’ blubbering and rubbing ruefully at her caned bum — he allowed her to get to her feet, which she did with an unhappy pout and wide, wet-rimmed eyes. 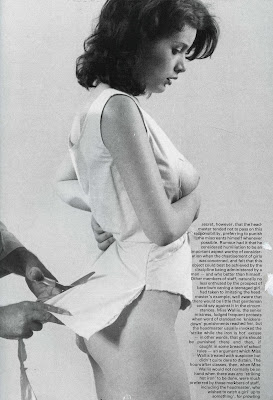 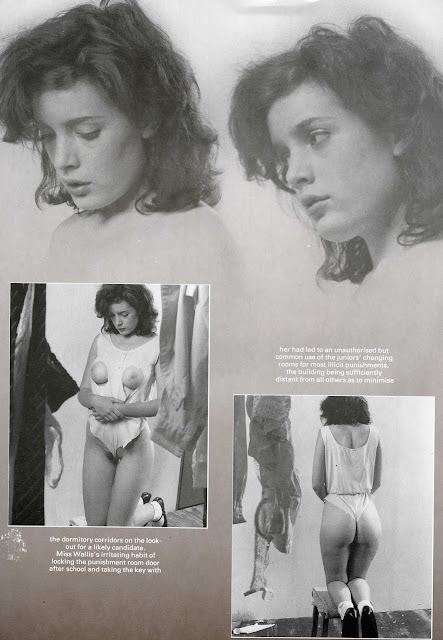 ‘Perhaps you’ll be in bed before lights out, if you hurry,’ said the Housemaster. Lucy licked tears from her lips and brushed at her cheeks with the back of a hand, her tear-filled eyes still on his, then she squatted uncertainly, not sure if she was being dismissed, and scooped up her pink-flowered pants.  She stood up again, half at attention, her young breasts pushing forward under her pyjama top and her thighs pressing close against each other. Childishly she swallowed — gulped really — and waited for confirmation that she could indeed go — pyjama trousers clutched in one hand while the other sneaked round to her bottom and squeezed convulsively at her hot-wealed bum-cheeks. 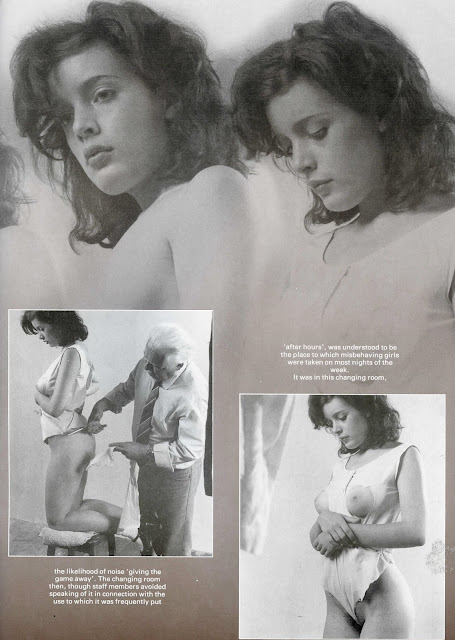 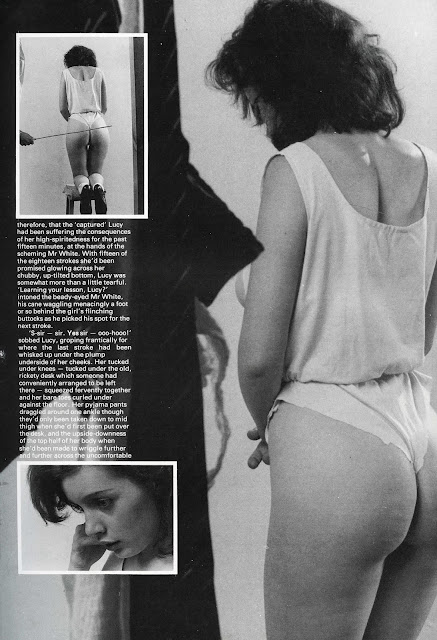 ‘Run along,’ said the Housemaster and Lucy whispered ‘thank you sir,’ and stepped sideways, dubiously, to the door. The door handled turned, seemingly of its own accord, and Mr Folley, the Headmaster, bustled in.
‘Goodness!’ he said, eyebrows raised and glance swooping down to pubic level in time to catch a glimpse of honey-blonde hair at the base of Lucy’s belly before she snatched the hand holding her pyjamas across in front of her nakedness. 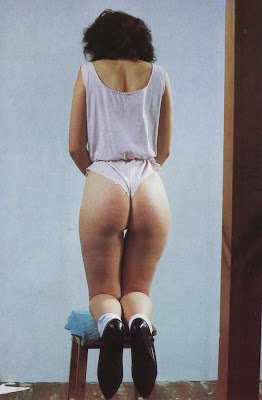 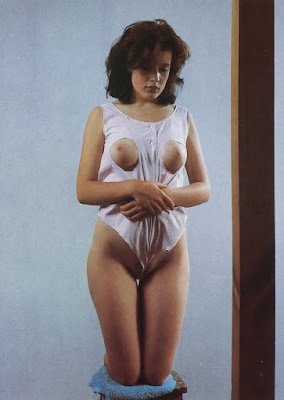 ‘Oooh —’ bleated Lucy, cheeks flushing crimson at this fresh humiliation; the Headmaster turned to Mr White with a look of surprised contrition on his face.
‘Do beg your pardon, Mr White. ‘Fraid I hadn’t realised…’ he tailed off and followed the tender-looking glow of Lucy’s bum as she scuttled through the door and scampered along the corridor, her bottom waggling bouncily behind. 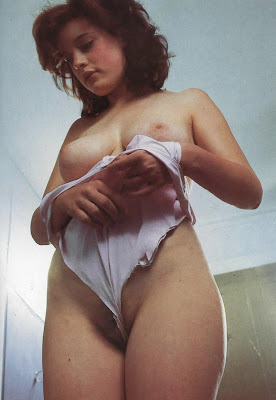 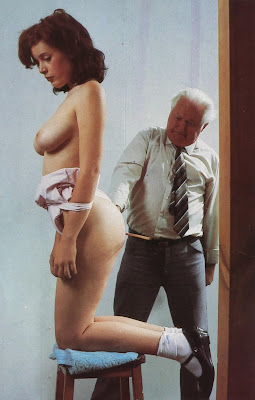 ‘Just finished, Headmaster,’ said Mr White, his tone a little defensive… ’Did you want to…?’
The answer to his uncompleted question stood behind Mr Folley, one of the sixth form girls dressed in a distinctly non-uniform way in a pink one-piece blouse and shorts outfit, and that none too generously cut.
‘Er… yes. If that’s alright —?’ 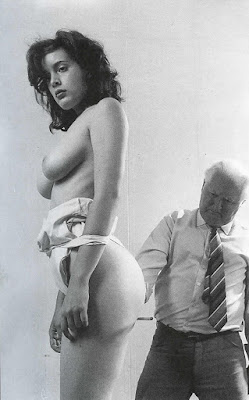 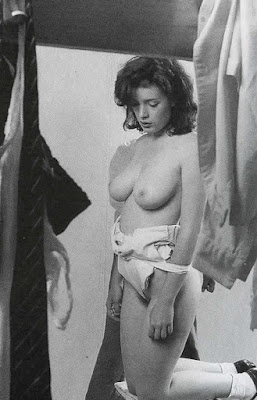 The Headmaster too seemed slightly on the defensive; he slipped the scissors, which he had in one hand, into the pocket of his jacket.
‘Of course,’ said Mr White, and stepped aside. The Hheadmaster took over occupancy of the room with less than his usual panache.
Biting her lip and with eyes averted, the girl followed, hovering just inside the doorway while Mr Folley said a rather embarrassed ‘Thank you’ and Mr White his eyebrows now raised in their turn, pulled the door shut behind him. 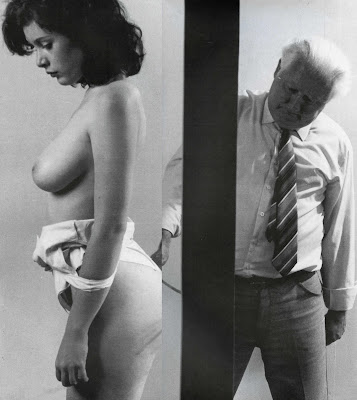