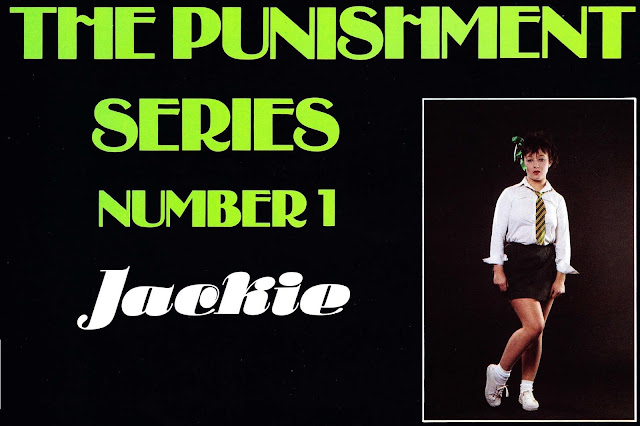 Introducing a new, occasional series in which we photograph girls who are experienced in CP, either voluntary or involuntary. The punishments depicted will faithfully reflect the girl, her background or even her fantasies. The girl herself will always have something interesting to say and all transcripts will be genuine.
Our first subject is Jackie, who has just been reintroduced to CP, by the interviewer, a Janus staff member, following a period of a few years’ forced abstention. These are her actual words… 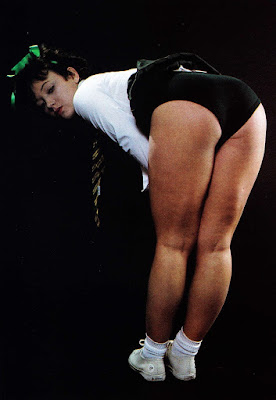 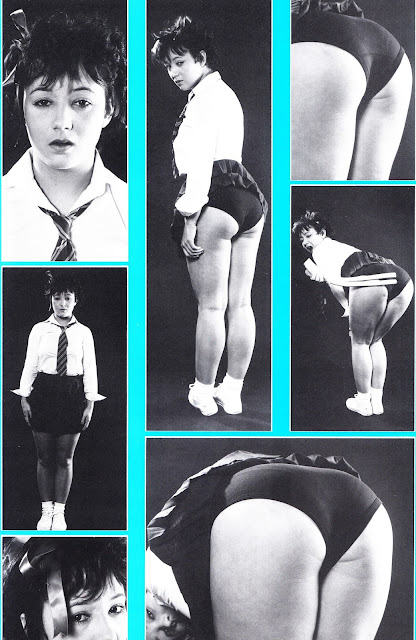 JANUS: Right through your childhood?
JACKIE: Yes, if I did something wrong that’s what I would get.
JANUS: Were they hand-spankings?
JACKIE: No. With a belt by my father; my mum used to hit me with the dog’s lead.
JANUS: On your bottom always?
JACKIE: Yes. 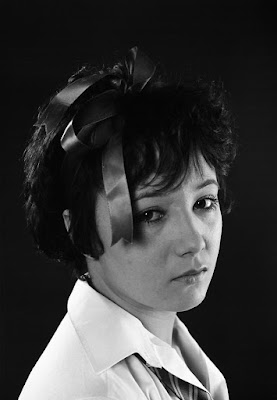 JANUS: Did you hate being punished in this way?
JACKIE: No, I got used to it I adjusted to it and I missed it when I didn’t have it. When these punishments stopped.
JANUS: Can you remember ever enjoying it? Did you ever find it exciting?
JACKIE: Afterwards I did. I never quite liked it when I was getting it, but afterwards when I used to go up to my room and cry, I liked it. 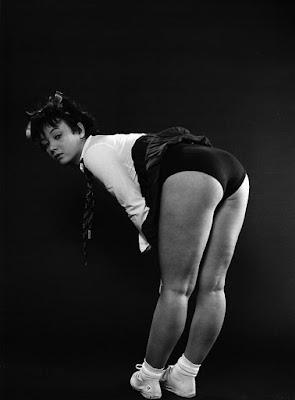 JANUS: What did you like about it?
JACKIE: Crying, the release, and I just felt better.
JANUS: What about your bottom? Did that sting afterwards?
JACKIE: It used to sting but it used to go away.
JANUS: Did it used to throb?
JACKIE: Yes. 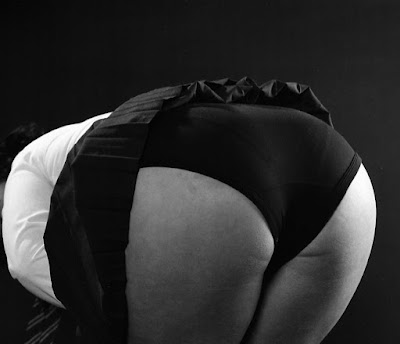 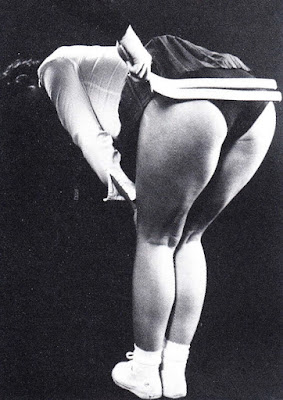 JANUS: How was the mood with your parents after punishment? Was everything forgiven?
JACKIE: Oh yes.
JANUS: When you were punished at that time, was it on the knickers or bare, or what?
JACKIE: There was no particular way, although I did get it on the bare bottom once when I was naughty — my dad came to my room and took me out of bed and spanked me.
JANUS: Were you often naughty?
JACKIE: Yes, my mother and I argued a lot And I was often got spanked for being rude to her — and many other things. 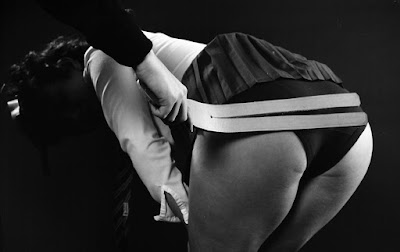 JANUS: When did these punishments stop?
JACKIE: When I went to America to live with an aunt and she punished me differently, she used to keep me in. And that didn’t bother me.
JANUS: Did it work?
JACKIE: No.
JANUS: You preferred to be whacked?
JACKIE: Yes. 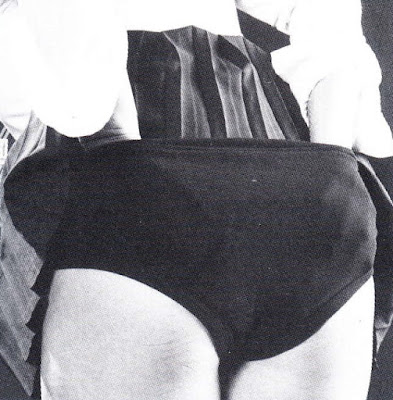 JANUS: Because it’s all over?
JACKIE: Yes.
JANUS: How hard would you get hit?
JACKIE: Sometimes it was really hard, and then it would hurt — for a while. But other times he wouldn’t hit me that hard and I would make-believe he was doing it harder than he was.
JANUS: Would you pretend to your father that it was hurting more than it was?
JACKIE: No, it was something I kept to myself. I liked to imagine he was really making my bottom hurt. Much more than it actually did.

JANUS: What would you have been wearing when you were punished by him?
JACKIE: Pyjamas mostly, or a nightie with knickers. But they were thin material, and you could still really feel it through them! It wasn’t much different to getting it on the bare.
JANUS: Were you punished in your bedroom, or downstairs?
JACKIE: Anywhere. There was no formal ritual.
JANUS: How many strokes would you get?
JACKIE: At least six. Often more. 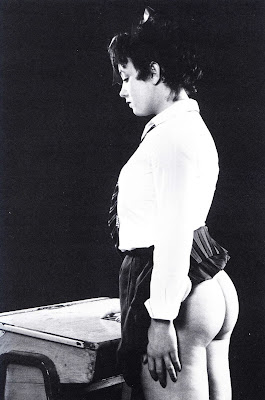 JANUS: Was the mood angry, or more dispassionate?
JACKIE: It was always in anger. And then I would be frightened again. But once the beating started, I would be kind of laughing inside.
JANUS: Moving on now to the period in your teens when you weren’t being spanked at all. Did you ever think about it then?
JACKIE: Yes, I used to get frustrated. All the years I’ve been in America I have been really depressed and I couldn’t get my emotions out any way. I would, say, have a drink. 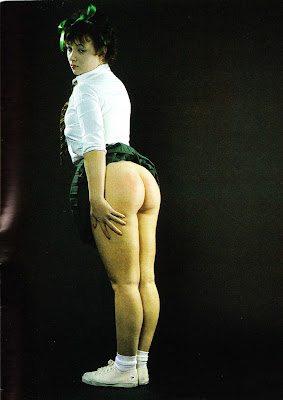 JANUS: So you were never corporally punished in America?
JACKIE: No.
JANUS: A lamentable state of affairs. How long have you been back here in England this time?
JACKIE: Two months.
JANUS: How does your being depressed in America relate to your lack of punishment?
JACKIE: Well, my aunt would say, for example, that I wouldn’t be allowed out for two days. At first I used to think, that’s better, I’m not getting spanked. But during the punishment I used to feel that I wished I was getting spanked. 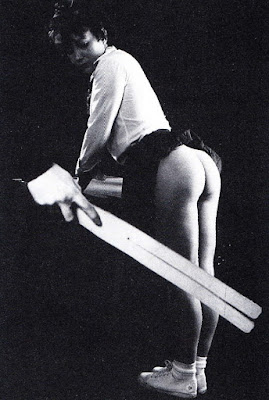 JANUS: Why was that, do you think?
JACKIE: I don’t know. I must have enjoyed it
JANUS: Did you think of it as a sexual thing?
JACKIE: Yes. And I had a friend who used to get spanked in America. I never used to let my feelings out but she used to say how much she enjoyed it.
JANUS: How old was she?
JACKIE: She was in her late twenties, early thirties. She was more a friend of my aunt’s but I used to listen to her. 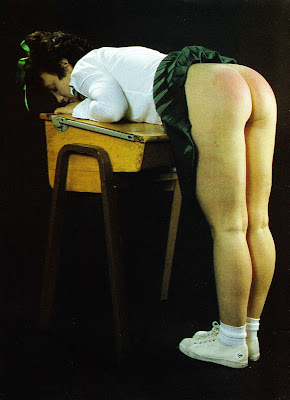 JANUS: Was she spanked as a punishment?
JACKIE: No, it was a purely sexual thing. Whenever she made love with anyone, she had to be whipped or punished in some way. When she used to tell me about her experiences, it brought back memories and gave me feelings, but I never told her about it. I never said anything.
JANUS: Can you remember the sort of thing she would say to you about it?
JACKIE: Well, she would get punished by her girlfriend. She showed me the whip and I was just growing up and finding out about things like that. 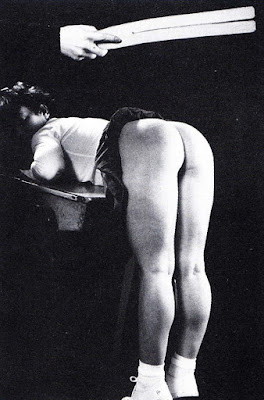 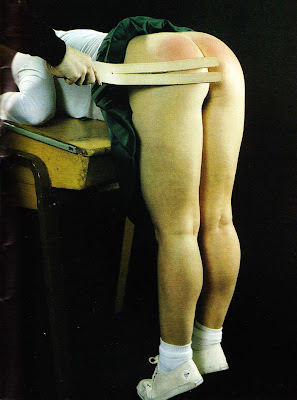 JANUS: And this lady said it was sexy?
JACKIE: Yes, she couldn’t get into sex without it and I was fascinated by this. I wanted to get spanked then but I couldn’t come out and ask for it. I was too shy about it… I never knew there were magazines on the subject or anything. I was embarrassed about it… I thought it was weird.
JANUS: But you have been spanked since then, haven’t you?
JACKIE: … Yes!

JANUS: When, Jackie?
JACKIE: When you spanked me, two weeks ago. I thought you were joking. Then I realised you were serious I was shocked. I was fascinated, I just couldn’t believe you really meant it.
JANUS: What did you feel when I spanked your bum?
JACKIE: I liked it. I felt different, sexy. I felt it from the waist down, just loose. Just really relaxed. 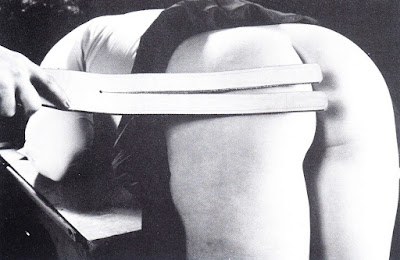 JANUS: Tell me more.
JACKIE: It allowed me to understand a little bit more about myself. I really enjoyed it. You spanked me to a rhythm. It was really different. Lovely… Then of course, the second time I came to see you I got caned. I felt really nervous, maybe because I didn’t know you and I didn’t know whether to trust you or not with the cane. After you had caned me a couple of times, I relaxed a bit. I knew it was safe. It was painful, but it was blissful too.
JANUS: How about when I gave you the strap?
JACKIE: It was bit painful at first, then as it was getting harder I just started to go numb. I felt as though I was floating. I couldn’t feel anything at all. 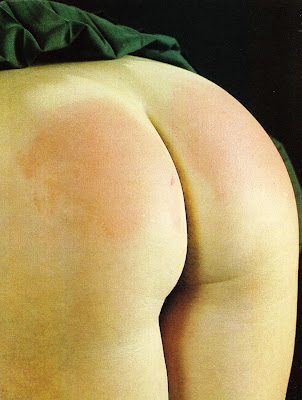 JANUS: Like ecstasy?
JACKIE: Yes. But when I sat down, my bum was boiling, it was flaming.
JANUS: What was it like sitting on it?
JACKIE: It felt good, I was floating. I had to stay for a few minutes to recover.
JANUS: Was it a sexual thrill?
JACKIE: Afterwards, on the way home on the train, I felt sexually aroused. 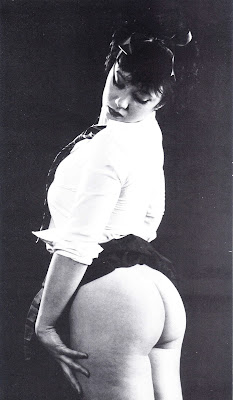 JANUS: When you got home, did you look at your bum in the mirror?
JACKIE: Yes.
JANUS: What did you think when you saw your bum?
JACKIE: I felt as though I shouldn’t look in case it put me off it. 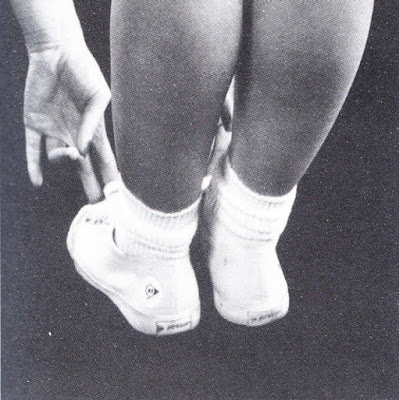 JANUS: Was it marked?
JACKIE: Oh yes, really badly. So I put TCP in my bath and had a relaxing hot bath.
JANUS: Did you still feel sexy?
JACKIE: Yes, I felt relaxed, in another world. 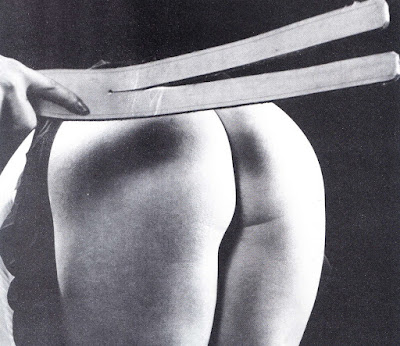 JANUS: All night?
JACKIE: Yes. I had a good sleep. I felt lovely. I didn’t care about anything, nothing bothered me. It got all my frustrations out.
JANUS: So it was more of a mental feeling than a sexual feeling?
JACKIE: Yes it was really. If I was with someone I loved I would have been turned-on. 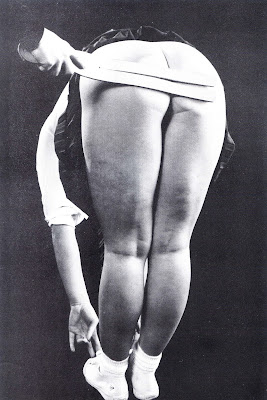 JANUS: Did you look at the marks again in the morning?
JACKIE: Yes, they stayed for a while, and then turned to bruises. My mum saw them and I told her I fell off a swing. She believed me, and it was like I had this wonderful secret.
JANUS: What’s your feeling about the experience now?
JACKIE: Well, rather than have a drink I would rather be caned. Though the strap actually is my favourite. 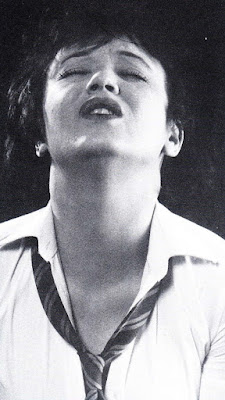 JANUS: Do you feel that you would now miss CP in your life if you didn’t have it?
JACKIE: Yes I would.
JANUS: Would you get really frustrated?
JACKIE: Yes, I would. 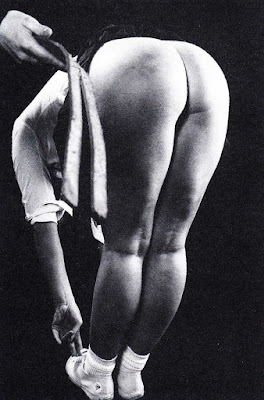 JANUS: Would you tell any future boyfriend that you wanted to be spanked? Or would you still be embarrassed to admit it?
JACKIE: No, I wouldn’t be embarrassed, I think that now I would tell him.
JANUS: You mentioned before that you have a boyfriend in America who has never spanked you, and that you told him in a phone call that you’ve been spanked.
JACKIE: He’s said he’d like to try it. He asks me to wear a short skirt for it. 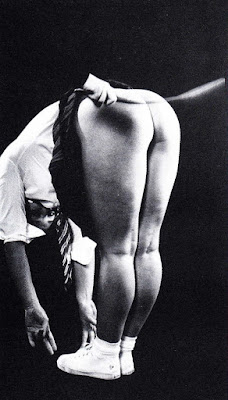 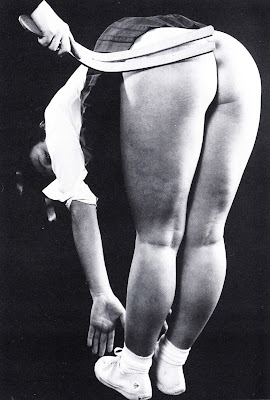 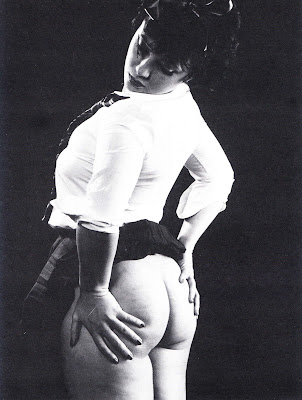 JANUS: Do you want to tell our readers anything else?
JACKIE: Only that more people should try it — Corporal Punishment — because it’s a great buzz. It’s better than booze, it’s better than drugs.
JANUS: So the ultimate effect it has on you is…?
JACKIE: Relaxation. It makes me feel happy and wonderful. I think it should be shared with someone who is also into the subject… Before you get punished, you feel frightened. Then when it happens it stings, it really does, but there’s this joy that comes with it. But the feeling afterwards is what I like best. It’s just complete letting go of everything that can drag you down. It’s incredible!

JANUS: A kind of therapy maybe?
JACKIE: It is, for me. Thank you for doing it to me — I would never have found out if you hadn’t wanted to punish me.
JANUS: Thank you what, Jackie?
JACKIE: Thank you, sir!
JANUS: That’s better. 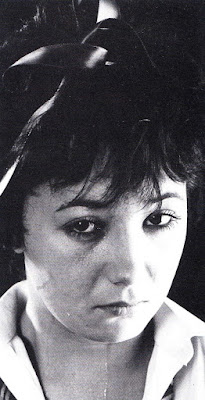