Annie could feel the draught under the door, the age of the house revealed in its gaps like wrinkles on a face. In white shorts and sleeveless yellow T-shirt, she was not dressed for the coolness of the evening.
The dress, however, was not voluntary, but compulsory. He had specified exactly what she should wear, and the time at which she must report. Annie wasn’t even sure if the caretaker was allowed to punish her, but the risk of querying his motives could lead to an even more severe punishment at the hands of someone in real authority. 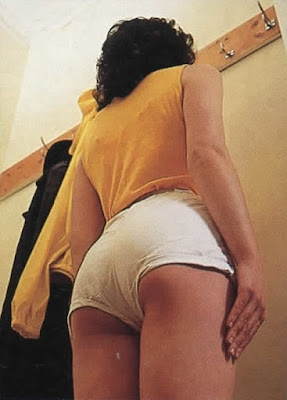 To be caught out once in a day was careless, to be caught out twice as she had been was downright foolish. The mild caning the caretaker had administered during the thunderstorm in the morning would be as nothing to the swishing she expected to receive in a few minutes.
Not wearing a watch, she wondered whether he had forgotten. It seemed almost fifteen minutes had passed since she had waited outside his workshop.

She was a pretty girl, dark curls tumbling round attractive features. A good bust and a well-proportioned body. Sport had kept it trim since leaving school last year.
Leaving school. And yet here she was being thrashed as she would never have been punished at school. Annie hitched her shorts down over her bottom, and shifted her weight to the other foot. The creaking floorboards of the old house announced the caretaker’s impending arrival. He turned the corner, and she noticed the crook handle of the cane sticking out from behind his back, its thin, punishing tip evident on the other side.

‘Yes it does. No need to be shy with me, seen it all. No point in giving you the benefit of no protection, neither. Just makes my job harder.’
Annie could think of no intelligent response, and remained silent. He didn’t move.
‘How did you find your last tanning?’
‘Not too bad, sir…’

‘Well, this one’ll be a bit harder, I can tell you.’
‘Errr… are you going to cane me here?’ came the nervous question.
‘Yes… lock the door and we won’t be disturbed. Then let’s have those little shorts undone, shall we?’
Looking him in the eye, Annie unzipped the shorts.

‘Turn around, girl, and take ‘em down.’ She wriggled and pushed the tight fabric over the swell of her rump as he admired again the firm roundness of her cotton-covered bottom. The shorts now rested round her knees.
‘D’you think you deserve to be tanned?’
‘Errr, I suppose so Mr Briggs.’
‘Yes or no?’
‘Yes.’ She sensed his irritation.

‘Then apologise and ask me to do the job.’
There was a pause as Annie figured out what to say. She still faced the door, hands at her side, as she intoned: ‘I’m sorry for being disobedient, and I deserve to be punished for it, sir.’
‘Ask me to do it, then.’ Finally Annie got the drift.
‘I apologise for my disobedience, and I request that you punish me by caning my bare bottom.’

‘That’s better.’ He paused. ‘Hard.’
‘Hard,’ Annie repeated.
‘Now take your knickers down.’
Annie’s twin half-moons were slowly exposed as she pulled the cotton knickers down to join her shorts.
She looked behind her, but he hadn’t moved, the cane still gripped between his hands. ‘Shall I bend over, Mr Briggs?’

There was another long pause as he considered the request.
‘No, no… kneel up on that there stool, and stick your bum out.’
He sliced the cane through the air two or three times, and Annie saw its vicious curve, eager to release its punishing finger across her bare cheeks. The cane continued to quiver as he shook his hand menacingly at her.
‘Damn good hiding, that’s what you girls need. And that’s what you’re going to get.’
He lifted his hand and slapped Annie’s right cheek noisily, the imprint of his palm swiftly evident. 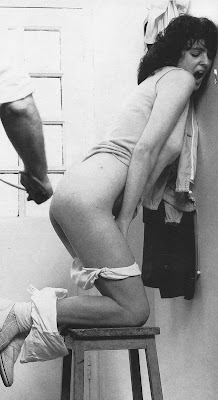 Standing at her right hip, he opted for a back-handed stance.
‘Stick it out, girl!’ he bellowed, and Annie hollowed her back to present her bare bottom for his attention.
‘How many am I going to get, sir?’
‘You’ll find out soon enough, won’t you? You can count, I hope?’
He laughed wheezily, and coughed.
Without warning, he spun and lashed the malacca with amazing force into the girl’s unprotected rump. Her yell of pain bore witness to the effectiveness of his backhand.
‘Well taken,’ he admitted. 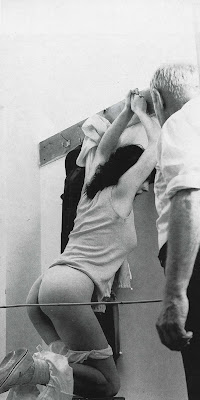 Annie’s breathing was laboured. She had barely time to think about the burning across her rear before the cane sliced once more through the air, its arrival prefaced by a low, short, humming whirr.
She gasped. ‘Christ, that hurts!’
‘No need for blaspheming,’ he grunted as he paced away, slashing the implement through the air in practice strokes, before returning to deliver a third and fourth in quick succession which made the tears flow, Annie’s shoulders heaving with sobs as she struggled to hold her uncomfortable position on the stool.
‘Sit down for a moment, girl.’ Annie climbed off and sat with relief on the cool wooden stool, the burning in her bottom tender even on its smooth surface. But the break was not long. 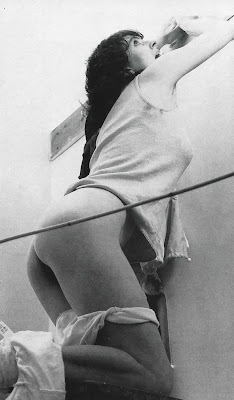 ‘Up you get… four more to come.’
‘Four? But…’
‘Get up there, and don’t argue, or it’ll be six.’
Reluctantly, Annie resumed her submissive position, as the cane continued its enviable task.
She caught a movement out of the corner of her left eye, and glanced round. The smiling faces of two of her dormitory colleagues were glued to the glass frames, unnoticed by Mr Briggs, as Annie screamed once more. The glass steamed up in a moment as they laughed silently together at Annie’s discomfort.