Come on England! A patriotic tribute from Privilege Club 15. 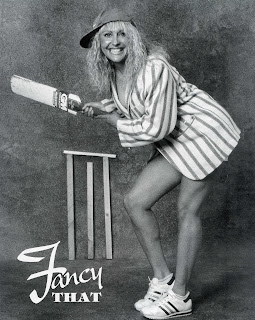 At Little Snoreton-on-the-Mire in the Cotswold heartlands they take their cricket seriously. When the deliciously pretty Miss Melinda Dewsbury-Saint took it into her head to join the austere men-only club as a playing member, it threw the selection panel into a frenzy of debate.
Lawyers were consulted, and the legal reading was that, on grounds of her sex alone, Miss Dewsbury-Saint could not be excluded. The only reasons the Club could legitimately use for turning her down — as, to a man, they wished to do (please note here that the younger, playing members of the club had not been consulted) — was if she were to prove unsuitable in some other way. 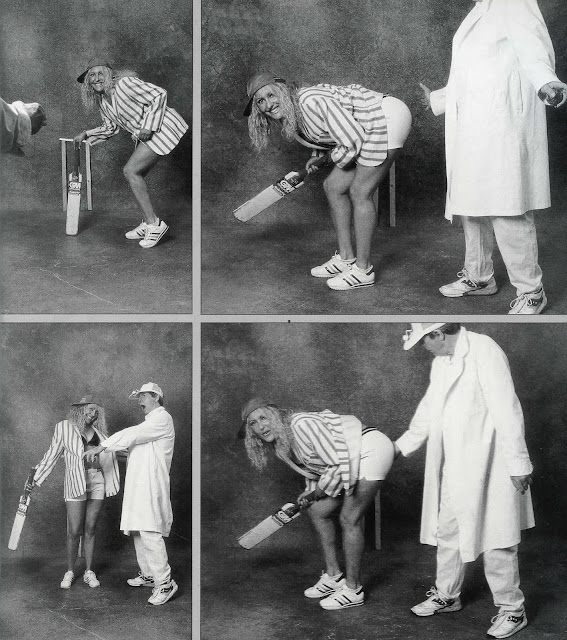 Well, on the grounds of breeding and background the young woman’s pedigree was impeccable. Daddy was a wealthy landowner hereabouts, and many of those on the board had reason not to wish to offend him. Mummy was an active force in the village, from flower-arranging to agitating for a change of vicar when the old incumbent fell asleep at the pulpit one time too many and crushed a dozing choirboy. 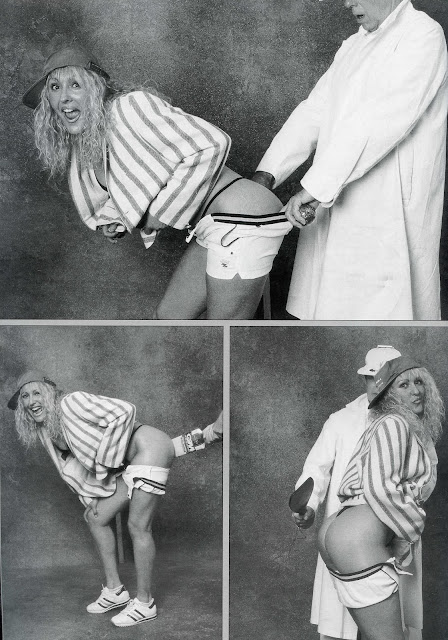 So, with this in mind, dear members of the Privilege Club, you are asked to consider what you would do under the circumstances. The grave duty of interviewing young Melinda fell to Redvers Garrotte, a local alderman, whose father had been the only butcher for miles around. Redvers, a no-nonsense pragmatist, had served as umpire for the village team since the last century, and it was with a matter of pride that he sported his father’s best butcher’s coat when standing behind the stumps to give middle-and-leg or raise his index finger in gesture of dismissal. 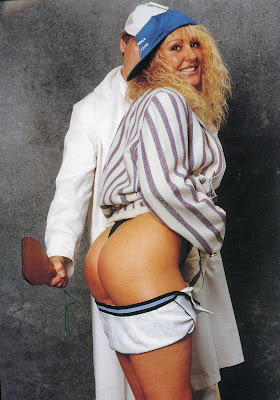 On the day appointed, in Melinda sailed. ‘Let’s get down to it, Pop,’ she said in a breezy voice so upper-class that it could crack a chandelier at fifteen paces. ‘I’ve brought my bat and I want to play, and if any of you silly old fusspots tries to stop me I’ll sue.’
Redvers Garrotte was not entirely happy at this opening to what was to have been a brief but telling peroration on his part in which he would have this uppish young lady running howling for the boundary with her dainty tail between her legs. 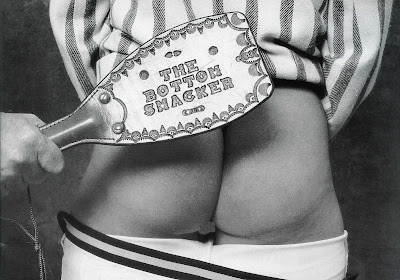 ‘Now look, Miss Dewsbury-Saint,’ he harrumphed. ‘Cricket isn’t really a game for the female of the species. Let’s put a stop to this nonsense right here and now, and I’ll let your father know we’ve had a chat and you’ve decided to withdraw your application.’
‘Stuff and rubbish,’ rejoined the spirited girl, placing her bat before the wicket. ‘Give me middle stump, then bowl me a few balls and you’ll see what I can do.’ 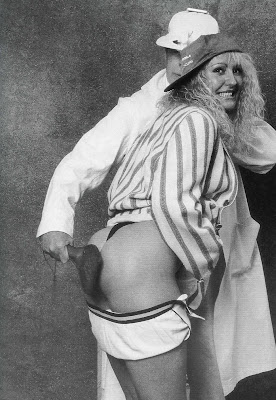 So sprightly was the maiden’s tone, Redvers found himself not only positioning her bat as requested, but bowling a cunning googly which she read in the air and smote lustily back at him to speed through his legs to the boundary.
‘Well, can I join?’ piped Melinda with the most enchanting grin seen for miles around for many a year. 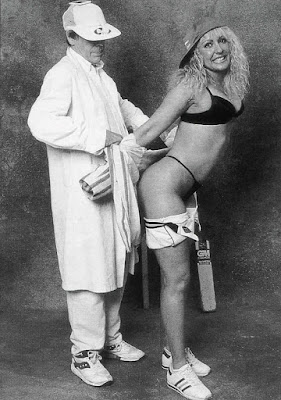 Garrotte knew he was going to have to work harder if this girl was to be called ‘out’ and the status quo at Little Snoreton C.C. re-established. He owed it to the membership. But this girl had the eye of an eagle and the speed of a striking snake. It would be humiliating to all the other players if a mere female, playing the sex discrimination card, became their best batsman… er, batsperson. Preposterous, in fact. What on earth was to be done? 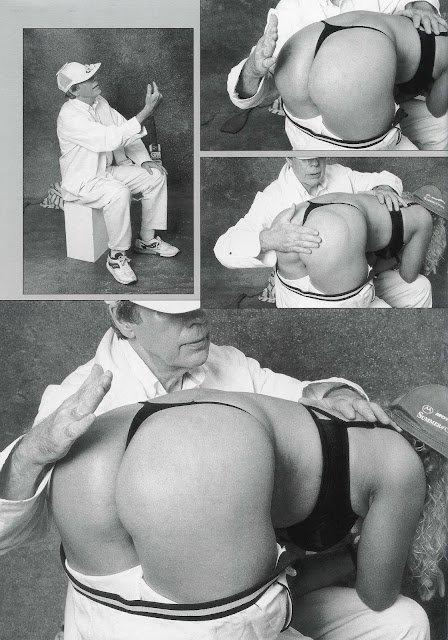 ‘I’m afraid you’ll have to be excluded on the grounds of improper dress,’ said Redvers Garrotte ponderously, striding up to her and inspecting more closely, and with no little shock, what this brazen young woman had chosen to wear. ‘Members of this Club do not wear garishly-coloured blazers, blue caps…’ Here he opened the blazer and recoiled at the sight of a bare midriff. ‘Nor black appurtenances to their appendages,’ he gasped. 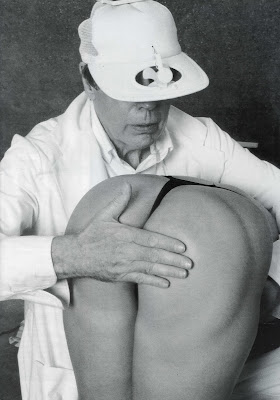 ‘Are you referring to my bra?’ said Melinda, with that wicked smile which threatened constantly to unman him. ‘I’ll have you know that’s Christian Dior.’
‘I don’t care who or what it is,’ shouted Garrotte, ‘you can’t wear it as a member of this Club. You and I have some serious talking to do, young lady…’ 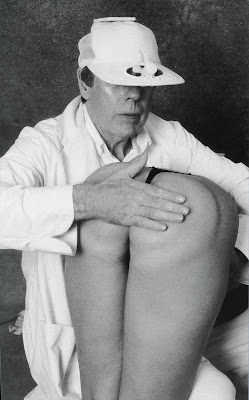 ‘I don’t care a fig or a fish for your silly rules,’ sang out Melinda Dewsbury-Saint, taking up her stance at the wicket again in readiness for another ball. ‘Try me with something faster and you’ll know what six looks like with a capital S.’
Redvers Garrotte floundered. ‘Now just you wait a minute, young lady,’ he said, ‘I’m upbraiding you about your execrable dress code. Where are your white flannels?’ He gaped down to where the girl’s rear end, encased in skimpy shorts tight enough for splitting, were pushed back flagrantly towards him as she readied herself with the bat.

At least the shorts were white, he thought. But no man, surely, could have resisted such a sight, whatever colour they might have been. Incorrect dress it might be, but it was the most delicious vision seen for many a moon in these sensible surroundings. Redvers drew back his hand and delivered a mighty smack to the gorgeously girlish rondures. 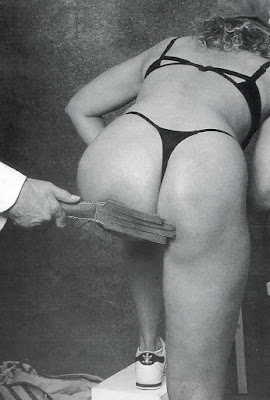 ‘Ow!’ yelled Melinda. ‘You slapped my bottom.’ Then the grin returned, for she knew she had him.
‘Correct,’ he replied. 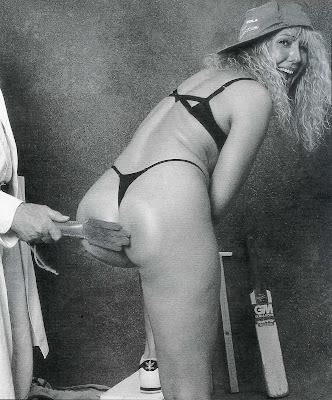 ‘I could have you up for that.’
‘I agree that you could try. There are, of course, no witnesses.’ 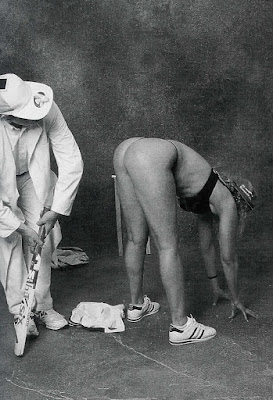 ‘The fact remains that you smacked my bum,’ she chirruped, with a glint in her lovely eyes that threatened hell and damnation for any man who messed with her. ‘And we both know it, and you’re an honest man. Why did you do that?’ 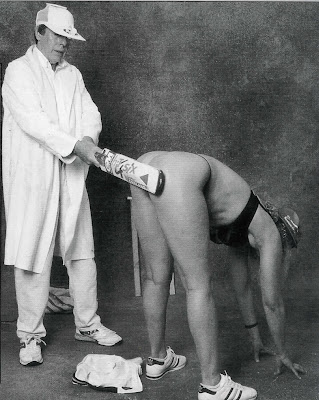 ‘Because,’ said Redvers Garrotte heavily, ‘my greatest joy is in spanking feminine bottoms, and yours — ill-dressed though it might be — was irresistible.’
For a moment, even the loquacious Melinda was lost for words as she stared at him. 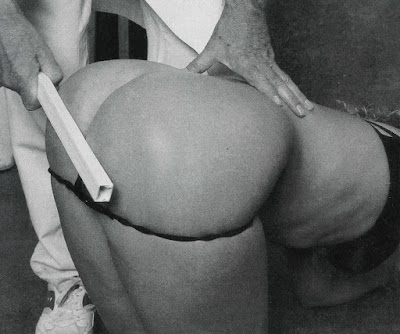 ‘It’s a pleasure I get all too rarely,’ Redvers went on to admit, aware that he might be damning himself forever. Suddenly he didn’t care. ‘You, Miss Dewsbury-Saint, have the most gloriously curvaceous, maddeningly ripe and springy, temptingly maidenly arse it has ever been my joy to behold, let alone lay hand to. It was more than flesh-and-blood could stand not to give it the smack it so signally deserved on account of your brash assumption that men were born for you to walk over and make sport with. This is a proud Club, and we are proud people, and…’ 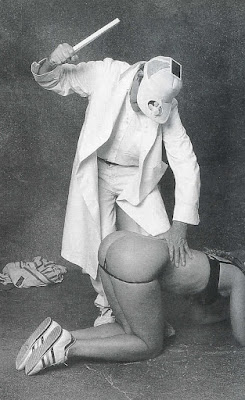 ‘Okay, okay you can cut the crap,’ Melinda interrupted, eyeing him keenly. He seemed solid and square, the kind of man she might just take this from. ‘Let’s do a deal. Know what I mean?’ Blue, beautiful eyes gleamed up at Redvers. ‘I want to prove to your fusty old fuddy-duds on the selection board that I’m woman enough to whale the pants off any opposition with this bat. I can bowl too, and field. But if you want to use this predilection of yours to batter my butt, you can have full access to it for the next half hour. After which it will be all mine again, and hands off — but I shall expect to go in at number four in next Saturday’s game against Lancingford C.C. Do we have an agreement? A tacit understanding, as it were?’ 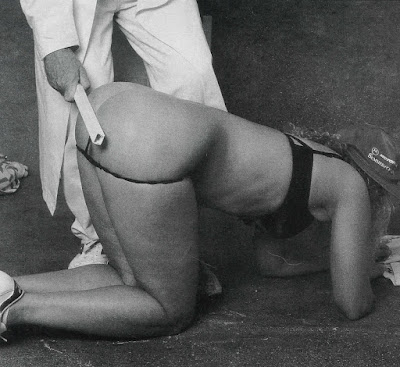 ‘If you can sit down,’ he muttered grimly.
‘I shan’t need to sit down to go out and bat, shall I? And I’ll drink the victory champagne standing up if needs be, and only you and me will know that under my tight white pants of skimpy cotton —’
‘Flannel,’ Redvers insisted. 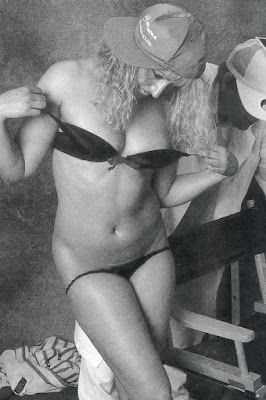 ‘Okay, flannel — my arse is as red as two Cox’s pippins after a record summer.’ Again came that glint. ‘A deal?’
Redvers gazed steadily at the girl. ‘It’s a deal,’ he said. ‘Give me that bat.’ He thereupon wrested it from her, and the extraordinary special selection meeting commenced with a few fine off-side drives and sweeping cuts to the twin spheres of the applicant’s fundament. 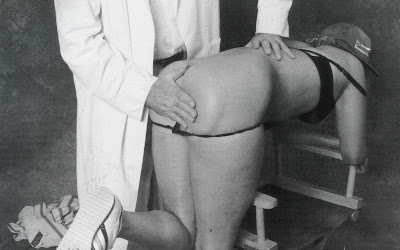 Quite how it was that our alderman-umpire found lying about in his cricket bag a leather paddle and three-fingered tawse with which to continue his completion of the official signing-in of Miss Melinda Dewsbury-Saint to the Little Snoreton Cricket Club can only be put down to that worthy’s abiding fascination for the application of corporal punishment. He even used the cross-piece that acted as wicket-bails for the applicant’s induction to the Club, hard and stingingly across her pertly perfect posterior which, by end of play that day, was seething as fiercely as an Australian sun on the urn of the Ashes. 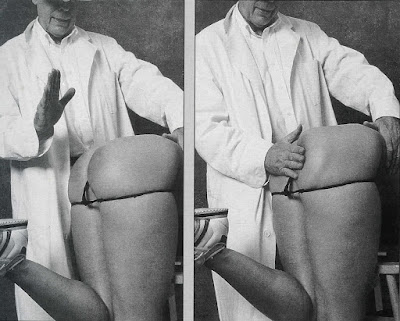 When it was over, so to speak, Redvers Garrotte handed Melinda back her cricket bat. ‘Consider yourself accepted to the Club,’ he said. ‘But I will of course be
required to review your player-membership on a fairly regular basis. Is that a deal, Miss Dewsbury-Saint?’ 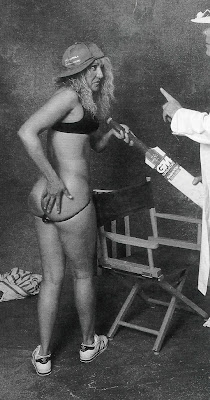 ‘If that’s what it takes,’ the girl said. The grin had gone and their understanding was complete.
The following Saturday she scored 69 not out and won the game for a delighted team, who chaired her from the field.
Well, wouldn’t you? 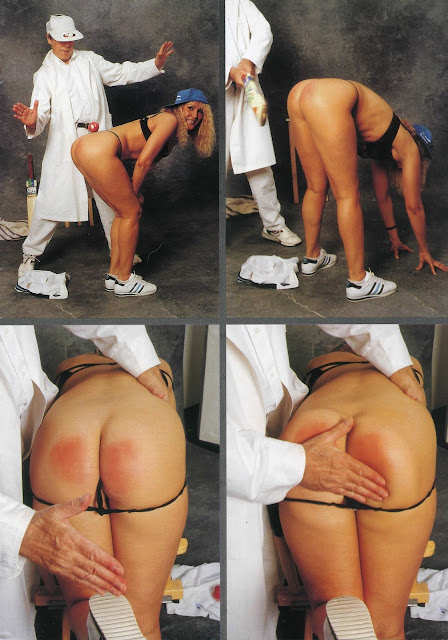