The key is turned in the lock and Katherine’s tummy turns somersaults as she is told to kneel up beside the sink and hold her dress up as high as it will go.

Warm hands, assuming a familiarity which their strange masculinity surely shouldn’t be entitled to assume, outline the shape of her waist and her hips and then confidently slide her knickers down, unabashed by the girl’s faint bleat of protest and the sudden mutinous tension which tautens her body.

She clutches her dress to her breasts and tries not to wangle her bottom away from the hand which first cups her plump bottom-cheeks then begins to slap them methodically, left and right, trembly resilient young buttocks which have resounded after enough to the chastising palms of the nuns at her previous school. 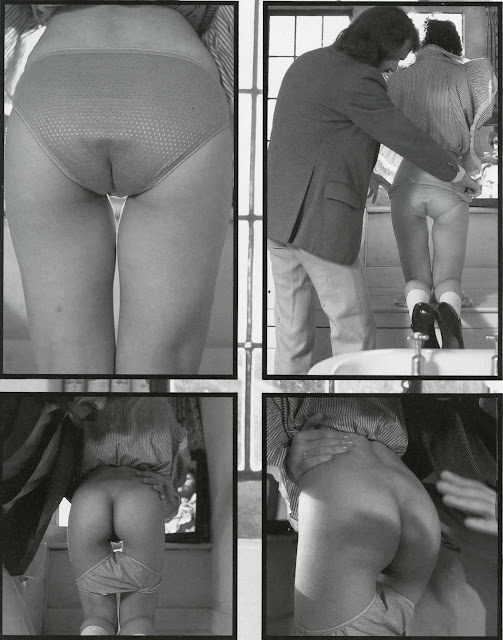 Caught between a restraining hand up under the front of her dress, and the hard-spanking hand behind; trapped too, in that uncertain limbo of guilt and dutifulness which a religious education instils in a girl of tender years. Katherine kneels up as she might have done on a hassock, at vespers and turns her eyes up to the bright sky beyond the window, tight-lipped and damp-eyed, pink-cheeked and helpless to prevent her assaulted bottom getting squirmy under the provocation of the slaps which sting her bum-cheeks and her legs. 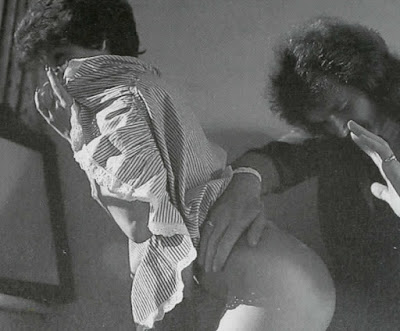 She is half-unconscious of the slipping down of the hand in front, and that part of her mind which notices it, accepts it as simply a part of the whole, another aspect of the same humiliation which she has somehow brought upon herself, no doubt deservedly, though she cannot think what she might have done to have earned a punishment.
Tears roll down her cheeks and her tight-lipped resignation becomes slack-mouthed sobbing as her bottom jerks and swerves away, side to side, yet comes obediently back for another solid spank each time.

At last it stops. ‘Keep your dress up,’ says the Reverend Walters. ‘We’ll have no false modesty here.’ He unlocks the door and leaves her there in front of the window, and the cool air wafts gently around her spanked buttocks and dries the tears on her face.
After a while the Reverend gentleman comes back and says she can go down to supper. Katherine slips her knickers back up and says, ‘Thank you, sir,’ and goes off to find the refectory, though she has no idea where it might be in this, her new school. 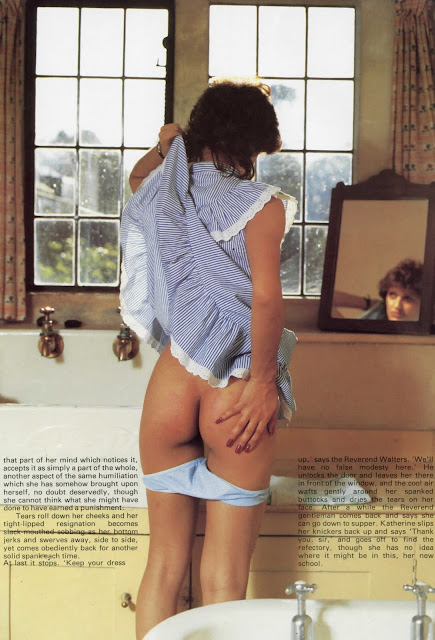