Party Games at the Priory 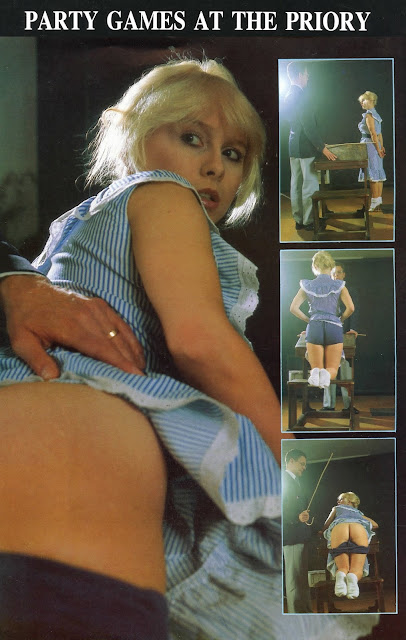 Jennifer and Julie had been volunteered. A little reluctantly they stepped forward into the centre of the room. A quiet ripple of applause from the assembled guests greeted them.
Sir Julian announced the game. ‘It’s Tug-of-War this time girls.’ Another bout of quiet applause as both girls were helped out of their party dresses. Standing in just bras and knickers, they listened as the rules of the game were read out. ‘Stand facing each other, girls. Close together.’ Eager hands pushed the two girls together, until they were touching each other. Soft bare skin against soft bare skin. Toes touching toes. ‘Now put your arms around each other.’ There were a few quiet sniggers from the audience as the girls adopted their intimate pose. Behind each girl, the guests lined up. The traditional two teams for Tug-of-War. ‘Are you ready? Get set… Go!’
The two lines of revellers began to pull away from each other, and the two girls began tightly to hold each other, slim bare arms wrapped about each other’s body. Of course, the girls would not be parted. That was hardly the aim of the game. Behind Jennifer and Julie, at the head of the two columns of guests was a young man. And each of these young men was clutching, not Jennifer, not Julie, but their knickers. Flimsy white knickers. Just right for party-going. But hardly appropriate for the roughness of a Tug-of-War game. It would only take a few moments. Soft round bottom-curves were being exposed as the flimsy fabric was stretched out of shape, the strain of the teams being taken by the few inches of thread which held the girls’ pants together. Jennifer and Julie had closed their eyes. They knew it was bound to happen. The tell-tale ripping of thread and fabric. They found security in each other’s bodies, knowing that one of them would have to pay the penalty for losing. The guests were cheering now, encouraging each other to pull even harder. Julie found it hard to keep her long legs taut, with young Colin right behind her, with both his hands holding tightly to those few inches of straining fabric. It didn’t take long. Despite the noise of the occasion and the inevitable ribald comments from further down the two lines of guests, everyone heard the tell-tale sound. A quiet gentle noise of knickers ripping apart. Half the guests fell back into each other as Colin waved Julie’s knickers in the air. ‘I’ve got them!’ Young Julie, suddenly feeling very exposed and vulnerable, pulled herself away from Jennifer. ‘Oh Christ! It’s me!’ Naked save for her pretty lace-trimmed party bra, which no doubt would also be taken from her before the evening was out, she stared upwards, to the little white tangle of distorted fabric which had been her knickers. In an unconscious gesture, her hands went behind her, to protect her bared bottom. 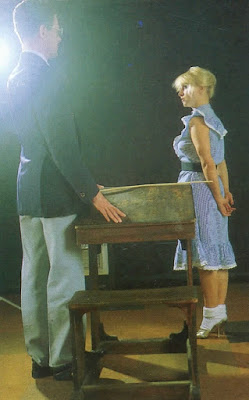 Sir Julian was in his element. ‘Come on, Julie. Time for your penalty!’ She found herself standing in the centre of the room again, but this time she was alone. The guests stood back, against the walls, waiting and watching. Her anxious eyes followed the movements of the host, as he walked to the side table and picked up the trap of assorted nuts. Carefully, without haste, he selected ten evenly-shaped nuts, which were all about the same size. The guests watched in silence as he stooped, and placed all ten nuts in a neat row upon the carpet. Striding to the opposite end of the long room, he collected a thin yellowing bamboo cane. It quivered in his hands and the room became hushed. He stopped again, placing the cane upon the carpet, some ten feet or so away from the line of nuts. Julie was staring at it. Transfixed. Knowing that Sir Julian intended using it on her. On her bared bottom. Knowing that all the guests wanted to see her getting caned. He pointed to it. ‘That’s the finishing line, young lady!’ She was told to kneel down behind the line of nuts. Right down, so that she was resting on her knees and elbows, her chin touching the soft carpet. She realised that she would need to spread her legs a little to maintain her balance. And she knew what all the guests behind her would be seeing. Using her nose, each nut had to be pushed across the room until it came to rest against the cane. Ten times she would need to cross the room, her bottom tightly-curved, all her girlish secrets revealed to the guests’ delights. And she would need to shuffle backwards and forwards, nose to the carpet, on her elbows and knees, competing against the clock. Ten nuts in five minutes! It was an impossible task! Julie knew it was impossible. So did Sir Julian. And so too did the guests. 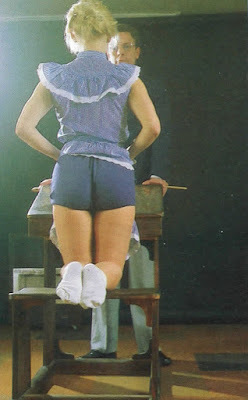 Time was called. The guests applauded. They had eagerly encouraged her, enjoying the spectacle as Julie crawled ungainly around the carpet, chasing hazelnuts, occasionally reaching the intended goal. Reminded as she reached the cane each time, that it would inevitably be used upon her. She tried her best. Five nuts were pushed across to their target. She collapsed exhausted against the soft carpet, knowing the score. Five nuts remained. Five strokes of the cane would be her penalty.
The cane was absolutely excruciating. Especially in Sir Julian’s experienced hands. Bent forward across the end of the long table, face down, legs apart, bottom fully available, Julie reached out and clutched the cold edges of the oak for strength. The long thin streak of pain hovered above her bare bottom and each guest seemed to freeze, momentarily. The familiar sibilance of smooth bamboo whistling through the air. Bamboo worn smooth by frequent firm application to the bared bottoms of errant young women. And then the awful crack as the three-foot length of cane bit right across her soft curved bottom cheeks. A split-second of nothingness. And then that awful fiery burning pain. She yelled, and the guests applauded in response. She kicked her bared feet against the carpet and swore silently to herself. The streak of red across her bottom grew bright crimson. Sir Julian stepped back, and smiled. The cane was raised again. Young Julie was going to really feel these strokes. Each and every one of them. It was always so much fun, party-time at the Priory. There were so many games to be played. So many penalties to be paid. And it was the perfect way to discipline a cheeky young madam who had been asking for a thrashing for so long. Yes. This would be young Julie’s night! Though he had plans too for another half-dozen of his young female guests. Young Michelle in the blue and white dress who had cheeked him that time in town. And Miss Jane, the arrogant blonde who had poured wine over his favourite armchair. And that little minx Janice. She had been displaying her knickers half the evening, encouraging the young men. Oh yes. The night was young. There were numerous games to come. Michelle would lose. And so too would Jane and Janice. All three would lose their knickers. And all three would have their silly pert cheeky bottoms soundly caned. 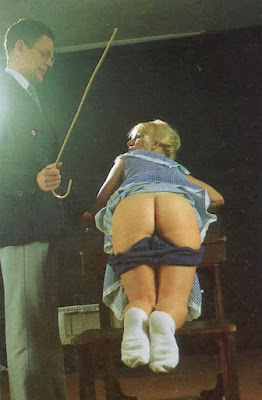 Sir Julian gave Julie her second stroke, carefully applied just an inch or less below the first, and she yelled again, her bottom rising towards him as she bucked forward. Silly things, these girls. They never could resist a good party. The food and the wine, and the possibility of a little extra-mural sex behind the curtains. He lined the cane up for the next stroke but a particularly juvenile shriek distracted him. He turned. Opposite him, a pretty dark-haired girl blushed. ‘Oh… sorry…’ He smiled at her. She would be another for his list.
And as the caning continued, even the experienced and slightly worldly-worn Sir Julian felt a quiver of excitement. After all, he knew all about Julie and her young friend Jennifer. And he had caned Michelle last year. Jane and Janice too, were hardly strangers to him. But that new girl, in the corner? He glanced at her, noticing the soft ample curves of her bottom beneath a short tight black skirt. She would be a real treat.