Life Gets Tedious, Don’t it!

Story from Roué 7 by Nigel Powell

‘These girls will see me after assembly. Susan Roberts — Juliet Moore — Anne Peyton.’
Nice little selection there — look round the hall in a fatherly way
‘Those girls will know why, no doubt, though I need not go into the details of their misdemeanours —.’
Couldn’t very well. Couldn’t say, ‘Susan Roberts, who wrote ‘the Headmaster is a sex maniac’ on the wall of the girls’ lavatory.’
‘— but I will say this —’
Stand up straight, dignified guardian of morals.
‘— I am tired of these dreary little parades which assemble outside my study every morning.’
Liar, that’s what keeps the job interesting.
‘I would be a happy man if the general standard of behaviour in this school improved to the point where on just one morning no one appeared outside my study with some dismal tale of mischief or disobedience necessitating punishment.’
Bloody liar!
‘Now then, let’s see what we can do to achieve this improvement.’
Beam benignly at the assembled throng.
‘You may now dismiss.’
Clattering thunder of feet.
‘Mr Powell’
‘Yes, Miss Brown?’
‘I’ve been meaning to have a word with you about the new equipment for the Art Room —’
Oh God — again?
‘Look, I’m rather busy right now Miss Brown —’ Right palm itching, smacked bottoms in the offing ’— couldn’t it wait until later?’
‘Well, I suppose so’ Miss Brown miffed, wart at the side of her nose glowing pinkly.
‘OK then. We’ll talk about it during morning break.’
‘As you say, Mr Powell.’
Stupid bitch. Bugger off — and I hope your Art Room goes up in smoke from the fumes of that diabolical gum stuff you use.
Hurry from the hall. No, don’t hurry. Walk in a dignified way. Left, right, left — that’s better. Heels clicking on the concrete. Sounds like the Wehrmacht. Down the corridor, round the angle — there they are, the little darlings. Pale faces, clear skins, neat uniforms.
Let them wait a bit. Tease yourself.
Big red book, key to the cupboard, face composed into the ‘this is going to hurt you more than it hurts me’ expression.
‘Come in Julie.’
Anxious peep round the door, click of the latch as it closes — skirt halfway up her thighs, tie askew, hair silky bright in the sunlight through the window.
‘— dreadful record, don’t know why you can’t behave yourself — your name on every single page of this term’s Punishment Book.’
‘Yes sir — sorry sir.’
Bet she’s got those sweet little Aertex pants on again. Don’t suppose her mother realises what a temptation they are, skimpy and close-fitting round her little —.
‘You know I don’t like having to punish you —’ Damned liar! ‘— but, discipline must be maintained. Now then, you’d better come round here — that’s right — and slip these down — that’s a good girl — and now —’
Very pretty.
‘You’re getting heavier my girl. Too big to go across my knee soon.’
‘Yes sir —’
‘Now keep your bottom just so —’
Feels nice — all bouncy and warm and smooth. Take these down another inch or so. Smack, smack, smackity smack!
‘Ooooo - oow - ooooch!’
‘Well, you shouldn’t be a naughty girl Julie —’
‘N-no sir — oooogh!’
Lovely colour — this side needs a touch more — just here. And here.
‘Oooow — s-sir — oow!’
Well spanked sir! Not a blotch in sight — a beautifully even blush around both the little sweetheart’s cheeks.
‘There now — and you’ll be a good girl in future, won’t you?’
‘Ooch — yes sir, I will!’
Stand her up — help her pull them up.
‘Ooh — sir!’
That’s it.
‘Right. Run along now Julie.’
‘Yes sir.’
‘And send the next one in.’ 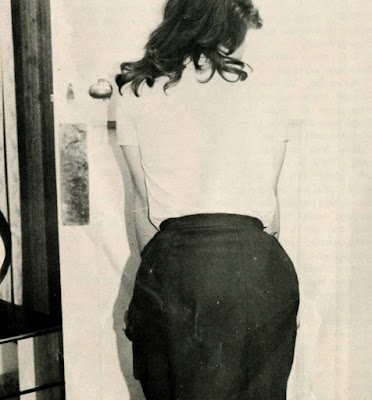 It’s like this every morning. Same old thing — knickers, bottoms, tearful sniffles. ‘I promise I’ll be a good girl sir!’ Of Course! They all say that once they’ve had their pants pulled down.
‘Good morning sir’
Clever, that. ‘Good morning sir,’ all bright and butter-wouldn’t-melt-in-my-mouth sir. Won’t wash though.
‘Just slip your knickers down Anne.’
A very crestfallen look, plump tummy, curl of pubic hair.
‘Keep your skirt up to your waist now —’
A humiliating shuffle across the study to press the front of her thighs against the edge of the desk, which will teach her not to be too bright in her comments in future, knickers slithering to her ankles as she bends forward, smooth curve of her buttocks offering themselves up meekly for punishment.
The thick ruler feeling heavy and wicked in the hand.
Whack!
‘Oooh —!’
Cheeks wobbling as she squirms her hips.
Thwack!
‘Ooooow —!’
Two wide bands of angry pink welling up across the plumpness of her bum-cheeks.
Smack!
‘Ooh — sir — no, please —!’
‘Just keep it still my girl —’
Whack!  Smack! Crack!
‘Now get along to your class!’
Trembling bottom ablaze with crimson, knickers being dragged up over the tenderness, a quick brush of the hand across the eyes, pretty lips moist and parted, cheeks damp as she leaves the study. 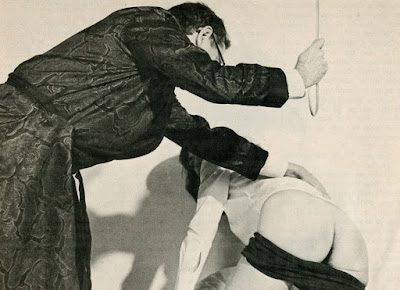 Susan appearing.
‘Close the door!’  Voice stern, Susan scampering to obey, skirt pleated, white socks, crisp white blouse and unbuttoned cardigan.
‘So — what have you to say for yourself?’
Eyes downcast, face flushed, feet fidgeting.
‘N-nothing sir —’
The key to the cupboard. The cane shining as it catches the sunlight. Susan’s eyes following its every movement, one hand sneaking round to her bottom, teeth nipping anxiously at her lips.
‘Get across that stool!’
Lift her skirt up. Navy knickers cuddled close around the fullness of her bottom, bare thighs glowing with sun tan in the sunlight.
Take her pants down? Or what?
Yes, better take them down. Might think she’d hit on a sore point with her graffiti otherwise. Yes indeed — take them down, and confidently.
‘S-sir — I’m sorry sir —’
‘You will be.’
Bared young bum-cheeks huddling together, knees bent, thighs pressed close, hands clasping the legs of the stool.
The cane, gleaming malevolently, patting arrogantly across the two satiny buttocks, knickers tucked halfway down her thighs.
Whack!
‘Ooh — n-no — please sir —!’
‘Quiet! You’ll learn respect one way or the other Susan, and if it has to be this way then it’s your own fault!’
Double line of the cane-mark plain across the tender flesh, the cane nuzzling close up under the plumpest part of Susan’s cheeks ready for the next stroke.
Thwack!!
A gasp, a quiet, mewing sound, an involuntary twitch of the buttocks.
Whack!!
‘Ooooh —’
Swhitt!!
‘Oh Lord — p-please —!’
{A real stinger that one!}
Swhatt!!
‘Oooh — hooo — oohoo —!’
Thwack!!
Struggling legs stretching the navy knickers taut between them, hot-looking bottom wriggling agitatedly, panting sobs blubbering plaintively.
Leave her there, head down, bum decorated with six neat double stripes. Make the entries in the big book, the girl’s dismal weeping a musical background.
A tentative knock at the door. Susan starting up, peering anxiously over her shoulder.
‘Stay where you are Susan!’
So now what? A little, nervous knock, wasn’t it? So — must be one of the girls. Well then, why not —?
‘Come in!’
‘Oo–ooh–’ A despairing wail from Susan.
A wide-eyed girl standing in confusion by the open door.
‘Well?’
‘S-sir —’ eyes wandering to Susan’s caned bottom, ‘— M-Miss Sands said to give you this note sir.’
The note, crinkling as he unfolds it.
‘Dear Headmaster, since my two free periods this week will fall on a Thursday —'
Nothing interesting. Pity — it might have been a ‘request for punishment’ note, and the girl is rather sweet. But never mind.
‘Thank you. There’s no reply.’
‘Thank you sir.’ Anxious last look at Susan’s bare bottom atop the stool, a fearful glance back at him, the door closing hurriedly.
‘Get up, Susan.’
‘Yes sir —’
‘No, I didn’t say you could pull ‘em up. Get up on the stool girl.’
Bare thighs catching the sun, lowered knickers inhibiting the task of clambering up to stand on the stool, the whole evolution distinctly wobbly in execution. Hands coyly hiding the apex of her legs.
‘And you’ll stay up there until I come back from break, is that clear?’
‘Y-yes sir.’ Flushed face very rueful in expression.
‘And hold your skirt well up.’
‘Yes sir.’ 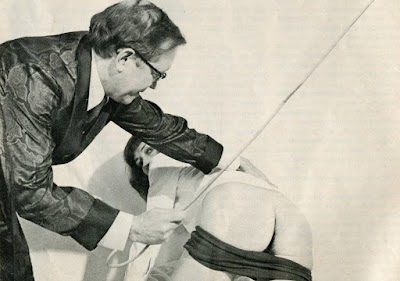