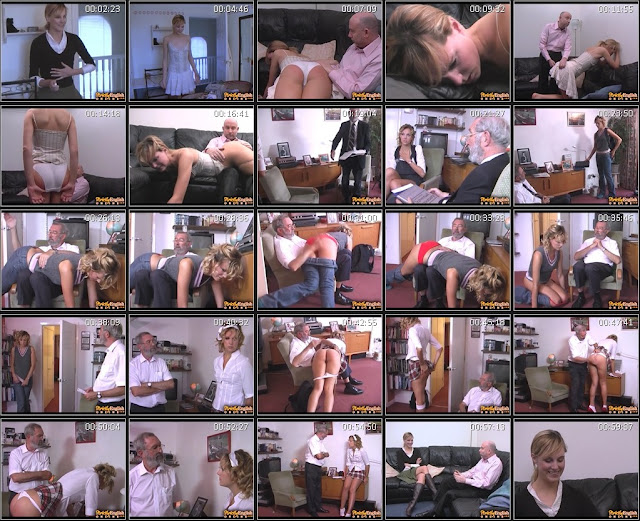 Review from spankingfilmreview.com (continued):
‘Amelia Jane and the Tutor’ begins here, a continuing saga of student Amelia’s encounter with smarmy professor Templeton, who has plans for her.
Amelia bops into his office for the first time, spunky and cute as ever, all 6′ 1″ of her, in a plaid pinafore with a bib top, short curly hair here. A schoolgirl just asking for trouble.
The professor explains that he believes in “traditional” forms of discipline. Amelia may receive corporal punishment — “your bottom smacked or a dose of the cane.” Amelia absorbs this news face full-screen, and tops the line with a surprising retort. “Thank heaven, I thought you fucked the students.” The professor is shocked, Amelia tries to take it back, but she knows she’s now in for a time of it. They set a time for her first tutoring session, and whatever else.
Fade to the next day: she arrives for her session, but first he will punish her for that aspersion on his character she made, a spanking. “Now?” She storms out the door, but after an interval soon knocks and creeps back in, having acquiesced. Templeton takes her OTK and tells her she is not to wear jeans in the future. (From where we sit, she can wear them any time.)
She adjusts herself OTK, pretending not to be certain how it is done, an acting detail, maybe not of the Academy level, that she inserts in some form in many films. Templeton’s chair is so low and there is so much Amelia that she spills off his lap. She drops her jeans to display red/orange panties, which Templeton dispatches in short order. Amelia tries to cover between her legs. He spanks and caresses.
“Stand up.” She desperately covers her front. Why should she, he spanks girls here regularly. “Good. We can start some work.” Another appointment is made.
Dissolve to the next appointment: Amelia, resplendent again in white blouse and plaid skirt, is late. He starts her off with a brief spanking on her white panties for tardiness. She wants to know if spanking will be a part of every session. Apparently yes. It surely will affect her panty selection. (We know she’ll dress accordingly.)
She reads her essay and earns another bend-over. “Time you learned about implements.” Depicted in the next part, “English Girl, English Cane.”