Another classic video from Roué 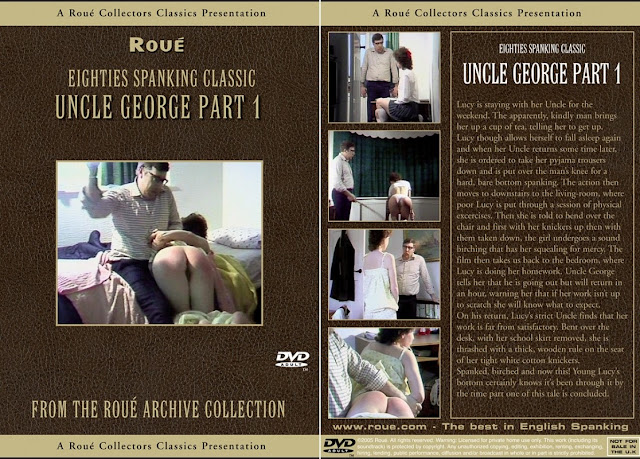 Lucy is staying with her Uncle for the weekend. The, apparently, kindly man brings her up a cup of tea, telling her to get up. Lucy, though, allows herself to fall asleep again and, when her Uncle returns some time later, she is ordered to take her pyjamas trousers down and is put over the man’s knee for a hard, bare bottom spanking. The action then moves to downstairs and the living-room, where poor Lucy is put through a session of physical exercises. Then she is told to bend over the chair and, first with her knickers up then with them taken down, the girl undergoes a sound birching that has her squealing for mercy. The film then takes us back to the bedroom, where Lucy is doing her homework. Uncle George tells her that he is going out but will return in an hour, warning her that if her work isn’t up to scratch she will know what to expect. On his return, Lucy’s strict Uncle finds that her work is far from satisfactory. Bent over the desk, with her school skirt removed, she is thrashed with a thick, wooden ruler on the seat of her tight, white cotton knickers.
Spanked, birched and now this! Young Lucy’s bottom certainly knows it’s been through it by the time part one of this tale is concluded.
Review from spankingfilmreview.com:

M/f; year: 1985; Time: 32 minutes
Another classic from Roué, just as naughty as it can be, where age play ‘uncles’ prey on vulnerable girls. We thought this story might end up with action on a brass bed like Big Girls Do Cry, with its similar plot. Curly-haired brunette Lorelei is within the grasp of her ‘Uncle’ George and under full-scale torment for poor academics. The scene opens with Lorelei lolling in bed and soon dragged out by her Uncle George. Soon he has her doing star-jumps, wearing just her nighty-night print knickers and an undershirt, cut-off very high so that her breasts are mostly exposed. Not too many uncles would subscribe to this regime, but we applaud George.
George has a bundle of birches to slash at whatever skin he can reach. Lorelei is moved around the room, helpless and submissive. She kneels on and bends over the back of a straight chair, filling out her tight pants, for the birch. The cuts are moderate but stingy, and she struggles to remain still. Over the back of the chair for more, then jogging laps around the chair, knees high, boobs bouncing. George swipes her bottom on each pass. Wicked little CP action.
Next, Lorelei does the ‘bicycle’ in the diaper position on the chair seat, panties still surviving, while George slashes the wriggling buttocks. In theatrical lighting, Lorelei slowly rolls her knickers down to her knees and the camera holds and contemplates. Over the chair back, bare bottom, for more birch. As nice a depiction as you can imagine, a cover-art moment for the video manufacturers.
This part of Lorelei’s indoctrination complete, George sends her to bathe — frontal glimpses as she shuffles out of the room with her pants at her knees.
Later in time, Lorelei is seen at her study desk in school uniform, Uncle George berating her.  Soon he is spanking her with a ruler on her white knickers, over the desk. Typical Roué shots from the era, through doors, from the hall, up and down the stairs, enhance the illicit voyeur feel to our presence as witness.
Continued next week in Part 2…
Part 1:
Part 2:
Part 3:
Posted by Fleas63 at 06:00