This is the final part of the Cheek-to-Cheek Dance School trilogy. 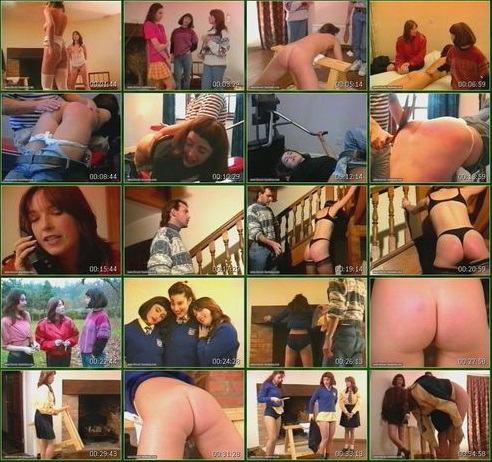 First review from spankingfilmreview.com:
MF/3f; time: 54 minutes
Another charming girlie show form Cheek-to-Cheek/Metro, with Nicky van Kriel, Amanda Patterson, and Joanna Walker, the three glamorous dancers who will create the ‘triple trouble.’ The plot which leads to the individual spanking segments is confusing, but the storyline is irrelevant, given the eye candy. The girls seem to work for a men’s club, where girls can be spanked.
The girls practice-dance in a Victorian-looking house in their undies or less. Joanna and Nicky require Amanda to strip naked and they paddle her over a trestle for some infractions. Mild but sexy, and very revealing. Nice nude bottom lotion scene on the bed.
Joanna is sent to meet “a new client who wants to spank you.” A mild OTK scene, except for the diversions of  lengthy  views of her beautiful face and close-ups of a small, hard, muscular dancer’s bottom. The customer spanking gets a bit more serious. She willingly assumes the diaper position, locking her elevated legs and arms in a piece of exercise equipment for support – very athletic – for more hand spanking and an absolutely huge tawse, which could only be used gently  this early in the film if Joanna has more spanking scenes.
Another separate segment: it seems Joanna has forgotten costumes she is responsible for. She is confronted by the male club owner Milton in the baronial foyer of the house. She takes off the costume she is wearing and is spanked in her bra and thong, while she holds onto the spokes of the stairway banister, her beautiful figure set against the elegant architecture.
The girls jog on the grounds, in outfits which would stop traffic. Nicky tells her two friends the club is looking for girls “To do a dance routine and then be thrashed.” The money is good. Deal.
We then see this club act – the action is confusing. Nicky spanks the girls for unseen spectators – the girls wear school uniforms. In turn, they take off their school skirts, bend and spread over the trestle in a style special to CTC. Nicky pulls their knickers down for the paddle and tawse. The girls also make-a-bridge for the tawse – they are very athletic in this move as they are throughout. Knickers keep going up and down from scene to scene.
The tables turn on Nicky. Milton is going to give her the cane. “No way… this is not in the show!” She bends for the cane, but Milton somehow misses on the backswing, the group dissolves in gales of laughter and the caning scene fizzles into a sort of out-take.
There follow four spanking sequences which have no bearing on the preceding plot, such as it was. The segments appear to be archival material, in keeping with CTC style of moderate spankings to very fancy bottoms of beautiful girls, no frontal nudity.
Blond Jenny is spanked OTK by a faceless male, and not happy about having to take her pants off. An excellent oblique of her bare bottom, an angle under-utilized which emphasized the high swell of the female tush, especially in her case.
Blond Jenny again as a schoolgirl, touch-toes, white knickers down, for sonorous cracks with the official tattered shoe ‘slipper’  CTC uses.
Jenny and brunette schoolgirl friend gossip and whisper about the merits of a good spanking, followed by the last scene, where the brunette finds her curiosity satisfied with a mild caning and then a lecture and a long bare-bottom spanking for poor schoolwork. She too possesses the charming Cheek-to-Cheek equipment.
Second review from spankingfilmreview.com:
2MF/3f;  time: 50 minutes
Pretty and tight dancers’ bare bottoms, not much plot. Mild spankings of pretty girls at a dancing school manage to preserve the ladies for future films. No way to stitch together a plot description. We’ll describe the scenes, and we admit we craved a bit more zing to the punishments.
Two girls paddle a third over the company trestle, the device found in most Cheek-to-Cheek/Metro films. Attractive but silly, cold cream at the conclusion.
A  faceless male disciplinarian, whose voice is familiar from other CTC films, has spanked many bottoms, including that of ‘Vida Garman,’  has one of the dancers OTK and then in the wonderfully naughty diaper position for some tawse.
The lovely ‘Joanne’ has lost some costumes of the dance company and must strip for punishment. The setting is the entry hall of a McMansion. She makes a nice picture, a modest little thong remaining in place.
Two of the actresses now appear as schoolgirls and are paddled and tawsed in the traditional British mantelpiece pose, by the male ‘Nielson,’  then spread wide over the trestle. Mild spanking but great photography.
The Head Girl gets 18 with the tawse; there is laughter on-set – think she farted.
A saucy blonde is in the OTK clutches of our mystery spanker. Down with the thong. “Oh, sir, anything but this.” Nice red bottom and the best close-ups of the film.
A cute schoolgirl must strip and gets the slipper, mild but attractive. And a last schoolgirl OTK scene.
Part 1:
Part 2:
As referenced in the reviews there is some additional footage at the end of the video that appears to me to be unrelated and probably not from Cheek-to-Cheek at all, featuring the lovely Mel Penny. I will post next week.
Posted by Fleas63 at 06:00