From Roué 40
Every week upon the publication of the local paper Mrs Chandler would turn immediately to the classified ads section and, in particular, to the part headed SERVICES. For two months she had scanned these columns in the hope that she would find a suitably qualified tutor for her daughter Debbie. Over this period she had replied to numerous advertisers only to learn that such people were few and far between. There had, however, been a couple who appeared to ‘come up to scratch’, but as these were men — and, since the circumstances which brought about her divorce, she didn’t trust the male species an inch — she declined their services. 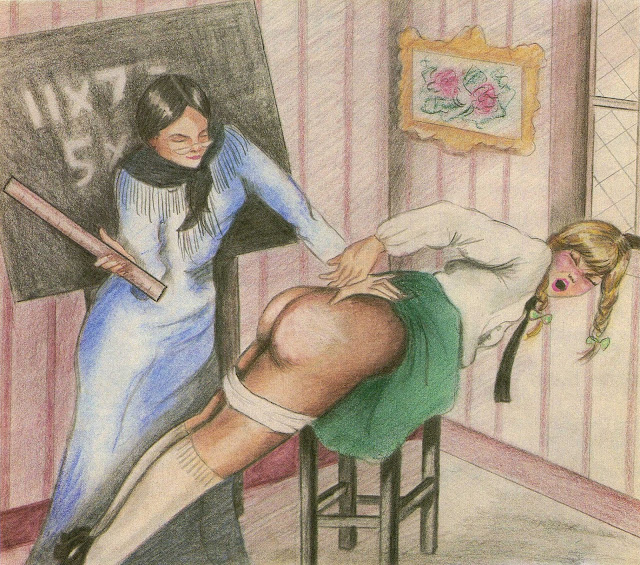 By the time the punishment was over, Debbie had received a dozen well-spread out strokes. She was bawling like a kid and tears streamed down her cheeks — while the cheeks at the other end of her displayed the scarlet marks of her thrashing.
Back home that night her mother asked how the session had gone. Debbie replied that she had done very well; that she had at last perfected long division, and that Mrs Jenkins was most pleased with her.
Mrs Chandler sat herself down on the sofa and in a flash hauled her errant daughter over her knee. In a matter of seconds the girl’s skirt was raised. For the second time that evening she felt her knickers being peeled down over her bottom. Her mother, upon seeing the redness of the girl’s bottom, snapped the knickers back into place. Expecting her skirt to be replaced also, Debbie attempted to rise from her mother’s lap. A strong hand kept her in place, and the next thing she felt was a parental palm on the seat of her school pants.
‘But, mum…’ she objected as her mother got into a rhythm and smack followed smarting smack, ‘W-what are you d-doing?’
‘I dislike lies,’ she was told. SMACK! ‘Miss Jenkins telephoned me…’ SMACK! ‘She told me about this evening…’ SMACK! ‘It’s a good job she did…’ SMACK! ‘Because you would never have let me know…’ SMACK! ‘Would you?’ SMACK! ‘Eh?’ SMACK! SMACK! SMACK!
Posted by Fleas63 at 06:00