Story from Kane 81 by Stan Moore

Mr Grimshaw is our Financial Director, a small, irascible man with a sharp business-like manner that makes him very hard to work for, or to be friendly with. His sense of humour would make an alligator seem pleasant. His main concern in life is money.
Miss Maria Angelina Carnallo is Mr Grimshaw’s secretary and assistant. She is icily efficient and hastily remote; also very hard to get to know. Unfortunately, she has a bird of-the-month build, and a smooth way of moving that makes her very attractive. She also has thick, dark wavy hair and large brown eyes below very expensive black eyebrows, with a cute straight nose. Though she rarely smiles, trying to match Mr Grimshaw’s seriousness, she has perfect teeth and a full sensuous mouth that gives me a lot of trouble when I think about it. Her long slim legs and firm, full breasts are no help either. She makes very exciting thinking.
Miss Carnallo could arouse a bishop. She arouses me without even trying, but she is the most unapproachable young lady I have ever met. This is intentional, on her part, at work; and no one in the office has ever met her socially. She is the sort of girl men like to daydream about in their weak moments, for mental spanking.
The robbery changed all that for me and her!
Miss Carnallo was working late and was alone in the office when the robbery happened. In fact she let the thieves in! They knocked on the outer door, which is always locked after hours, and she, not thinking of a robbery, went and unlocked it and got the shock of her life. She had no chance then — not even to scream! The thieves must have been as efficient as Miss Carnallo herself. I hadn’t been away more than half an hour and it was all over — the robbery that is. For Miss Carnallo the evening was just starting.
That evening I forgot some important paperwork I had intended to take home to work on. This was wanted urgently the following day, so I swore, and went back for it. The lights were still on in the office. Though the door to Mr Grimshaw’s office was open I didn’t see her until I’d found my paperwork and was on my way out. I noticed the low light in there and glanced in and got a big surprise.
I’d been very quiet, hoping to get into the office, find my work, and get out again without Miss Carnallo hearing me and no doubt letting old Grimshaw know I’d forgotten to take the work when I’d left. To him this would have been a dire dereliction of my duty to the firm, as there was a fair sum of money involved, hence the urgency.
I noticed the faint, regular creaking sound as I quickly went through the work on my desk almost silently. Also, there was the sound of very soft nasal breathing, or something. I didn’t pay very much attention to either. Until I found what I was looking for I was all business. The thought struck me as I quickly and quietly checked that all the paperwork I needed was there. Perhaps old Grimshaw had asked Miss Carnallo to move something in his office? She sounded as if she was trying to move something fairly heavy in there. Rearranging his furniture perhaps? Or maybe he’d had some new equipment delivered? Either way I had a possible chance to offer my help, and perhaps find some reason to chat with her afterwards. I’d give her a hand anyhow.
Not wanting to intrude if I was wrong — she may have been entertaining her current boyfriend in there — I padded slowly past Mr Grimshaw’s office door, glanced inside and there she was.
The sight of her stopped me dead! I pushed the door open wider slowly and stared in sheer amazement! All I could see of Miss Carnallo was mostly her long, slim legs, and her very trim bottom. She was leaning over the back of old Grimshaw’s heavy leather armchair — far over! Not the big swivel chair behind the desk, the deep, soft customers’ chair in front of it, with its high, curved back, and its many domed brass nails. I’d have known her cute bum anywhere. 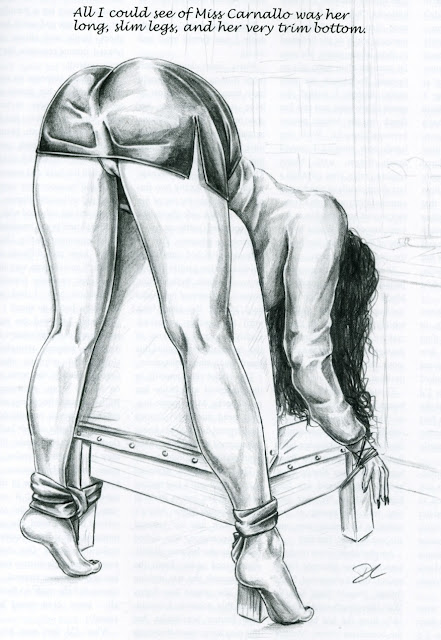 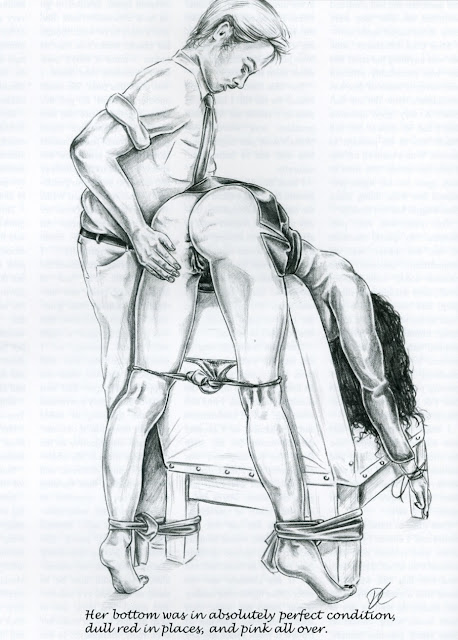