‘In the living-room with you at once, young lady,’ Jenny’s father had told her upon his return home. ‘And make sure that you’re ready. I’ll be with you presently. Now, be off with you, girl.’
Jenny had pleaded with her mother not to tell her dad of her truancy. Her words had fallen on deaf ears. ‘This isn’t going to be a simple spanking, my girl,’ she’d said, ‘you’ve had enough warnings. No, it’s high time your father dealt with you.’
And so Jenny had spent two practically unbearable hours in her bedroom awaiting the arrival of her father. He’d called her down on hearing of her latest misconduct, given her a brief lecture, and despatched her to the living-room.
Once in the room, Jenny quickly set about complying with her dad’s order to be ‘ready’. She thrust her hands up underneath her navy-blue gymslip, hooked her thumbs in the waistband of her tan-coloured tights, dragged them down, stepped out of them, and put them over the back of an armchair. Then, after a moment’s hesitation, she peeled down her knickers, putting them with her discarded nylon tights.
She moved over to the pouffe, pulled her gymslip up a little at the back, and bent over, her hands resting on the piece of furniture.
How often she’d been in this same position. Good hidings were something of a common occurrence in her home — although for the most part these comprised nothing worse than a mildish spanking over her mother’s lap. This particular position was for the more severe punishments — such as truancy, and took place approximately once a month. Every time her dad had given her a whacking she’d promised herself that never again would she incur the wrath of the redoubtable and very strict man. But here she was again, knickers off, bending over the pouffe, awaiting yet another fatherly thrashing.
The seconds were ticking by. Soon he would be there in the living-room with her, the cane in his hand. Was she ‘ready’? Had she done everything expected of her? She tugged the back of her gymslip up one more inch — surely enough of her bottom was showing. What about her legs? She spread them further apart.
The door opened, and there stood her father with that horrid, thin cane. How many would it be this time? Four? Six? Eight? The last time she had played truant she’d got six, with a warning that next time would be more severe. He went up in multiples of two, so it had to be eight. Didn’t it? She’d never had so many before. Could she take it? She was just about to find out… 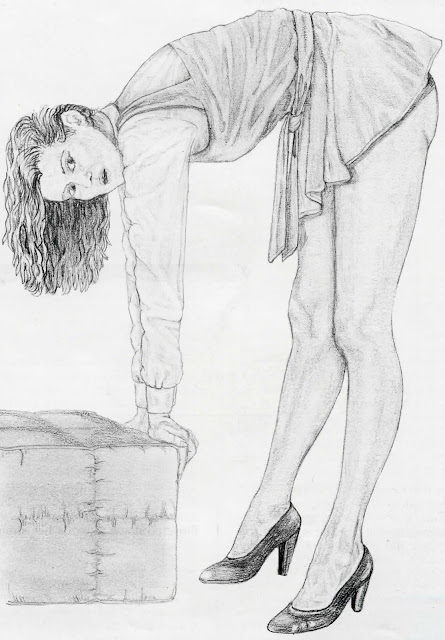