From Roué 39
Charles Penworthy, Headmaster, had for some time been on the look-out for a new broom. Geoffrey Watkins, appointed recently as Deputy Head and Geography teacher was that man. Like the Head, Mr Watkins was a staunch believer in strict discipline and all that it entails. ‘I couldn’t agree with you more, Headmaster,’ he had responded to the old boy’s observation that, ‘Youngsters today seem to think they can get away with murder.’ Watkins had spent the entire interview nodding at and agreeing with his prospective employer’s statements upon the lack of discipline and order and the need for a return to the age-old methods of corporal punishment. ‘This is an independent establishment, Watkins. Parents who send their girls here do so in the knowledge that CP will be employed when and if it is necessary. Yet I find that more and more of my staff are choosing to deal with disobedience and indiscipline in other, less efficient ways. Impositions, lines, detention — that sort of thing. Good God, they have the authority to chastise the little devils after all. I don’t know what it is. There seems to be a veritable epidemic of lily-liveredness amongst them. Why, only last week a sixth form girl, guilty of smoking, was given nothing more than an hour’s extra homework for her sins. I mean, where is it going to end?’

‘Well, Headmaster,’ Mr Watkins had replied, ‘you can rest assured that I shall not hesitate to deal most severely with such blatant rule-breaking… should you choose to offer me the position that is…’
Needless to say, Watkins was appointed Penworthy’s right-hand man without further delay, taking up his position the very next week. ‘Spare the rod, Headmaster,’ he had said on leaving the man’s study.
‘And you spoil the child, Watkins,’ the Head completed the saying, adding, ‘Admirable sentiments indeed. The rod, as you see, hangs behind my door. I trust that you will not refrain from sending for it whenever the opportunity presents itself.’
‘Indeed I shall not, Headmaster,’ had been the new broom’s closing words.
In fact that rod was called for on Watkins’ very first day. As a rugger referee he needed to stamp his authority on the game in its early stages, he had thought to himself, so I need to show these girls just who is boss right from the kick-off.
The first girl to incur his wrath was one Theresa Waddington, a pretty, plumpish, dark-haired minx who, in answer to the man’s question, ‘Where are the Andes?’, had replied, ‘On the end of your armees, sir,’ exacerbating the situation by giggling. Her laughter was contagious; the entire class before very long guffawing at their chum’s wit.
‘Silence!’ Watkins boomed, the din finally ceasing abruptly at his next statement. ‘Theresa is to be punished! Any girl who wants to join her can continue laughing at her infantile remark:’ The dropping of a pin could have been heard as the teacher ordered Theresa out to the front of the class. The girl hesitated. What, she wondered, had he meant by ‘punished’? Why should having to write lines or stay behind after school entail going to the front of the class?
Mr Watkins was growing impatient. ‘Out to the front this instant, girl!’ he raged.
Confused and more than a little anxious, the girl obeyed. She stood, very much the cynosure, facing the man. ‘Y-Yes, sir…?’
‘Lift your skirt up, girl,’ came the order. A murmur went around the class.
‘S-Sir?’
‘You heard me, young lady… Lift your skirt up!’ 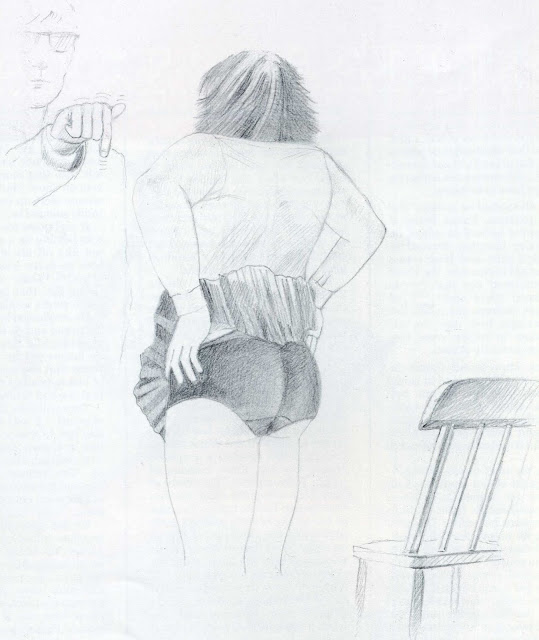 Theresa complied, her pals looking on in disbelief. With the garment around her waist, the next order came. ‘Now take your knickers off.’ The sharp intake of breath of twenty or so girls was heard. ‘Silence!’ he barked at the class, ‘unless you wish to present yourselves out here as well.’ Silence reigned. ‘You, girl… Yvonne, isn’t it? Yes, you. Run along to the Headmaster’s study and fetch the cane.’
The astonished classmate of Theresa did as she was bid, and within seconds had returned with the implement. She stood, dumbstruck, as she took in the sight before her. Theresa had divested herself of her navy-blues and was bent over a chair. Yvonne stood there, stupefied, holding the cane in her hands. 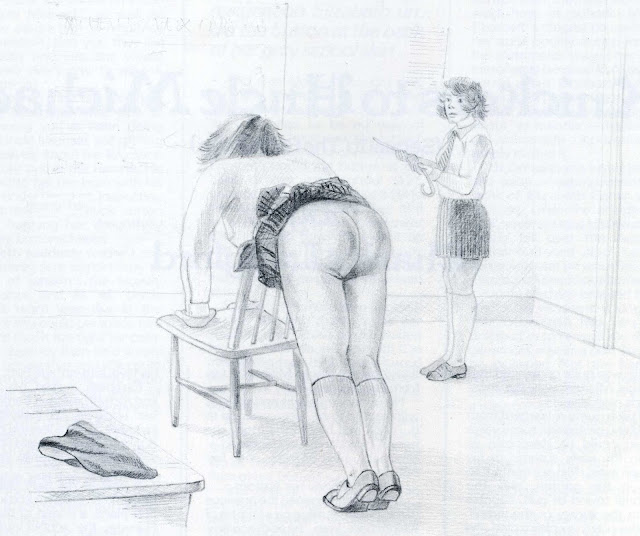 ‘Well, girl!’ Mr Watkins shouted at her, ‘give the thing to me.’ She did, then hurried back to the desk.
‘Right, young ladies,’ the teacher announced, turning to face the throng whose eyes were transfixed on the cane one second, and Theresa’s naked bottom the next, ‘this is what all of you can expect to receive from now on should you misbehave in any of my lessons… is that understood… well?’ In none-too-perfect unison, the reply, ‘Yes, sir,’ reached Watkins’ ears. ‘Good. Let us hope that you remember. Let us also hope that you learn from young Theresa’s punishment just how terrible such an ordeal is.’ Turning to face the mortified Theresa, he added with a wry smile, ‘And let us hope that what you are about to receive will make you truly penitent… and that there will be no repetition of what occurred today… hear, Theresa?’
‘Y-Yes… ssir’
Unknown to the unfortunate, soon-to-be-howling Theresa, the redoubtable, soon-to-be swishing Mr Watkins, and the twenty or so, soon-to-be-astounded girls, there was another pair of eyes taking in this scene. The eyes belonged to one Charles Percival Penworthy. A glow surged through him and a smile came to his face. He’d found his new broom, and no mistake!
Posted by Fleas63 at 06:00