The last of the three Jane features from Blushes 65 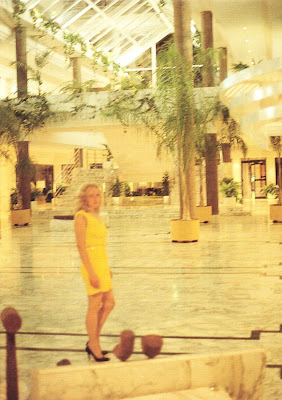 Bill poses Jane in various public parts of the hotel. Including the foyer, when the receptionist has left her post for a few minutes. And Bill insists on the shots he wants. Open-leg shots in other words. Full pussy shots. This is what the readers want and therefore it is what the readers must be given. It is a heart-stopping business, when at any moment someone could suddenly appear… While Jane is seated for instance in that bamboo chair in the foyer, or more accurately lying in, with her legs spread wide and the hem of her dress up round her waist. 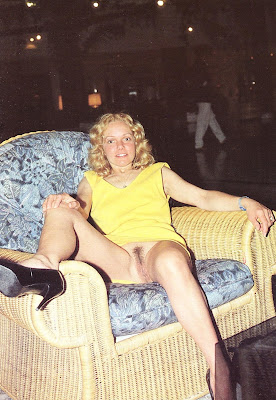 No one does appear when Jane is exposed like this, but it is enough to cause a girl to have kittens. And likewise when Jane is kneeling on a cane chair in the main lounge, again with her skirt up round her waist. 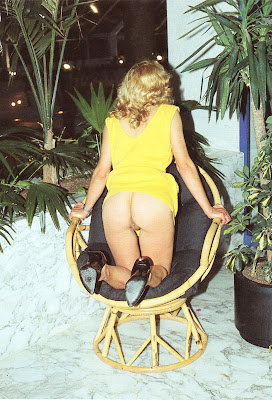 Other shots: Leaning over the balcony. Leaning over the billiards table in the sports room. Where in fact a youth does come in here while Bill is getting a couple of shots of Jane over the table — and surely he must have seen? Jane leaning right over and balancing on one leg, her other leg up. Her skirt right up. Her bottom quite bare… and everything between her legs bare and on show. 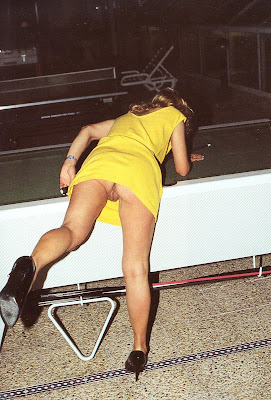 Jane almost falls off, in a panic, when she realises someone is there. As Bill quickly moves in front of her. But… flush-faced and standing now, with her skirt back down, Jane can see in the youth’s face that he has seen.
‘No, I don’t think so,’ Bill says. But he is not being very honest. What he really thinks is that yes, pretty certainly that young chap did see Jane’s bare cunt. But anyway, not to worry.
It is not a problem, is it? And they are going out now. In the little hired convertible. Bill has got in some excellent shots and has earned a spot of relaxation. In fact they both have. 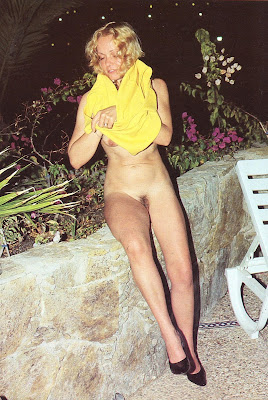 ----//----
But of course the day’s work is not yet over and Bill will want more shots, at any attractive location they come upon on their drive. He tells Jane to bring another dress, to give a bit of variety. Also her bikini, for swimming and sunbathing which he can also shoot for the mag. For his part, Bill says, he is going to take along that cane. For any touching up of Jane’s bottom which may be necessary. 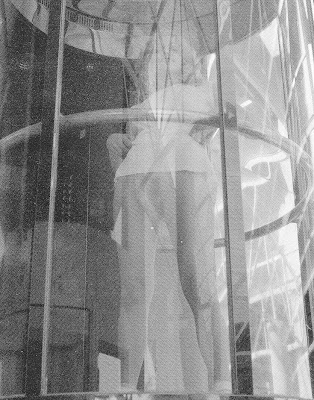 As Jane squawks a protest (No. Not that cane again!) Bill’s mind is running on. They could in fact shoot some more shots for that story. They haven’t got Mike today but there are other possibilities. There are usually plenty of locals, boys and young men, hanging around the hotels and along the front, trying to offer their services as guides or for any other odd jobs. In fact as Bill and Jane now walk out of the hotel two of these boys, aged about 17, immediately importune them.
Bill waves them away. But his thought is: why not hire one for a bit of extra action with Jane? Any one of them would naturally jump at the chance. Some caning action perhaps, which could be incorporated in the story.
Sitting in the little convertible Bill tells Jane his idea. Her reaction is perhaps predictable. ‘No! No Bill! No way!!’ 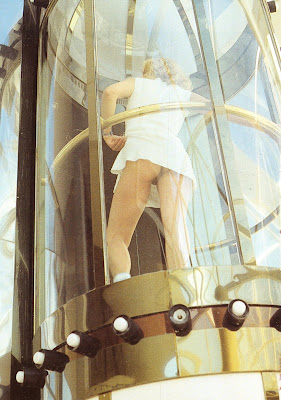 ‘Why not? It’d just be poses for the story. We could pick a nice good-looking one. I would have thought you’d much rather have that. If you say you don’t go for Mike. We could even have him screwing you in some of the shots.’
Is Bill serious? He can’t be. Being caned… and screwed… by one of these young peasants. Jane is going slightly berserk at the thought. Bill tells her to calm down, he’s trying to drive the car. ‘But why not…?’ he asked innocently.
----//----
They have found a nice deserted sandy beach and Bill has parked the car. Jane has changed into the little white dress, and replaced her black heels with white ankle socks and her trainers. Bill is going to take some more shots first, before they have their picnic on the beach. Shots of Jane by the car. Bending over the boot, etc. 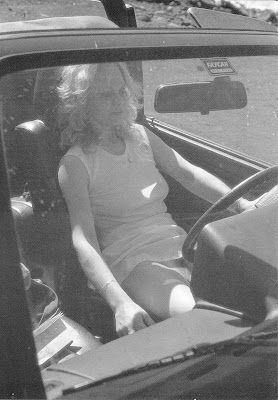 She still has no underwear on. No knickers in particular, and Bill gets some more nice flasher shots. Pussy shots. 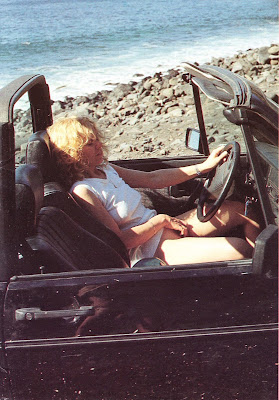 Jane is not particularly concerned about posing for pussy shots, not right now. If Bill wants more pussy shots he can have them. What she is concerned about is his threat to hire one of those boys to be with her. Bill can’t see why it’s a problem to her. Or says he can’t. Jane is not really sure why the thought is a problem. She has done it with Mike — and probably will have to again. But somehow the thought of one of these foreign youths, simply hired for the purpose, is too much. Yes, definitely worse than Mike. Because also Mike may be horrible at least he is not a complete stranger.
They go down on the beach with the picnic things. Bill spreads out a blanket and sits down. He takes out a bottle of red wine, opens it and fills two glasses. He gives one to Jane and raises his own:
‘To our new BLUSHES star. Who is going to have all the readers going wild and clamouring for more, more.’ 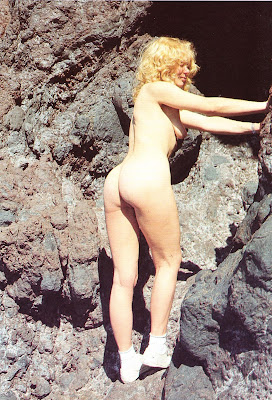 Jane takes a tiny sip. She doesn’t feel like drinking; or eating anything. Not right now. Not while Bill is still talking about getting one of those boys.
Bill. Look… you don’t mean it.’
Bill does actually. He can visualise in his head some really great shots. Jane and perhaps quite a young boy, 16 or 17 say, a nice handsome one. Both of them quite nude — or perhaps Jane could have just those white socks on — and really going at it. This handsome kid really fucking the daylights out of her. All the different positions. Doing the whole lot. 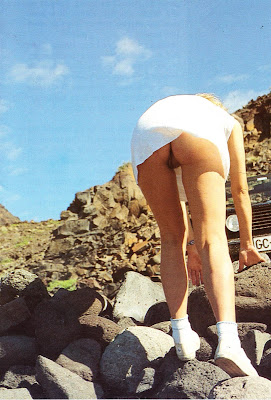 Yes, now Bill has thought of it he really does mean it, the idea is a great turn-on in fact. But Jane does seem dead against the idea, for some reason. So he is going to have to lead up to it. Probably she’ll be a lot more receptive when she’s got half a bottle or so of this excellent wine inside her.
Putting down his glass Bill lies back on the blanket. Smiling up at Jane. ‘We’ll see, shall we? Let’s relax and enjoy this marvellous spot. And perhaps pretty Jane is feeling… what shall we say: nice and companionable?’ 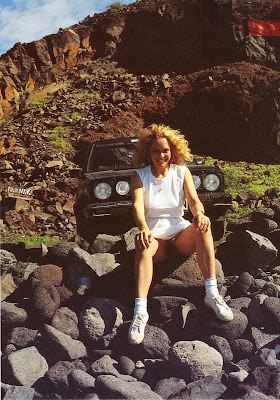 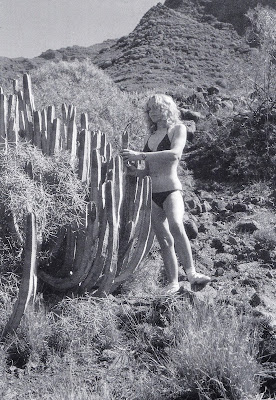 And Jane as we have noted is in an obliging frame of mind. Anything. Anything? Well this at least. Yes. Jane is very soon performing with an excellent show of cooperation. Indeed enthusiasm. Though whether it will affect Bill’s intentions remains to be seen. 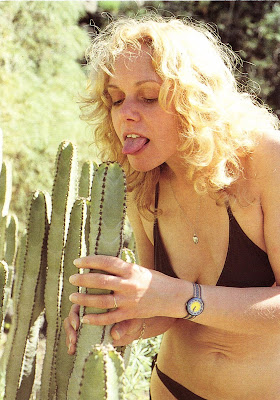