The second of two Jane stories from Blushes 66

Breakfast again Their fourth morning. Or is it? Your mind can lose track. That is what Jane thinks. And what are they going to be doing today? She is in her yellow dress again, looking fresh and crisp.
‘I read your letter,’ Bill says. ‘Pretty good. A few spelling mistakes but they can take those out in the office. Or maybe they could leave them in, it might look cute? Sweet Jane with her super tits and bum who can’t spell.’
‘Cut it out,’ Jane says. ‘I can’t help it if I can’t spell every word in the language. No! Tell them to correct it. I don’t want to seem dumb.’
Of course it’s a very edited account. I mean you mention spanking and caning, but nothing else. Nothing about that boy at the cafe for instance. You were really hot stuff with him, Janey dear.’
‘Don’t!’ she yelps. Jane doesn’t want to be reminded. It is almost like a dream, an awful dream. With that boy on the bed. Sucking his cock. And then screwing him. Half-drunk with the wine and only half aware of what she was doing. But in her half-fuddled state really turned on. Really loving it. Going wild. And aware, but as in a dream, that Bill is there watching.
‘No!’ she squeals again. ‘Don’t mention that. You got me drunk. I didn’t know what I was doing.’
Bill laughs softly, remembering the scene. Jane in frantic action. ‘You were really switched on. Really going. I got one or two great shots.’
‘No Bill! Let me have that film! I’ll burn it! You can’t put that in the magazine.’
Bill laughs again. ‘What’s it worth, pretty Janey?’
----//---- 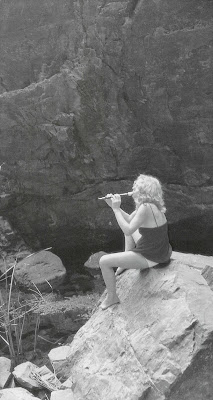 What it is worth is Jane being nice and cooperative. Up in Bill’s room. Saying she’ll do anything. Somehow, in the state she was in, Jane hadn’t realised Bill had his camera in that room at the cafe. Christ! So yes, she’ll agree to just about anything. Just about.
‘A smacked bottom first,’ Bill says. ‘A girl who hasn’t learnt to spell at school needs to have her bottom smacked. Really hard.’
Jane groans. But she isn’t going to argue. Bill sits on the bed and she allows herself to be pulled face-down over his lap. The yellow dress is yanked up round her waist and her little white knicks are pulled down.
‘You shouldn’t have worn any,’ Bill tell her. ‘To save the bother of taking them down.’
‘Aaaaooouuuwww!!’ 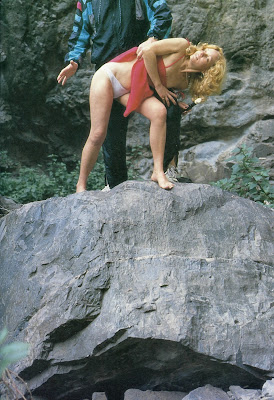 Bill’s hand has cracked in. Perhaps not as hard as Mike has done but nonetheless a real stinger. Followed by another. ‘No Bill! No!’
But Bill has a firm grip on Jane’s writhing form while his right hand continues to crack in.
‘No? What then? A taste of the cane instead?’
But Jane doesn’t get a taste of the cane. Because she agrees to a taste of something else. Kneeling in front of Bill as he sits spread-legged on the edge of the bed. With her bottom glowing from the spanking but at least it is not going to be that cane on top of it. Jane would do almost anything to avoid another taste of the cane. Certainly she will do this. A big mouthful. Of Bill.
‘Lovely…’ he murmurs.
----//---- 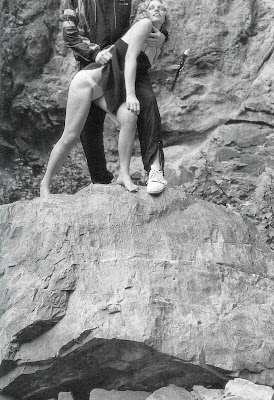 Afterwards they go down to the pool. Bill tells Jane she has earned a little relaxation, for being such a good girl. They are going to take the rest of the morning off. And then this afternoon: he has a special treat for Jane.
Jane, stretched out on her front on her beach towel, groans. ‘I don’t trust you any more. It’ll be something dreadful. It’s bound to be.’
‘How can you say that?’ Bill asks. ‘When I’ve been so nice to you. Promising not to use those shots of you with the boy. Maybe I should use them.’
She gives a little squeal of fright. ‘OK. Tell me.’
‘You won’t believe it. But this afternoon we’ve got Mike’s twin brother. To do a shoot. They’re almost identical. You can hardly tell them apart. He’s called Pascal.’
----//---- 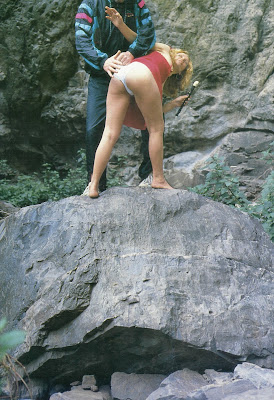 Is it a joke? Jane can’t believe it’s not Mike. He’s wearing different clothes but he’s exactly the same. Or seems to be. But they both insist he’s this Pascal, not Mike. His voice is a bit different, harsher. But it could simply be Mike putting it on.
They go out in the country and Bill takes some shots of Jane playing a pipe. In a skimpy little red dress and then in just a pair of little white knickers. Dancing and playing the pipe, she looks just like the girl in that film, Bill says. ‘That French film: Manon Des Sources, is it? Nature girl.’
Jane is still wondering about Mike/Pascal. And also what Bill will want to shoot with him. It will he something painful no doubt. Or at least unpleasant. Bill is not going to want her to screw him, is he? She really doesn’t want to have to screw him, whether he’s really Mike or not. Christ. She’s already done it with Bill this morning. This trip is becoming nothing else except screwing. And sucking. And being spanked and caned of course.
Jane thinks of Ian and immediately tries to push him out of her mind. Ian would go… bonkers if he knew. Oh Christ. She feels a bit tearful. They had some wine at lunchtime and that makes you get emotional. Well look at yesterday. Christ. Though she didn’t have as much as yesterday. She won’t be like that again. 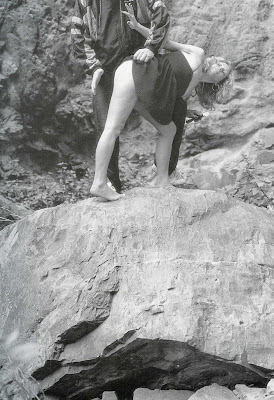 Bill says Jane can stop dancing and pretending to play the pipe. He’s got some really good shots. Now he wants action with Pascal. Pascal will be the Mike character in the story. No one will know the difference. Bill wants more shots of the Mike character giving Jane a hard time. Spanking her bare bum for a start.
‘Haven’t we got enough of those shots, Bill. Please,’ Jane moans.
Bill asks if she would rather shoot some brothel shots. They could hire a room somewhere and he could get a whole lot of these local boys. To fuck Jane on the bed, one after the other. Would she rather shoot that sort of thing?
Jane shakes her head. She does feel like crying. Bill puts his arm round her. ‘Well then, let’s get on with some nice shots with Pascal. Nothing much. Nothing to get excited about.’
The shots are similar to ones they’ve done before. With Mike. Though Jane half believes this is Mike anyway. Similar shots but not identical. Every shot is different. Every click of the shutter shows a slightly different angle of the delectable girl-flesh. The ripe jut of Jane’s bare bottom. The intimate glimpse of her pouting pussy. Yes every angle, every pose is different and they’re all great shots. Those connoisseurs of girls’ bodies who are keen BLUSHES readers will love all these shots. 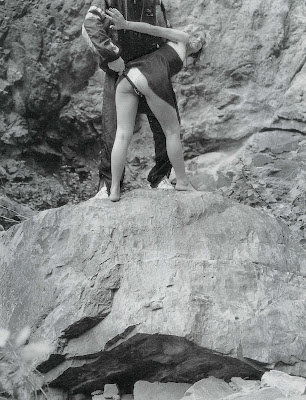 And after the spanking Pascal/Mike does want something else. The spanking no doubt arousing him. Jane, over his lap, has been aware that’s he’s got a big erection. And for starters he now wants Jane to suck it.
‘No!’ she squeals. ‘No Bill. You… You can’t use shots of that anyway…’
‘Don’t worry,’ Bill tells her. ‘I could always sell them to another mag. In the States for instance. They really go for suck shots over there. So don’t worry about that, Janey.’
It is Mike or his twin brother? Does it make any odds? When they want the same thing. And Jane has to oblige. With Bill there. Bill with his camera.
----//---- 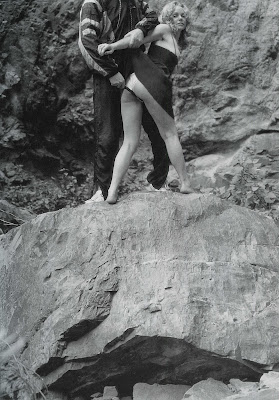 In bed. With Bill. Jane’s big double bed that she has had all to herself those other nights. But tonight there is Bill here with her. Because he’s got those shots of her. With that awful boy yesterday and now with Mike. Jane was sure it really was Mike, it was just their silly joke to pretend it was his brother. But anyway Bill has those shots and Jane can’t afford not to be nice and cooperative. Which means… letting him come to bed with her. Just tonight he said.
Jane is on her back and Bill is stroking her pussy. She doesn’t want him to do it of course. But it does feel good. You can’t help it feeling good. His fingers there, where now she is all wet. No you can’t help it feeling good… so you might as well relax and enjoy it. If there’s nothing you can do about it. When he’s finished that of course, when he thinks he’s got her worked up… he’s going to want to screw her.
Well that will probably feel good too, if you relax and let it. And what else can you do? 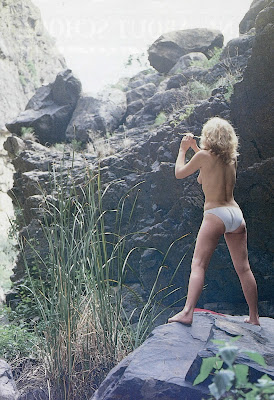