Spankers Gallery - Master of the Hounds

It was that day again. The Day of the Hunt. Every other Sunday the more well-to-do inhabitants of Little Chitterworth met for a stirrup cup prior to riding off in hot pursuit of the cunning and elusive fox. It was a day much hated by two particular young ladies of the charming little village — Kathleen and Bernadette Flynn, the maidservants of Master of the Hounds, Sir Rodney D’Arcy.
The Flynn sisters had been in Sir Rodney’s employ since their mid-teens when he had lived in their native Ireland. When he announced that he was retiring and returning to his roots in the Shropshire countryside, the girls accepted his invitation to join him. The girls’ mother, Sir Rodney’s cook on the other side of the water, had been handsomely pensioned-off, and saw her daughters’ opportunity as something they would be foolish to pass up.
That was all some years back — Kathleen now being 25, and Bernadette 21. Working for the old boy was, for the most part, a doddle; their chores were light, the accommodation nothing short of luxurious, and the remuneration generous. The one and only drawback to this otherwise perfect arrangement was Sir Rodney’s curious predisposition for the odd spot of ‘bottom warming’ — as he put it.
Of course. this habit of his was in evidence back at his Manor in County Sligo — the girls’ coming in for the occasional session over the master’s knee, and it was because of this that young Kathleen and Bernadette had doubted the wisdom of leaving their mother and going off to a strange land with the man. Their mother had told them that such doubts were ‘silly’; that they deserved the occasional spanking to keep them in line. ‘Sure, and what’s the big deal about a few slaps to your fat behinds, anyway?’ she’d said. What neither the widow Flynn nor her daughters had taken into account was that when they grew into young women, far from being excused such child-like treatment, their punishments would actually develop into far more severe chastisement than the mildish — sometimes almost playful — bottom smackings of their days back home.
But the girls had decided to accept these thrashings; they were, after all, everyday occurrences, and the easy, well-paid work more than compensated for a sore bottom every now and then.
For trifling misdemeanours, Sir Rodney still meted out the odd over-the-knee spanking — these the girls didn’t mind too much. It was the day of the Hunt. the twice-monthly Little Chitterworth Fox Hunt, that was reserved for the more severe hidings — and how the sisters despised these days.
You see, since returning to his family home the Master of the Hounds had yet to find any success with regard to catching the sly quarry, and each successive failure served to put the man in most awful mood when he returned, cold, out of breath, and defeated.
‘Pull these damn boots off, Kathleen!’ he stormed at the elder of the two sisters, ‘and you,’ he growled at Bernadette, ‘tidy this place up… there’s dust everywhere!’ The girls required no second bidding — nor did they need to be told that, yet again, the fox had eluded the Hunt.
Kathleen and Bernadette set about their chores without delay. Animal lovers both, they awaited their employer’s return with mixed feelings. They hoped that the poor little fox would get away, but knew that this would only result in them having to cope with an irate Sir Rodney who would find fault in their every deed and, inevitably, exact retribution on their behinds.
Kathleen was busying herself with the polishing of the master’s boots, while her younger sister flicked her feather-duster around the mantelpiece. Sir Rodney cast a sideways glance at Bernadette, her black silk dress every now and then inching tantalisingly up to reveal a bit of bare thigh above her stocking-tops. He picked up his riding-crop and extending his right arm, pushed the garment up at the back, bringing into view the girl’s black silk knickers with their white lace edging. Not only were the girl’s brief knickers on show, but a good portion of bare buttocks met his approving eyes. 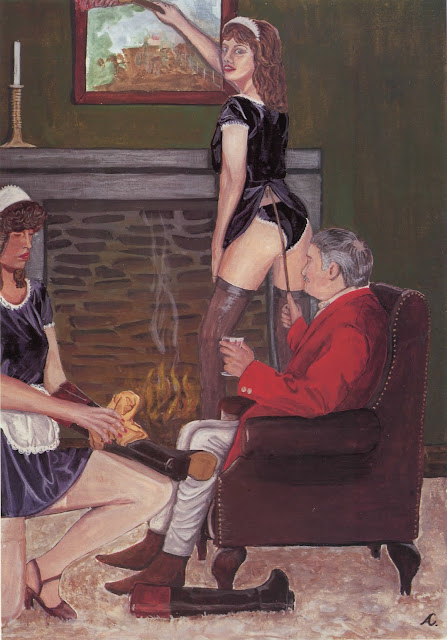 Her sister shot a quick glance over to the distraught girl, then, fearing that Sir Rodney might catch her inattentiveness, looked back down and continued with her polishing. Both girls knew what was coming; it was just a matter of time… and that time had now arrived.
‘Right, you two!’ he barked, easing himself out of his leather armchair, ‘you’ve been a couple of little devils this past fortnight.’ This was his usual lead-up line, and was said whether both or either of them had been ‘little devils’ or not. He continued, flexing the lithe crop between his chubby hands, ‘I do believe a spot of bottom warming is in order.’
The elder sister was told to cease her chore and bend over the back of the armchair he had just vacated. She complied instantly and without question, her head burying itself in the seat, her trembling hands gripping the ends of the chair’s arms. There was hardly any need for her short dress to be raised, but Sir Rodney raised it all the same.
‘As the elder, Kathleen,’ he announced as he stood behind her, brandishing the crop, ‘you will be treated with more severity.’ With that, he yanked down the girl’s knickers to her knees in one swift movement.
‘Oh! Please, sor… please, not on the bare bottom, sor,’ she implored. The man, though, would have none of it. The knickers stayed down, and Kathleen’s bare behind felt six searing strokes of the whippy crop.
‘Come now, Bernadette,’ he called over to the younger girl, as Kathleen rose from the chair and made for the safety of the far corner of the room, her left hand trying to pull her knickers back up while her right rubbed her stinging rear.
Bernadette obeyed. Within seconds she was bending over for her thrashing. The man had announced that she would get six, and that her knickers would remain in place. It was only a matter of modesty that the girls preferred to retain their silk panties; the briefness of the garment — especially when its wearer was stretched over the chair — covered little or nothing of their bottoms, and what they did cover wasn’t exactly protected from the bite of the crop.
Bernadette took her six well, and the two girls were dismissed for the remainder of the day. Up in their room, with the two of them stripped naked, eyeing the reflections of their respective rear-ends in the mirror, and comparing marks, Kathleen, with a sigh, said. ‘Oh! Well. Bernie… to be sure, the little fox got away at least…’
Posted by Fleas63 at 06:00