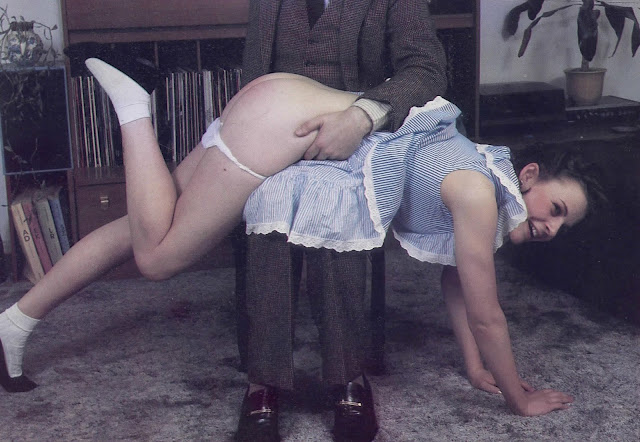 This was hateful. It was demeaning and stripping her of modesty and dignity. She had to keep her legs pressed tightly together too… it was getting worse by the second because the hot skin where his hand landed was raising in heated temperature and the sting was transforming into very real pain.
‘No… ahh… please… it hurts too much… my bottom… please Mr Summers… I’ll try harder… lots harder… please… no more… yeeooow…’
Vicky punctuated her protests and complaints with involuntary kicks of her feet and Mr Summers was treated to a view of his special pupil that no other person would ever hope to see.
Soft nates that had been so smooth and creamy white were now exhibited in stark contrasting red and that red was getting deeper and deeper each time his hand laid across her bottom to teach her the rudiments of what discipline was all about.
His left hand had to press down firmly on the small of her back and she struggled fitfully.
Vicky would never have believed that such pain was possible. She was not sure which was worse, the pain or the shame. But to have to be placed so squarely over his lap whilst he spanked her was something she could never have imagined. She had thought that it would be painful but nothing like this had entered her mind. It was a full explosion of various emotions. The shame was awful, the stinging hurt was impossibly expressive and never-ending, and there was too the fact that she was actually over his lap, like a naughty girl revealing the full exposure of her naked bottom not only to his eyes but also the full treatment of his able spanking palm.
When he had reduced her to tears he released her. There seemed to be no protest left in her now. He directed her to her seat and insisted that she sit there, dress fully hoisted and with both nates fully exposed so that when she sat down she was showing off the cheeks that she once thought so private and precious.
All those silly thoughts were banished. Vicky was still responding to the shameful agony, the degradation and the reminder too that if she had to be disciplined, it would be by the medium of going over his lap. It would forever be a terrible reminder of the distress that her body could be subjected to if ever she thought herself too precious to have to bare her bottom for a real good old-fashioned spanking. 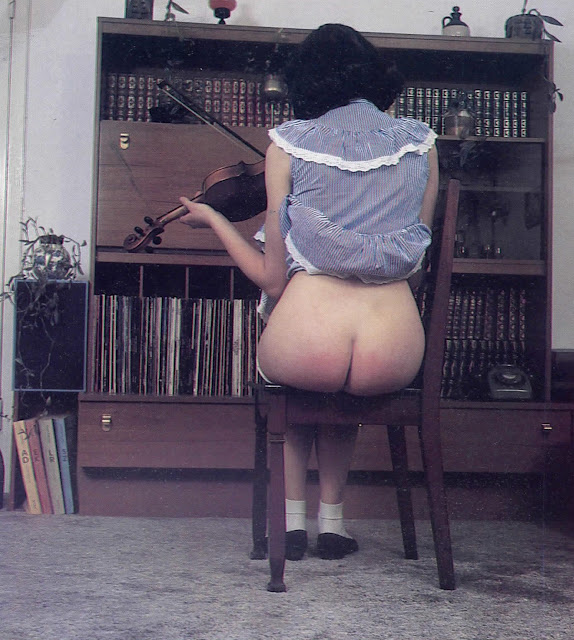