A Cocking their Medical Eyes

By Julie Holmes from Janus 114. The year is 2010, and under a ‘Rationalisation of Public and Essential Services Act’, a state-endorsed corporal punishment system has been introduced for misdemeanours. Consequently, medical supervision for its implementation has become mandatory. We join a group of young doctors as they undergo a training session. 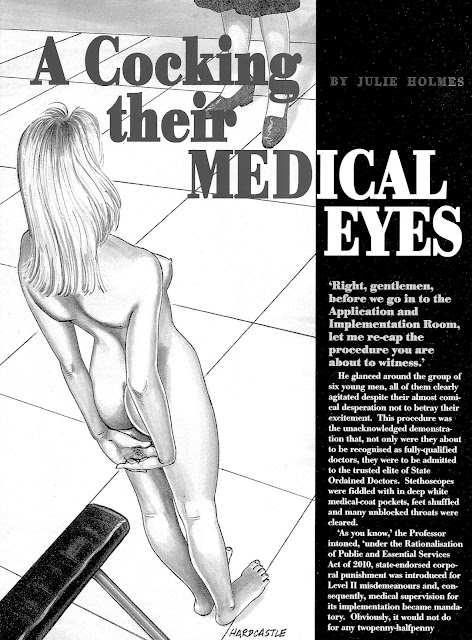 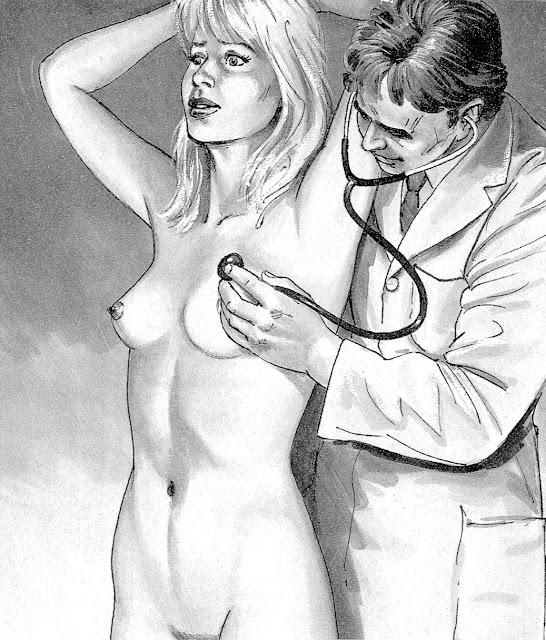 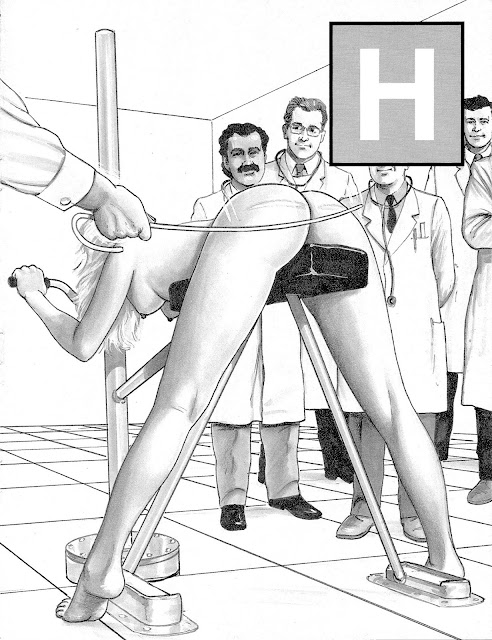 ‘You may examine her, sirs,’
They needed no second bidding. Six hands, still gloved and greased, traced the emergent weals as they metamorphosed from thin white streaks, though reddened furrows to purple, furred tramlines lying parallel across the fullest part of her bottom. 387 gasped at their touch and groaned throatily.
‘Stand clear. The classic tawse.’
A broad leather strap, split for part of its length, hissed through the air and impacted with a distinct slapping sound that echoed around the bare chamber. Even as the two-tongued mauve image took shape diagonally across her rump, its mirrored-twin was being imparted.
Again the young men surged forward, eager to feel, to touch, to exacerbate her agony. She held fast to the grips but bucked so that the just-visible support bar took on a dubiously crude identity. Through the thin latex, their fingers sensed the heat rising through the welts, they saw the beleaguered flesh pucker at their touch and they marvelled at the vehemence of her response to their prodding’s.
When they stepped back, the Chastiser displayed the original implement of her sentence: a birch. It seemed almost laughable: a bundle of twigs, unwieldy, undisciplined; but it hissed through the air with demonic threats and drew from its victim a high-pitched screaming sound that defied interpretation. 387 knew that she would receive at least one more stroke of this fiery torture, but could not stop the wailing sound that snaked from her throat long enough to draw breath. When the second blow landed she was gulping air desperately to try and replenish her lungs for further protest.
As the probing fingers explored the extensively-punished skin, she let forth a guttural howl and writhed shamelessly on the support bar. Her grinding hips seemed to invite further investigations, and her nates were stroked, pinched, scraped and slapped by the six highly aroused students.
‘Slut!’ one of them pronounced sourly as they once more withdrew to observe the Chastiser’s final delivery.
‘Something different, gents. A martinet. Quite a gentle little toy really if applied in advance of the others. However, I think you’ll be interested in seeing the effect it has on already-tenderised flesh. First, see how the unpunished skin responds.’
It didn’t seem as if there was any skin that had not already been dealt with, but the Chastiser was not aiming at her rump. Instead, he took careful aim and brought the bunched thongs down upon Offender 387’s unmarked back. A tracery of pink appeared almost at once, although in comparison with what they had already witnessed, the little whip seemed almost pathetic.
‘And now to the treated area,’ the Chastiser announced, swinging the lashes rapidly and hard so that they cut through all the previous marks.
387 screamed and seemed about to curse them all with their unfortunate acronym, but just in time she checked herself and instead bit steadfastly into the gag and assaulted the support bar in a fashion that definitely hurt her more than the impervious pole. As one, they surged forward and whistled in amazement at the fine filigree weaving its way through the multicoloured blotchings and stripes. One slippery finger followed a trail that started at the Offender’s right hip and led into the deep cleft between her buttocks. Similar tracks were traced and remarked upon as their bearer sobbed uncontrollably. 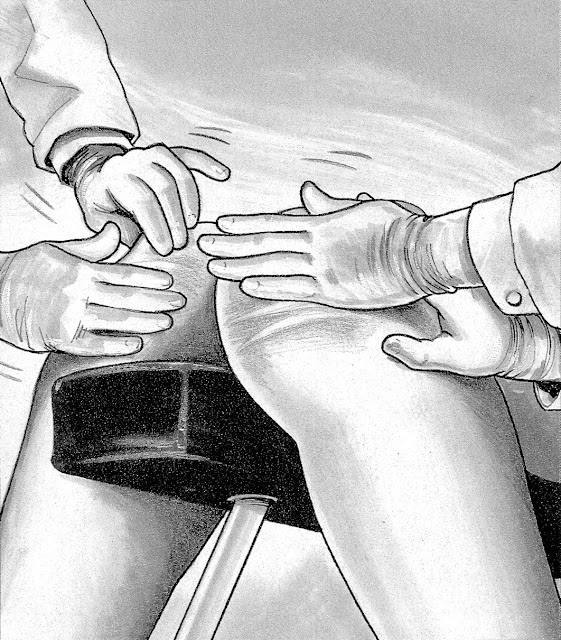 ‘Discretion, gentlemen.’
The Professor was with them again, shepherding them from the room. Watching through the observation panel, they saw Offender 387 receive a final admonition from the Chastiser before also being ushered away, still naked and with her hands folded on her head so that she could not comfort herself en route to the Dormitory for her period of respite.
‘Overseeing such proceedings is not mandatory. If any of you feels you will be unable, for reasons of conscience or otherwise, to supervise any future penal chastisements, you may declare yourselves now, with no loss of status or prospects.’
As was normal, nobody made such a declaration.
Posted by Fleas63 at 06:00