From Februs 44, by Paul Melrose, a.k.a. the late great Alex Birch 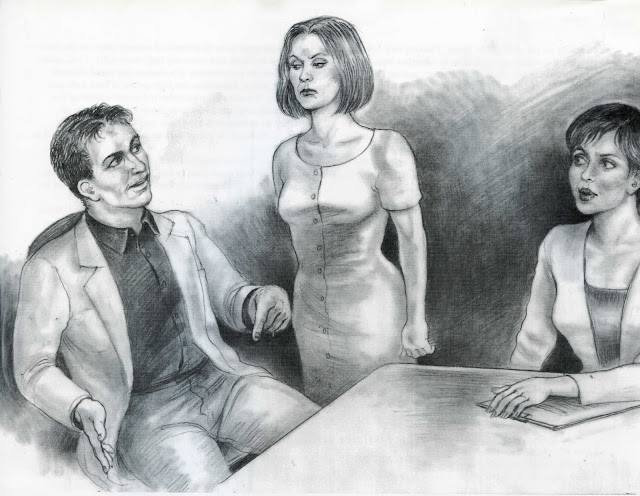 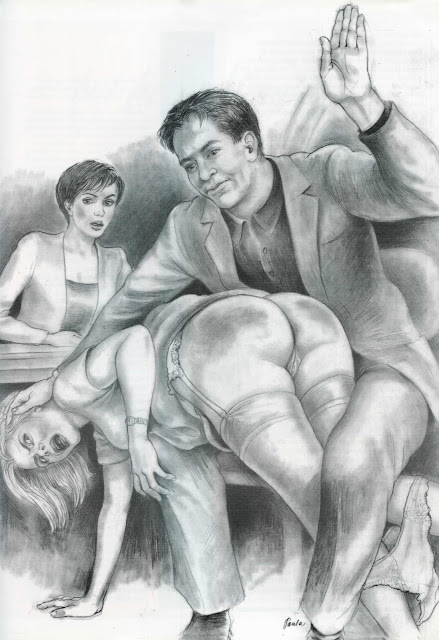 When her spanking was over, the stricken Helen lay across Parry’s lap weeping loudly in humiliation and utter, total defeat. She had climaxed towards the end of the spanking and her orgasm had been massive and indisputable. Helen had experienced a sexual release beyond anything she could ever have imagined and, as her senses returned, she wondered how she could ever rise from this position to report her humiliating defeat to the audience. Parry saved her the trouble by raising and parting his legs slightly thus forcing her bottom higher and her thighs apart.
He looked up at the control room and beckoned a camera to zoom in, a request enthusiastically obeyed as the open-mouthed TV audience was treated to a worms-eye view of what, until that moment, had been Helen Grant’s very private parts. It was graphically obvious, in close up, that Ms Helen Grant was in the throes of profound sexual arousal.
Parry looked across at Nicola Thorne who, good journalist that she was, pulled herself together realising that this was her cue to close the show.
She did so with some aplomb, though in a somewhat shaky voice, and said, ‘Well the show has reached a new peak tonight, or a new bottom… depending on your point of view. I think Mr Parry has proved his point in devastating style and I’m sure you will understand why we are not asking one of our guests to smile and say goodnight. Until next week…’ then she closed the show before looking up first at the champagne which was frothing happily all over the control room and then, in bewilderment, at Helen Grant who had now climbed to her feet and was weeping unashamedly on Gavin Parry’s shoulder, her arms tightly around his neck.
----//----
The following day brought three postscripts to the night’s excitement, the first being an obscenity writ which landed on the desk of RAP TV’s chief executive and which bothered him not a jot. Revenue was so good these days they could afford the best legal advice. The second was a news item that the female rights campaigner, Helen Grant, had suddenly cancelled a UK-wide lecture tour and, at very short notice, had flown out to the Brazilian jungle to study the role of women in a tribal society. Her agent said she would be there for six months and possibly longer.
The last was a call to Gavin Parry at the Tawse offices from Nicola Thorne which soon had Parry grinning from ear to ear.
‘I see, Miss Thorne, so you want to follow up last night’s corporal punishment program with a RAP TV special exploring all the human angles — purely from an objective journalistic point of view, naturally. Of course I understand, Miss Thorne, shall we say Thursday in my office at 9am where I will be delighted to assist your research in any way I can. What was that? Should you do any preliminary preparation for the meeting before you get to my office? Mmmm yes I think you should.’
He paused as his grin widened and he closed his eyes imagining her firm young body at the other end of the phone. ‘In fact, I insist that you do. When you arrive at the fifth floor and before you enter my office, go into the ladies room opposite the elevator and remove your knickers. You won’t be needing them for a good hour or so!’
Posted by Fleas63 at 06:00