It was for persistent talking and giggling during Geography that Jackie Morton, Form 5B, had been instructed to remain behind after her classmates had departed. As the lesson was the final one of the day, all was quiet as the girl sat at her desk in the front row. The only other person present in the classroom was the teacher who had called for her detention. Mr Hall sat at his desk, a couple of yards from where his errant pupil was seated, clearing away the papers, pens and other sundry items. This completed, he turned his attention to Jackie. Resting his forearms on the desk-top, he spoke.
‘I trust, Jackie, that in between your chit-chatting and sniggering you managed to pick up the occasional smidgen of information; that, as far as you are concerned, the lesson wasn’t entirely a waste of time… Eh?’
‘No, sir… I…I mean yes, sir,’ Jackie fumbled her way through her reply.
‘Very well, then,’ chirped Mr Hall, ‘you therefore should not have too much difficulty in giving me a brief summary of what you have learned this afternoon.’ He opened a drawer and extracted a number of sheets of paper. He thrust these at the girl, who got up from her chair and took them from him. ‘Return to your desk,’ he told her, ‘and write down as much as you know about peninsulas.’ Jackie sat herself down. ‘And,’ he continued, ‘give me the perfect example of this geographical term.’
Jackie picked up her pen and stared at the blank sheets before her. A peninsula she penned is a part of a… She screwed up the sheet and started again. Peninsulas are bits of land which… Again she scrunched this effort up into a ball and set about her third attempt. Three more attempts were in fact made — all of them ending up being discarded.
‘Come here, Jackie,’ the teacher barked, ‘and bring your work with you.’
The anxious girl picked up the screwed-up sheets and walked up to his desk. She handed them to the man, who uncreased them and read the few words written on each. He cleared his throat. ‘A peninsula,’ he informed her, ‘is a narrow strip of land projecting into a sea or lake from the mainland… And a perfect example of a peninsula would be the Iberian Peninsula… Got that?… Now, what have you learned, Jackie?’
‘Th-that a peninsula is… er… a narrow strip of sea protected by the land by a lake… er… and a perfect example of a peninsula is the Siberian Peninsula… sir?’
Mr Hall deposited the sheets of paper into the wastepaper basket and, looking back up at the girl, said, ‘Remove your skirt, young lady, and take down your knickers. I shall be back in ten minutes and expect to find you suitably prepared.’
At that he went. With fumbling, sweating hands, Jackie started to unbutton her navy-blue school skirt. This she folded neatly and put on her desk. Then, inch by inch, she took her white cotton knickers down to just above her knees. Standing there, hands at her sides, with her bottom bared except for the very uppermost part where her blouse hung, Jackie waited. She knew on what errand Mr Hall had gone: that he would right now be discussing with the Head just what to do with her. She also was aware of just what the outcome of such a meeting would be; that the Head would propose a caning, and that the cane would be entrusted to Mr Hall for her punishment. 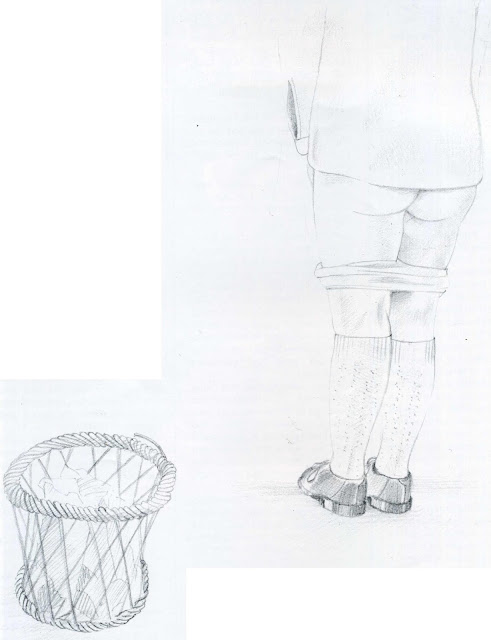 Ten minutes later the teacher returned, cane in hand. He commented upon Jackie’s ‘admirable obedience’ in presenting herself as he had instructed, then spoke the words that the girl had dreaded.
‘Bend over my desk,’ he intoned, ‘grasp the far edge and get your naughty bottom nice and high… You are to receive four of the very best.’
Like a lamb being led to the slaughter, Jackie obeyed, stretching her body across the hard wooden surface of the desk-top, pressing her knees closely together and sticking her naked bottom out and up. This uncomfortable position meant that she had to get up onto tiptoe.
Mr Hall stood directly behind the girl and, laying the rod to one side for a moment, took hold of the hem of her blouse and pushed it away from her bottom until it lay encircling her midriff. The cane was taken up again, and he stood behind and to the left of Jackie. 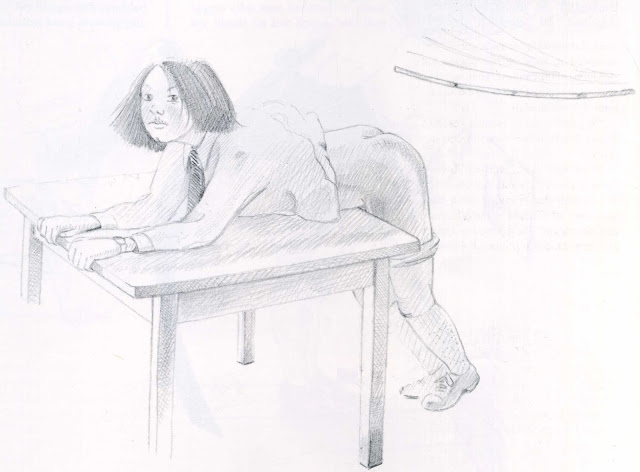 She was made to count out loud each stroke after its landing, and did so — though not without accompanying wails. There was a pause of about twenty seconds between each well-laid-on cut, and Jackie spent these periods quietly sobbing into the sleeves of her blouse.
After two strokes tears began to course down her cheeks. Having received stroke number three she was crying quite audibly, and upon the receipt of the final one she emitted an ear-piercing yell. She shot bolt upright and put her perspiring palms to her bottom.
She was told to dress, compose herself and leave for home. As she walked stiffly to the classroom door Mr Hall called out, ‘Oh , Jackie… An example of a peninsula…?’
The girl turned, her hands clutching the seat of her skirt. ‘Er… Siberian, sir?’
It would not, Mr Hall, Geography teacher, mused, be long before that chubby little bottom of Jackie Morton, Form 5B, would once again taste the Head’s whippy cane…
Posted by Fleas63 at 14:00