Spankers Gallery - Convert to the Cause

Sarah looked up in horror at Miss Kember. Had her ears deceived her? Did she hear right? Had the teacher really said what she thought she’d said? Her doubts were answered by the young woman who impatiently repeated her statement.
‘I told you to report to Mr Weller, girl. Now run along.’
The flaxen-haired sixth-former wasn’t alone in her astonishment at Miss Kember’s instruction. To report to Mr Weller, the Headmaster of St Catherine’s, would, as Sarah and her classmates well knew, result in punishment — to be precise, corporal punishment, and, as the entire school — pupils and teachers — knew, Miss Kember was very much against such correction. A mere fortnight had passed since a letter written by the liberal-minded young woman had appeared in a national daily. In it she most firmly condemned the use of CP. Now, though, the anti-CP Miss Kember was ordering one of her class to visit the study of the Head. It was an act totally out of character, and the eyes of Sarah and the other girls in the room gazed in disbelief at their form mistress.
‘I will not repeat myself, Sarah,’ intoned the unwavering teacher, her hands on her hips.
‘But, m-miss…’
‘What, girl!’
‘You… you can’t send me to the Head, Miss…’
‘Can’t?’ the woman boomed. ‘I most certainly can… Now be off with you at once!’
All heads now turned to face the wretched Sarah. She looked around the class, she looked at Miss Kember. There was nothing for it, apparently, but to obey. She rose from her desk and walked slowly between those of her classmates. Reaching the front of the room she gave the teacher one last impassioned look. ‘Do I have to, Miss?’
‘Yes, Sarah… This instant!’
With a last lingering look at her chums Sarah made her way to the door and was gone. The walk to the Head’s study was a short one — a mere minute later the girl found herself outside the door. Tentatively she knocked. A deep voice from within bade her to enter. Once inside she was told to shut the door and approach the man’s large desk.
‘Well, girl… to what do I owe this dubious pleasure?’ Mr Weller enquired, sitting back into his padded leather swivel chair.
‘I… er… I’ve been sent here by… by Miss Kember, sir,’ Sarah stumbled over her reply.
‘Miss Kember? Why would Miss Kember send one of her form to see me, young lady?’
‘For…’
‘Yes? Out with it, girl.’
‘For… er… punishment, sir,’ Sarah’s voice trailed off as she completed the sought after answer.
The man sat up in his chair. He asked the girl what she had done — presuming that her misbehaviour had to be of extreme gravity The girl replied by saying that she had thrown a paper plane across the class. Not satisfied that such a petty act would move Miss Kember from her anti stance, he probed further, and discovered that Sarah had also been guilty of persistent talking and giggling.
‘So,’ the Head said, a slight smile appearing upon his face, ‘young Miss Kember has seen the light at last… Good for her. Well,’ he continued, rising from his chair and moving across the study, ‘we had better not disappoint her.’ He took hold of a straight-backed wooden chair and, striding towards the centre of the room, placed it with meticulous precision on the carpet. Sweeping his gown behind him and pulling his trousers up slightly at his knees, he seated himself comfortably. ‘Now, girl — over you go,’ came the terse, unfeeling statement from the man. ‘Let us ensure that Miss Kember has returned to her a very sorry, well-smacked pupil, shall we?’
Sarah positioned herself across the Head’s lap. This was a position the young girl had found herself in on several previous occasions. The only difference this time was that it had been the normally lenient Miss Kember who had seen fit to bring about such penance.
Mr Weller got Sarah into just the right position then, when he was completely satisfied with this, he slowly drew up the back of the girl’s blue pleated skirt. Placing this out of the way on her back, he then set about the uncovering of Sarah’s young bottom.
With fingers inserted between the waistband of her navy-blue knickers and the girl’s goose-pimply flesh, he pulled the garment down to mid-way between bottom and knees. Sarah had to wriggle to enable the Head to manage this, and she tried her very hardest to keep her chubby thighs pressed tightly together.
The target area was now cleared and ready for action. Mr Weller gazed down at the twin mounds of young flesh that was Sarah’s backside. The skin was pale and totally unsullied. It would not, he mused, be so for much longer. Making absolutely certain that his black gown would not restrict the movements of his right arm, he raised said arm and then brought it down with a resounding Smack!
This first blow brought not much more than a token ‘Ow!’ from the girl. The second — a much harder effort — and the subsequent spanks had Sarah yelping with much more exuberance. As the chastisement continued she pounded the toes of her plimsolls into the carpet and contorted her under-attack hind-quarters. This served only to enrage the strict disciplinarian further, and the last six or so smacks were administered with something bordering on his full strength.
These last few spanks had the girl curling her right arm behind her in an attempt to protect her burning rear. Her wrist was caught hold of by the redoubtable man and held out of the way in the small of her back. Her schoolgirl rear was now completely at his mercy — and not much mercy was shown. As he had said, Miss Kember was not to be disappointed! 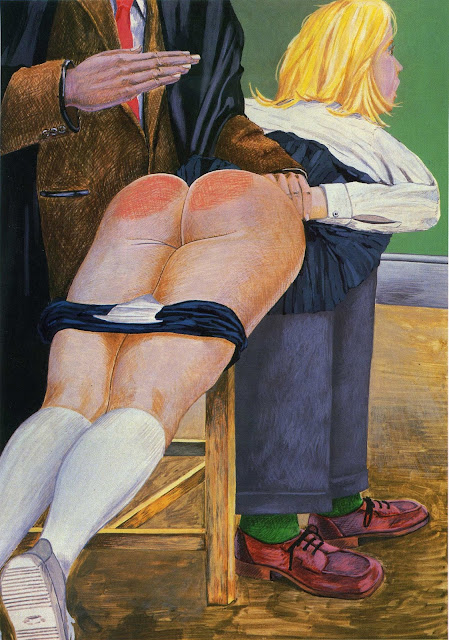