‘Come out here,’ the voice of Mr Illingworth, Art teacher, boomed out amid the hubbub of the classroom, ‘and bring your drawing with you.’ The giggling and general risible sounds coming from the part of the room where the Form’s cheekiest and most infuriatingly disobedient pupil sat being sufficient evidence that this girl, fair-haired, pretty Brenda West, was yet again up to her tricks.
She made her way between the rows of desks and, with a defiant smirk upon her impish features, handed him her effort. Titters and sniggers abounded, and Brenda turned to face her classmates, a broad grin on her face. She was very much the sort of girl who revelled in being the centre of attraction, and now, here she was, centre-stage, receiving the plaudits of over twenty admirers.
Mr Illingworth held the drawing in front of him. ‘Hmmm… Good… Very good,’ he announced, almost to its creator’s annoyance. ‘What do you think, class?’ he asked as he turned the drawing around to face them all. Every member of the class responded in the same fashion, uncontrollable laughter ringing out. ‘Alright! That’s enough!’ the teacher ordered, and, turning to face Brenda, said, ‘You were asked to draw a member of your family, young lady… You know, mother, father, younger sister… that sort of thing. This, unless I’m very much mistaken, resembles, would I be right in saying?… a parrot.’ More giggling rang out.
‘That’s right, sir,’ Brenda replied, herself fit to burst into laughter. ‘It’s Polly.’
‘Polly?’
‘Yes, sir… Polly our parrot. Mum’s always saying that she’s just like a member of the family.’ The classroom was now in uproar. Girls fell off their seats into the aisles in paroxysms of chortling that verged on apoplexy.
Mr Illingworth hushed the mirthful throng, aware that not only was there a chance of the Head dropping by to find out the cause of all this merriment, but also that there were possibilities of a few pairs of school knickers being soiled by their guffawing wearers.
The din having died down, the Art teacher again turned his attention to Brenda. ‘This really is quite good, you know,’ he stated, alternating his glances at the drawing with sideways looks at the pretty pupil. ‘So good,’ he continued, ‘that I think we’ll have it up on the wall.’
Brenda couldn’t believe it. This was not what she had intended at all. Never before had she had any of her efforts pinned to the wall. Only the best of efforts were afforded that distinction. This would mean a loss of face with her pals. They’d think of her as a goody-goody. and nothing, in young Brenda’s eyes, could be worse than that.
‘Go on,’ Mr Illingworth prodded the girl, handing her a drawing pin, ‘post it on the wall.’ Brenda accepted the pin and drawing with a look of utter disbelief upon her cheeky countenance. The class fell quiet as she made her way to the part of the front wall indicated by the teacher. It was only when they heard the man’s next instruction that the girls realised everything was not as it seemed; that Brenda’s little joke had backfired.
‘Not up there!’ he boomed, ‘lower… lower still… that’s it,’ his directions to the girl meaning that ‘Polly’ was on display no more than three feet from the floor. ‘Now,’ the teacher chimed, ‘stay right where you are… No, don’t get up — stay there!’ He then went to his desk and took out his two-tailed tawse. A low murmuring went around the room as he approached the bent over Brenda. 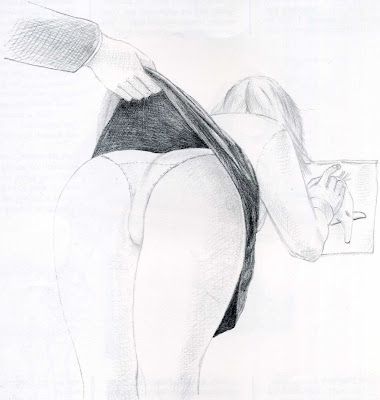 With tawse in one hand, the other lifted the girl’s skirt onto her back, pushing the tail of her blouse up with it. Then the hand inserted itself between the waistband of Brenda’s white knickers and Brenda. The garment was slowly pulled down until it encircled her knees. She was ordered to place her hands on her knees, told that she was to receive six strokes, and warned that should she try to avoid any of this number it would be the worse for her.
Twenty-odd pairs of eyes looked on with awe as the leather thong was raised. It cut through the air with a sickening sound, and thrashed across Brenda’s naked buttocks. The girl let out a yell, as she did after each of the ensuing five. She would not, as Mr Illingworth well knew, be reduced to tears — not in front of her friends. 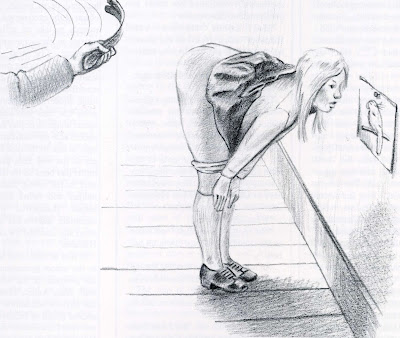 The thrashing over, and Brenda’s bottom carrying six broad bands of red that overlapped here and there, the teacher told the girl to remain in this most unladylike of positions until the lesson had finished. She so wanted to rub her smarting rear, but that would not do; that would show her friends that she had felt her punishment, and she mustn’t, at all costs, allow that to happen.
Although very much sore of bum, the strapping Brenda had undergone was by far and away a preferable outcome than having her drawing deemed worthy of display in the Art room — she even sighed with relief when Mr Illingworth ripped it from its fastening, screwed it up and deposited it to its rightful place: the waste bin.
At least the girl would continue to be the rebel of the Form; her classmates would, as ever, hold her in the very highest of esteem. She had been up to her famous tricks once more, had endured punishment for it, and had taken it like the fearless, stubborn creature that she was. The fact that Brenda was on the verge of tears, that her bottom throbbed like mad, and that she yearned to massage her burning cheeks — all this was lost on her adulating contemporaries.
Posted by Fleas63 at 14:00