When Kate Langley accepted the position of live-in maid to Herbert Wallington at his basement flat in London’s Kensington she could have had no idea just how things would turn out. She had, at the interview, got the impression that he was probably a lonely fellow — he’d said he was a widower — and her friend, Ruth, had warned her that if this was the case there was every chance he’d be after you know what. Nevertheless, Kate, a 19-year-old auburn-haired beauty, turned up as requested at ten on Monday morning.
No sooner had she arrived, the old chap handed her the uniform that he insisted she had to wear during working hours. This consisted of white mop cap, the very briefest of black dresses, white apron, frilly red knickers, stockings and suspenders and red high-heeled shoes. Kate put this preference of clothing down to the man’s age; that perhaps he yearned for the old days when such apparel was quite normal.
In fact, Kate didn’t really mind having to don this uniform — she’d always been keen on dressing-up although the length (or lack of it) of the black dress and the skimpiness of the knickers which, due to the shortness of the dress, were put on display whenever she bent forward — something that simply couldn’t be avoided when dusting or sweeping — did cause her some consternation. She realised that Mr Wallington got the occasional eyeful, but saw no harm in this. 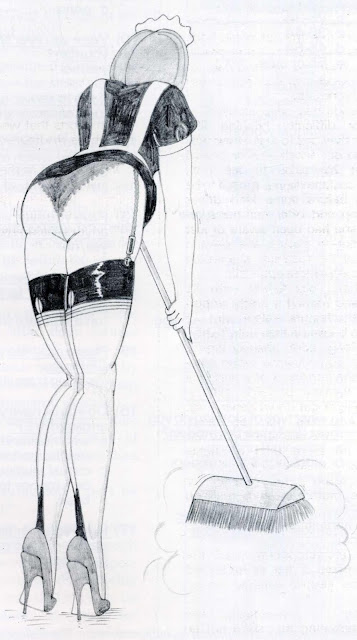 Hubert Wallington was, as it happened, a great believer in the ‘old standards’ — and this didn’t stop at having his maid walking about his flat in clothing more in keeping with the days of his childhood. No, the relationship between master and servant prevalent in those times was also something about which he felt very strongly.
‘Disobedient maidservants should be whipped,’ he had told her on only her second day there, following her serving his breakfast a mere fifteen minutes late. The prospect of being ‘whipped’, as he had put it, didn’t appeal one little bit to Kate, and the girl was more than a little relieved when she discovered that what the old man meant by this was no more than a simple over-the-knee spanking — just like her dad used to give her.
Laying over his lap on the sofa in the lounge, those childhood chastisements came flooding back into her confused mind. Was this really her employer, and not her father, belabouring her bottom with smack after stinging smack?
The tiny knickers — which could hardly have been said to have afforded her bottom anything in the way of protection, were yanked down to the tops of her thighs, and her bare buttocks now underwent a torrent of hard spanks.
This was to be the first of many such incidents — incidents which Kate felt were not too bad — tolerable. There was, after all, the special treat of access to the ‘master’s’ drinks cabinet to help her get over, as he put it, her ordeal. There was also the ‘little bit extra’ in her pay packet whenever her pretty bottom had been attended to during the previous week. And when, on her day off, she saw Ruth, and her friend asked if he had ‘tried anything on’, she answered most definitely in the negative for, what her pal meant by ‘anything’ was the same as her ‘you know what’, and, despite his curious predilection for smacking her bottom, no such moves had been made by the old chap.
Posted by Fleas63 at 06:00