Being Head Prefect at St Angela’s most certainly had its advantages. To start with there was clothing. The girl fortunate enough to be appointed to this exalted post actually had some say in what she could wear. The bane of so many schoolgirls, the white knee-length socks, were no longer a necessary part of her uniform. Stockings and suspenders were permitted. Also, she was allowed to choose what knickers she liked, and the much detested vest — which apart from affording its wearer absolutely nothing in the way of support also caused a good deal of embarrassment when doing PT. Karen Beecham, having been promoted to this status, lost no time in discarding these girlish items — substituting the socks for sheer black stockings; the vest for lacy half-cup bra; the navy-blue cotton pants for frilly nylon knickers of various shades.
Another benefit of being Head Prefect (or ‘HP’, as her underlings had to call her) was that one was more or less ‘outside the law’. What this amounted to was that the chances of finding oneself on the receiving end of the Head’s cane or the Gym Mistress’ slipper were very slight. The reason for this was quite simple: having appointed a particular girl to the position of HP, the Headmaster would be admitting to the rest of the school that he had made an erroneous choice if the girl in question had to be punished just like any other pupil.
Advantage Number Three was, Karen considered, the greatest of them all. This was that the Head Prefect had carte blanche to punish any fellow pupil she wished. To Karen’s great disappointment, this did not mean that she had the authority to wield a cane, but, nevertheless, she was empowered to spank wayward girls. This she did with great relish. Also, she was not permitted to spank them on the bare, but managed to get around this by ensuring that the miscreant’s knickers were pulled up to such an extent that the spanking was, to all intents and purposes, on the bare bottom. It was this indulgence that was to be young Karen’s downfall.
It was a Wednesday, twenty minutes after school had finished, when the Head just happened to be passing Room 17, the Head Prefect’s own private rest room. The sounds coming from within the room were the unmistakeable one of palm striking the rear-end of a girl coupled with the anguished yelps emitting from the other end. The old boy looked in to see just who it was that was undergoing this correction, and found to his disgust that the girl, one Tracy Lyons, was being spanked without the protection of her knickers — the garment having been yanked up in between her cheeks.
In the Head’s study ten minutes later, Karen pleaded that she understood the ruling to mean that knickers must not be taken down. This was brushed aside by the fellow. He wasted no time in exacting the necessary punishment on the disobedient Head Prefect. He ordered her to remove her knickers, which with great reluctance she did — the man giving her a disapproving look when his eyes met with the sight of the frilly scarlet garment.
‘Lift up your tunic, young lady,’ he told her, ‘and touch your toes.’
‘But, sir…’ Karen began.
‘What!… What is it, girl?’
‘I… I’m the Head Prefect, sir… You can’t…’
‘Can’t?!’ he stormed, ‘Can’t?!… How dare you?’
Realising that there was just no way of getting out of it, Karen duly lifted her tunic, turning her back on the man as she did so, then, ever so slowly, she pointed her arms floorwards, reached down and touched the toes of her shoes.
‘Four strokes!’ came the bellowed announcement.
The cane swished down with great speed, striking the girl’s bottom high up. She exhaled audibly and emitted a shrill yell. Seconds later the second stroke fell and lashed Karen’s trembling buttocks just below its predecessor. Karen stifled a scream, and tried her hardest to remain still. She so wanted to put her hands to her buttocks and cover her highly vulnerable bottom-flesh. This, though, would serve only to worsen the situation, and more than likely give rise to an increase in the amount of strokes.
She breathed hard as she awaited the next cut. It came — much lower down on her bum. Karen could not hold in the yell, and screamed at the top of her voice. A single tear dropped onto her right cheek, while her other cheeks now had appearing upon them a third angry weal.
The fourth and final stroke came after a longish pause, during which young Karen tried to compose herself, sniffing back the tears without much success. When this final cut came it was on the lowermost part of her bottom-cheeks. This area, as the girl herself knew only too well, was a highly tender part, and she shot up upon receipt of this one, clutching her trembling hands to her sit-upon.
With her right hand gently massaging her stinging rear, her left grasped the front of her tunic and pulled the garment up to her face. Drying her eyes on the tunic, she danced around the study, making quite a display of below-the-waist charms.
The order then came to stand in the corner with her hands on her head. ‘…making sure, young lady,’ he added, ‘that you keep that naughty bottom of yours bare!’ 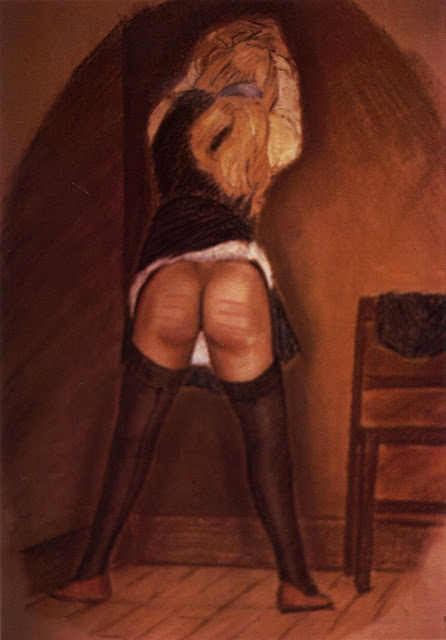