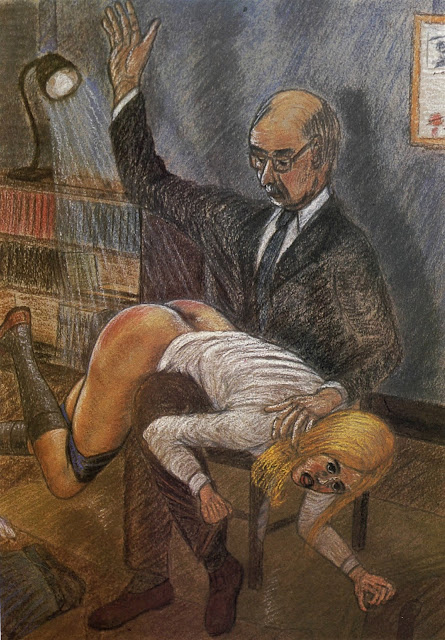 The only sounds to be heard by the girl were the gentle ‘tock-tocking’ of the clock and the occasional creaking of the chair when she shifted her position, attempting to make herself less uncomfortable. She had been kneeling on that chair for five minutes now, and her nylon-clad knees were beginning to hurt somewhat. He could have given her a cushion at least. The pain in her knees, though, would be as nothing when compared with what he had in store for her — of this she was well aware. The clock chimed, announcing that it was quarter past the hour — 4.15 to be precise. The ‘tock-tocking’ continued, the chair creaked again under her weight.
Being Head Prefect had its advantages — not least the fact that one was permitted to wear whatever underwear one wished to. Not for Angela the white cotton vest and knickers — the bane of the other, less fortunate, girls in her year. These universally detested garments gave way to frilly, low-cut bra and pretty, lace-trimmed pants. There were no white knee-length socks either for this highest grade of pupil. Luxuriant, sheer black nylons and suspenders took their place.
Unfortunately for Angela, however, was the fact — a most unfair one she reckoned — that Head Prefects were still subject to the same strictures the other girls were subject to. The rules could not be altered in any way — despite her exalted position. This then meant that, should any of the school’s innumerable rules be broken, punishment of a severe, corporal nature would ensue — if anything more severe for her than would befall one of her inferior fellow-pupils — this being due, of course, to the fact that as Head Prefect one was expected to set an example to the others.
Angela’s heart missed a beat as the door behind her creaked open and was shut. The unmistakeable tones of the Head boomed about the room. 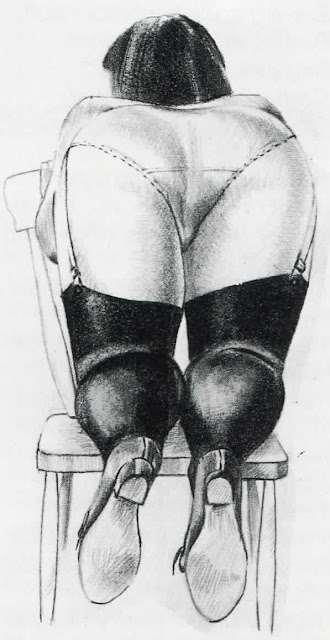 ‘Jolly pleased to see that you have prepared yourself, Angela… saves such a lot of time, don’t y’know. Now, I suppose you’ll be wanting to get it over with, eh?… kept you waiting somewhat… sorry about that m’dear… spot of bother in the staffroom kitchen… burst water pipe don’t y’know… got old Edwards onto it… straight in there he was with his pot of plumbers’ sticky stuff… dashed good man, old Edwards… turn his hand to anything… don’t know what we’d do without him…’
The last thing Angela wanted to hear about at this moment was burst water pipes. She had been cursing herself for many minutes for not taking herself off to the loo prior to keeping her appointment here in the Head’s study. If the absent-minded old twit didn’t get a move on pretty soon old Edwards would have another puddle to take his trusty mop and bucket to.
‘…Still,’ the Head waffled on, ‘these things are sent to try us I always say. Now… where were we?… Ah yes, my Head Prefect, Angela. Been a naughty young wench again, eh?… what was it this time?… smoking in the dorm…?’
He couldn’t even remember why she had been sent to him, the silly old duffer, Angela thought. Forget his head if it wasn’t stuck to his neck — quite possibly with some of old Edward’s plumbers’ sticky stuff.
‘Graffiti, sir,’ she mumbled.
‘Beg your pardon, miss?’
‘Graffiti,’ Angela repeated.
‘Graffiti?… Sorry, what are we talking about?’
The girl emitted a long sigh. ‘The reason I’m here, sir… I was caught by Miss James writing on the loo wall.’
‘Miss James?… Miss James writing on the loo wall…?’
‘No, sir… me; I was writing on the loo wall.’
There was a lengthy pause, then: ‘Oh!…Writing on the loo wall, were you?… And what were you caught writing, Angela?’
‘Poetry, sir.’
‘Poetry?… But that’s not for lavatory walls… that’s for exercise books, surely?’
‘Not my kind of poetry,’ Angela murmured.
‘Sorry?… What was that?’ No answer was forthcoming. ‘Er… what, um, what did you scrawl on this wall, then?’
Again no reply. ‘Come on, girl… I’m keen to know… maybe we have a budding Shelley or Keats in our midst… tell me; tell me what Miss Thingumybob caught you writing.’ He had moved around the chair and stood facing her now. ‘Come on, girl… out with it.’
Angela emitted another lengthy sigh, cleared her throat and recited her piece of verse.
‘Old Edwards paints, but ‘tis all in vain… The shit-house poet strikes again… sir.’
‘Oh! Very droll… Very ladylike, I must say, Angela… Proud of yourself, are you?… We’ll see what a dose of my finest rattan does to improve your manners, shall we?’
With that, he strode over to his cabinet and extricated the cane. Shutting the cupboard door, he paced back over to the awaiting Angela. Her knuckles turned white as she gripped on to the back-rest of the hard wooden chair.
‘Three of the very best, I think,’ he announced, and proceeded to give the trembling girl just that. The first in the centre of her proffered buttocks; the second much lower down where there was hardly any protection at all, and the last one — twice as hard as its predecessors — right across the tops of her thighs, below the flimsy pants and on bare flesh. 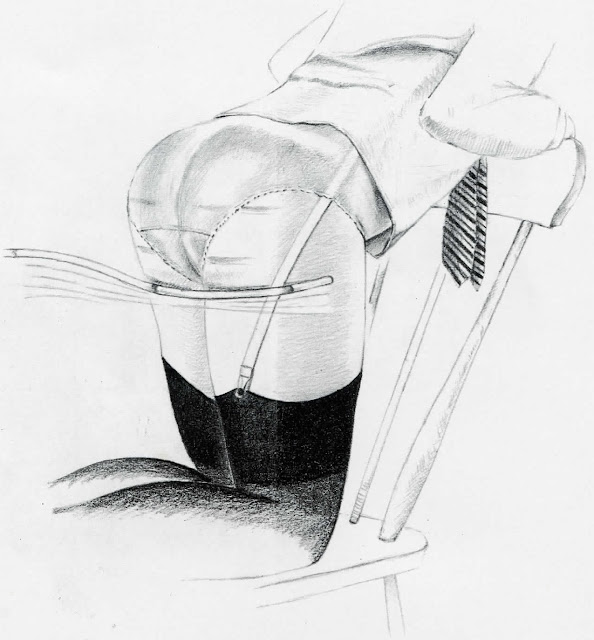 The whimpering Head Prefect was instructed to dismount and dress. Whilst she pulled her skirt on over her punished hindquarters the old boy busied himself with the entering of the punishment in his large, black, leather-bound book.
Angela was told to sign alongside where it said: Three strokes. Number two cane. Seat of knickers. With a trembling hand she scrawled in her name.
The clock chimed again. 4.30. The Head slammed the huge tome shut. Looking particularly pleased with himself, he glanced over at the girl. His final words prior to dismissing her added insult to the injury that swishy cane had inflicted.
Holding the cane between his sweaty palms and caressing it lovingly, he said: ‘The poet writes, but ‘tis all in vain… The Head gives her three strokes of the cane!’
Posted by Fleas63 at 06:00