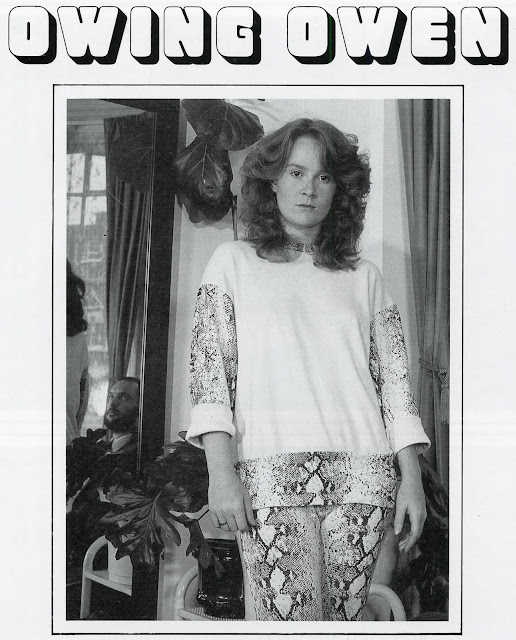 This is the tale of a particularly eventful day that I spent at the home of my boss, Mr Owen. You can just make him out in the mirror — he’s the one with the beard! The reason for my being at my boss’s house was a very strange one; one that I would never have believed possible had anyone told me it was to happen. You see, a girl I know, Linda, works for our strongest competitor, an up-and-coming clothes designer. I had heard through the office grapevine that Mr Owen had come up with a design which was considered by all to be a potential money-spinner. I mentioned this to Linda in passing, and together we hatched a plan which would involve me stealing the design, passing it on to her, then being rewarded by her own employer. I work in an adjoining office to Mr Owen and, as he is often out — and I have the keys to his safe — the idea seemed brilliant in its simplicity. At 3.20 on Friday — just when he should have been heading towards the clubhouse with his golfing chums — he entered his office to find the safe open and me, red-faced, clutching said design. He was outraged, of course, and I was threatened with dismissal instantly. ‘Unless,’ he said to me, ‘you agree to accept an alternative form of punishment.’ Now, I’ve known for ages that Mr Owen not only fancies me but that he has a ‘thing’ for girls’ bottoms. It therefore came as no great surprise when he qualified that statement with the words: ‘A bloody good hiding, young lady.’ Faced with the sack, what would you have done? The fact of the matter is that I quite fancy him and, while the idea of a bloody good hiding didn’t actually appeal, I was somewhat intrigued at the prospect. It was agreed that I call upon him at his house the next day at 11 am. ‘Bring your night things,’ he told me. I didn’t ask him why; I didn’t want him thinking me naive. Bring my night things, eh? Things were looking up… 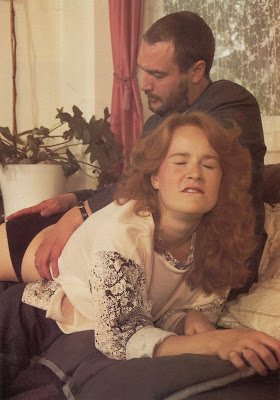 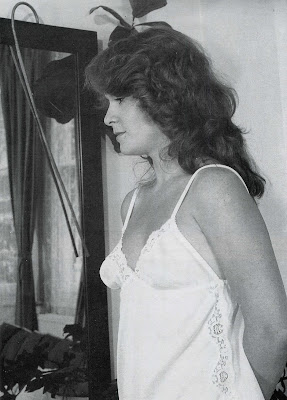 It’s explained to me why I was told to bring my night things with me. ‘More appropriate attire,’ he says. Appropriate for what? A glance over at the mirror gives me my answer. A nasty-looking cane hangs there. ‘But I haven’t had the cane since…’ I blurt out, stopping myself in mid-sentence. ‘Since when?’ he asks. ‘Since daddy caned me for calling the vicar a… er… naughty word,’ I tell him. 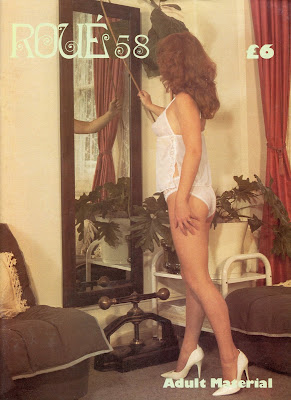 He’s interested and asks me to tell him all about it. ‘I was just turned eighteen at the time,’ I began. ‘I called the Reverend Inkpen a stupid fart.’ A smile comes to Mr Owen’s face. I give a little grin myself. ‘Go on,’ he says. Daddy fetched this cane from the garden shed. It hadn’t seen light of day since he used to use it on my older brother. Long and swishy it was. Well, I had to go to my room and… er…’ I get embarrassed. 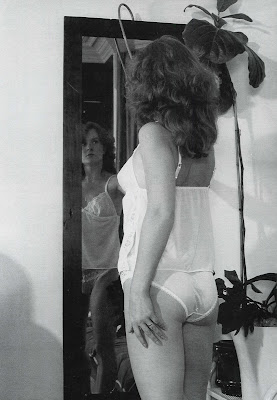 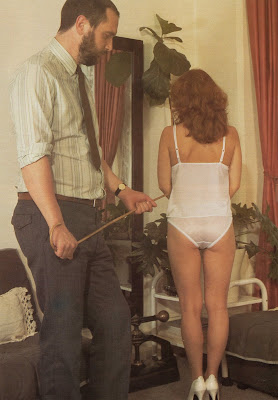 I flop over and have a little cry. ‘That’ll do,’ I hear him say. Thank God for that. My bum aches like mad! I can feel him standing over me with that cane still in his hands. He whips it through the air a couple of times, smacking it into his palm. I wince. Wait till Linda hears about this little lot — she won’t believe a word of it. A tear plops down onto the cushion. I sniff. Surely he thinks I’ve had enough. Doesn’t the sight of poor little me all tears and sniffles… doesn’t that make him feel sorry for me? 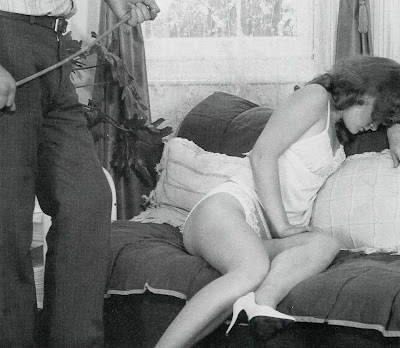 I keep my head buried, not wanting my eyes to meet his, thinking that if they do he’ll speak to me — and that what he has to say won’t be in the least bit pleasant. God, how my bottom hurts — though it is cooling down a bit now. Another tear runs down my nose. I sniff but it drops onto the sofa. I feel so very sorry for myself; repentant; penitent. I feel just like a naughty little girl who has been punished — which is true when I come to think about it. 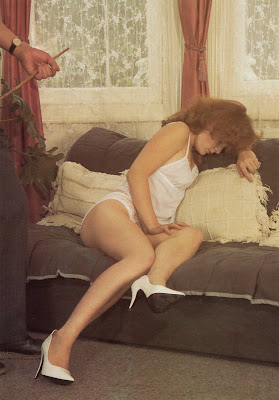 I wipe my brow. I’m feeling a little better now; the real hurt in my bottom is subsiding, leaving a sort of… well, a sort of glow. It’s not unpleasant, actually. I can feel his eyes leering at me; that strong, handsome man mentally undressing me. How unlike all those wimps at the office he is. Okay, he’s just whacked my poor little bottom, and it hurt like hell, but I know of a few girls who wouldn’t say no to being half-naked on his sofa. Oh, I so want him to take me in his arms and hug me; to pull me to his masculine chest and comfort me. But it doesn’t look as if he’s going to. I just hope that my punishment’s over. The glow in my bottom is growing and spreading through my body. I’m starting to get damp between my legs. I want to touch myself there — or, more to the point, have him touch me there. This never happened to me when daddy caned me… mind you, Mr Owen isn’t daddy, is he? I wonder if it’s normal to feel this way. Who cares? I’m feeling this way… and it’s lovely. Oh, order me about, Mr Owen; humiliate me; make me obey your every whim. I think this but cannot speak the words. The silence is broken. His dark-brown tones reach my ears. ‘You will now strip off, Cheryl,’ he says. Anything you say, I think to myself. I stand. What next? I wonder. 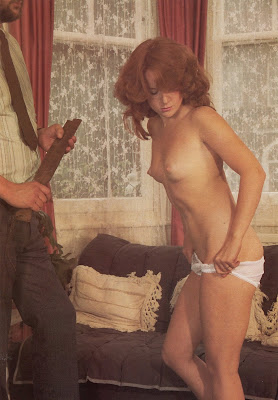 I’ve been told to wait whilst he has a freshen-up. Time to relax for yours truly. Yes, I am looking forward to what is to come. But what he said to me as he left the room has got me feeling that I might have been better advised to take my P45 and run. ‘I propose three weekly sessions with you, young lady,’ he told me, ‘in addition, that is, to today’s. For the next three Saturdays you will report here for further punishment. You will be caned, you will be slippered, you will be spanked, and you will be strapped. Only after this period of correction will you have learned properly the error of your ways. What you have received today is merely a foretaste of what is to come… a mild expression of my anger at your misbehaviour. You will throughout this time be afforded fully-paid holiday. As well you know, you’ve been treated extremely leniently today — I’m sure that your mother spanked you harder than I did, and I’m certain that dear daddy used his cane on you to greater effect than was the case today. You will learn that spanking and caning — indeed all forms of discipline — are meant to hurt. The effect it has had on you today was as a little turn-on. We both know how we feel about each other; you know I fancy you, and I know that you want to have you-know-what with me. That’s fine. But punishment is what you were meant to be here for, and I feel most strongly that today’s little session has not so much served as punishment but more as pleasure. I do not blame you for this, Cheryl — there are many ways that a person’s body can be excited sexually; aroused, and corporal punishment is but one of them. We both seem to have found today’s session arousing, and we both feel a need to do something about that arousal. But starting next week I will begin to show you just how punishment should be carried out… and precisely what effect it should have on naughty young ladies. If you do not agree to this — indeed if you don’t wish to join me upstairs after I’ve had my bath, then all you have to say is ‘No’. I am not forcing or coercing you in any way. What have you to say?’ 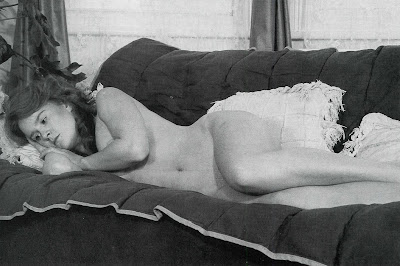 Well, dear reader, what would you say? All those females out there — how would you react? I said: ‘Whatever you say, Mr Owen,’ again pretending that I wasn’t over-keen on the fun that was to follow — for I am keen; keen as mustard! And, who knows? — the next three Saturdays could end up the same way. Oh, I do hope so, my masterful Mr Owen…
Posted by Fleas63 at 06:00