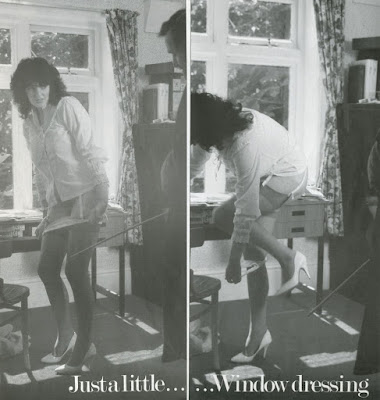 Under the bright display spotlights in the window, the girl battled determinedly with a recalcitrant mannequin, wrenching its arm round to slip a silk jacket over its shoulders. In the darkness of the street outside, senior floor manager Mr Hobbs stood unseen, watching the youngster almost losing her struggle with the unwilling plastic arm.
The nakedness of the mannequin’s lower half, with its carefully contoured curves, contrasted strangely with the lower half of the new junior in the department: her full skirt disguising yet hinting at the young-womanly form beneath. A form, indeed, thought Mr Hobbs, with which it would be a pleasure to find oneself in intimate contact.
She bent to pick up a fallen scarf; tight at the waist, her skirt fell in soft, suggestive folds, the swell of her hips and narrowness of her waist enhanced by the fall of the flowered print figure-hugging corduroy, the blouse riding up at the back to reveal a bare panel of pale flesh above her waistband.
Hobbs had noticed Suzanne when she came for her interview three weeks ago, fresh from design school — and as naive as he could wish. She turned again, her bottom almost pushed against the glass as she heaved a piece of the window display into position.
He turned to go back into the store, and Suzanne glanced sideways as she caught the movement outside. But he was gone. The next time she looked round, Mr Hobbs was standing by the open display window door, looking down at her as she cleared up her staple gun and remaining pieces of masking fabric.
‘Oh, Mr Hobbs, I’m sorry — I didn’t hear you,’ she started.
‘You don’t seem to have done a very good job with this window,’ he commented drily. ‘Miss Drummond, isn’t it?’
‘Er yes, Mr Hobbs, Suzanne, um, Drummond.’
‘New, aren’t you?’
‘Pretty new, yes: I only started last Monday.’
She stood up. His hand was resting casually on the mannequin’s still exposed waist, and it slid down unthinkingly to pat the rounded rear-end, a move which Suzanne could not fail to notice.
‘You’re going to have to wake your ideas up, my girl, if you’re, going to get on in this company: or you may end up with a red bottom and no job.’ He slapped the mannequin’s bottom so hard the figure rocked dangerously forward. 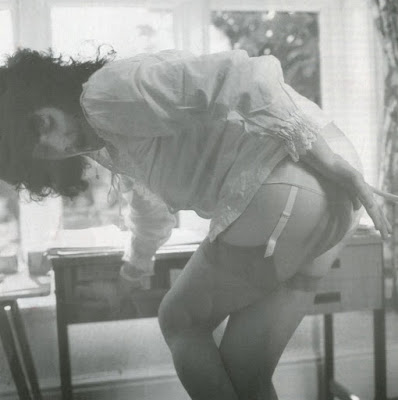 ‘Oh, oh…’ began Suzanne.
He reached out quickly: ‘I’ve got it, not to worry.’
Turning to pick up a hat, Suzanne bumped heavily into the mannequin, sending it crashing through a plate glass table amid a shower of jade chess pieces: ‘Oh, Christ almighty.’
Mr Hobbs suppressed a slight smile. It was quite possible he would have been able to prevent the mannequin toppling over. Had he not been busy giving it a helpful push…
Suzanne moved frantically over the floor on hands and knees, almost gibbering with shock and disbelief: ‘I just don’t understand how…’
‘Leave those things, Miss Drummond. I think you’d better come with me.’ The girl stood, tears in her eyes, and nodded: ‘Yes, Mr Hobbs.’
The journey to his office at the rear of the building on an upper floor took for ever, Suzanne almost succeeding in containing her tears. The door closed behind her and she stood facing him, seated now behind his desk.
‘What have you got to say for yourself, young lady?’
The question was ridiculous. What could she say? What could she do that would make up for the damage — no, devastation — down there in the window? She said nothing.
‘Well, I’ve got something to say. You have got to be punished, and it’s my sad duty as senior manager on duty to attend to that punishment.’
‘Punished, Mr Hobbs?’
‘Soundly punished, Miss Drummond. On that young bottom of yours.’
‘You can’t mean…?’
‘What?’ he half smiled.
‘Well, not, er, corporal, um.’
‘I most certainly do. What else do you expect for such an offence? You’re how old?’
‘Nineteen, Mr Hobbs.’
‘Exactly. Benefit from a sound thrashing.’
‘But you can’t, well, beat me, Mr Hobbs, surely?’
‘I can, my girl, and I will.’
‘But…’
‘No buts, Miss Drummond. I’m going to fetch something suitable. So you’d better get used to the idea while you’re waiting. Right?’
There was no answer as he strode out of the door, leaving the teenager dumbstruck with amazement. ‘This cannot be happening to me,’ she thought, ‘I volunteer for overtime and look what happens…’
Hobbs took his time in the equestrian clothing department, swishing experimentally the selection of eight or ten riding whips until he had narrowed the choice down to two, but then a more entertaining idea occurred; he went instead to the theatrical line department and spent some little time finding what he wanted.
----//---- 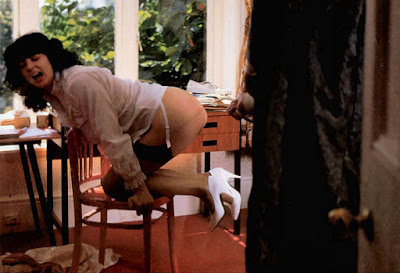 As the door closed behind him, the girl’s eyes were drawn to the cane in his hand: ‘You’re not…?’ Then to the long black scholastic gown he was wearing.
‘Skirt off, if you please, Miss Drummond. This won’t take long.’
‘But Mr Hobbs, you can’t,’ she protested weakly.
‘Get it off, or you’ll be sorer still.’
‘But you can’t, Mr Hobbs…’
‘Now look,’ he interrupted, ‘either you take what’s coming here and now, or you’ll be out of here so fast your feet won’t touch the ground.’
Suzanne started to unhitch her skirt. Her eyes — dark brown pools of reproachfulness — met his briefly before she crossed her arms and lifted her sweater up from the waist, pulling it swiftly to shoulder-height, her breasts bobbing softly under her blouse. The jumper came over her head; she shook the mane of dark hair out of her eyes.
The effects of the summer’s sunbathing had not entirely worn off, her legs still a pale golden colour.
‘How hard…?’ she began.
‘We’ll see. Come here.’ She walked over to him, breasts bobbing in rhythm. He took her wrist and turned her to face the corner, lifting the wrist up behind her back before reaching round for the other one and placing that in the same position.
‘Stay like that while I make a phone call’ he ordered, it seemed interminable, as Mr Hobbs talked to Security to reassure them that everything was in order.
‘OK then Harry, I’ll see Miss Drummond signs out and then I’ll come round to the bay so you can let me out. Fine, fine, OK, see you shortly.’ A ping as the receiver was replaced.
A slight rattle as the cane was picked up again. Hobbs couldn’t believe how easy it had been to get the new girl to accept a beating. This would be the third female backside to receive his attentions in the two years since he had joined the store. And by the looks of it, the most appealing.
For Suzanne was an exceptionally pretty teenager, her hair in a thick mane tossed back from her forehead, the face clear and honest, the figure inspiringly good and — as Hobbs now knew — a particularly well-proportioned oval bottom.
‘Have you been punished before?’ he asked.
‘No, Mr Hobbs, never.’
‘Ah well, that’s an omission we’re about to put right, isn’t it?’
‘Look, isn’t there some alternative to… to — actually whacking me?’
‘Come here,’ he told her.
Over his lap she went, still whimpering her protests, which became louder as his fingers hitched into the waist of her knickers. 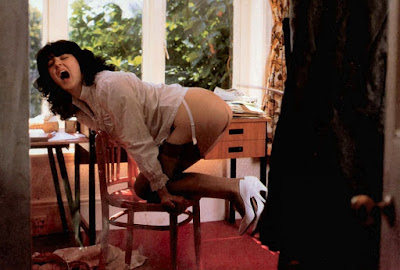 ‘Lift up.’
‘Do you have to do it with my bum bare, Mr Hobbs? I’m a bit old for this treatment, aren’t I?’ she wailed, her toes drumming on the floor. But she lifted her hips clear and the knickers slid easily off the smooth rounded mounds all the way down to her knees.
The teenager’s buttocks were full and fleshy, soft to the touch, the deep crease between them complemented by the twin creases at the base, arrowing towards the dark curls at the apex of her legs.
‘Not too hard, Mr Hobbs, I’ve never had this before…’ she bleated. ‘Ooowwoooh’ as the first slap of his palm landed with a flesh-quivering impact on her right buttock.
The tattoo of smacks spread a glowing red to Suzanne’s rear-end, the stinging sensation driving her to louder and louder yelps as Hobbs continued relentlessly. No point, after all, in letting her off lightly just because she had an attractive bum. And besides, he was enjoying himself…
The spanking slowed and finally, stopped, Hobbs resting his hand on the well-warmed flesh, letting his fingers stray down to that most entrancing of areas.
‘Get up,’ came the sudden command.
Suzanne slipped to the floor, grasping her throbbing backside with both hands.
‘Stand up, girl, you’re only half way there.’
She pulled up the half-masted knickers, only to be told to take them down again and to bend over the back of the upright chair in front of the desk.
‘Legs apart and bend right down. We’ll see what you say to this.’
‘Please, Mr Hobbs, isn’t that enough? You gave me a hell of a whacking, I don’t need caning too.’ A pause. ‘Please…’
‘Bend over this minute: you’ve just earned another two strokes. Any more delay and it’ll be four.’ Suzanne placed her feet apart and bent swiftly over, the fleshiness of the cheeks slimmed but still impressive.
‘How many am I going to get?’
‘Another two for asking. Get those panties off, would you?’
The white cotton fluttered down and she resumed her position: ‘Get those feet apart, Miss Drummond, and be quick about it.’
Finally satisfied with her position, Hobbs laid the cane across the fleshiest lower part of the target and swung it up, up, until with a brief Pphheeww it descended to bite deep into the welcoming buttocks: ‘Arrrr… God it hurts.’
Thirteen more times the cane rose and fell, until the cheeks were criss-crossed with reddening weals. Twice Hobbs had to stop and wait for the girl to reassume her position, with threats of extra strokes for delaying. But finally, she had had the full fourteen and was slumped, sobbing, over the chair.
‘You can get up now.’ Still she didn’t move, her shoulders heaving with the sobs, her hands seeking tenderly the sorest parts of her anatomy.
‘Get dressed, girl. It’s over. For now. Report back here at the same time next Thursday.’