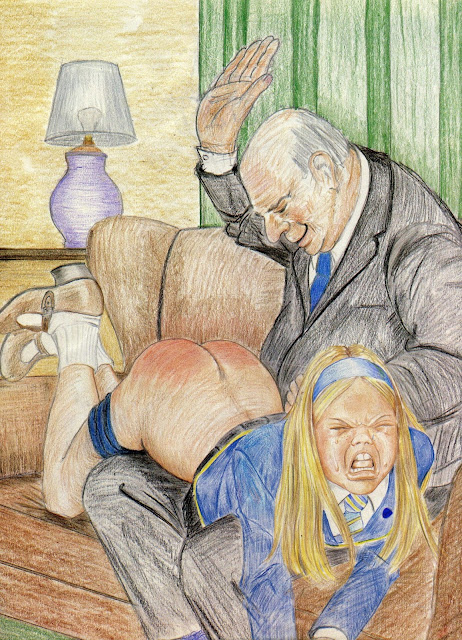 ‘But of course, my dear,’ the elderly gentleman said in answer to his daughter’s request that he look after Mandy, her sixteen-year-old daughter. He squeezed her hand and said in reassuring tones: ‘I’ll take good care of her — don’t you worry.
‘It’ll only be for a couple of days,’ the woman explained. ‘But with Leonard away on business… and now this conference up in Scotland… of course, I don’t have to go…’
‘You go to your conference,’ the old boy interjected. ‘She’ll be alright with me.’
‘Are you sure you don’t mind, pop?’
‘Mind?! — perish the thought. How could I possibly mind looking after my own granddaughter? It’ll be a pleasure.’
The woman patted his hand ‘She’s not sugar and spice and all things nice, you know, pop.’
The man chortled. ‘What girl is? I recall having to tan your backside on more than one occasion. You were hardly a little angel, my dear.’
His daughter smiled, recalling the frequent hidings her father had handed out to her during her childhood. ‘Yes, well don’t you stand for any nonsense from her, will you, pop? She can be quite a handful at times, you know.’
‘I hope you don’t stand for any monkey business from her,’ he said, eyeing her sternly.
‘Well,’ she replied, bowing her head slightly, ‘it’s difficult… what with Leonard’s views on the subject. You know him; you know he’s anti-hitting.’
‘Still hasn’t changed, eh? I’ll have to have another chat with that young fellow,’ he intoned gruffly. ‘To spare the rod and all that…’
‘Well,’ his attractive daughter said, ‘I wish you luck. I haven’t had any luck in that direction after eighteen years of marriage. Of course, Mandy does get the odd hiding from me when Leonard’s not about. But she more often than not tells her father, then there’s an argument, then we don’t talk for a couple of days. Sometimes I wonder whether it’s all worth it, pop.’
The old man shot her a glance that made her feel just like a naughty schoolgirl, herself. ‘Worth it?! My dear, of course it’s worth it. You don’t want Mandy to grow up to be like so many of the young women of today, do you?’
His daughter shook her head.
’It didn’t do you any harm, did it?’
Another shake of the head.
‘Well then. Now don’t you worry. Mandy will behave while she’s with me. And if she steps out of line… well, I think you know how I’ll deal with the matter.’
The woman kissed her father on the forehead. ‘How lucky I am to have a father like you, pop.’ The old boy smiled.
----//----
‘How was school today, Mandy?’ the man asked his granddaughter on her arrival at his cottage on the first day of her short stay.
‘Okay, grandad,’ came the reply from the pretty, blonde schoolgirl.
‘I must say,’ he went on, ‘I wasn’t as fortunate in my day as you kids today.’ Mandy looked up at him as he stood threateningly near to her as she sat on the sofa. ‘No — nowhere near as fortunate. In my day we only got something like an hour for lunch. You kids, it appears, get considerably longer than that.’
A sick feeling came to Mandy’s tummy. She looked away from him and back down at the magazine she was trying, without much success, to read. She flicked through the pages, trying her best to display an air of casualness. ‘We only get an hour-and-a-half, grandad,’ she said.
‘How then,’ he began, sitting himself down on the sofa next to the girl, ‘can you explain your presence at the local burger bar at five minutes past three?’
The nauseous feeling that Mandy was experiencing was intensifying rapidly. She opened her mouth to speak but only managed an: ‘I… er…’
‘When I returned home I telephoned your school.’ Mandy looked decidedly anxious. ‘Mandy,’ the young lady informed me, ‘she’s not at school today, sir.’ The look of anxiety on the pretty little face had now changed to one of terror. Panic was setting in.
There then ensued a lecture on the pitfalls of not attending school; on missing out on one’s education. Then, in a movement so swift that it belied the old boy’s years, the errant young girl was across her grandfather’s strong thighs. There were pleas and protestations, lots of: ‘I’ll tell dad’s, but the man dismissed these with an assurance that he fully intended to tell her father, whether she did or not.
The girl’s black school skirt was flipped up onto her back, her navy-blue knickers were yanked down to the tops of her thighs. Mandy, aware now that any objections would be in vain, resigned herself to the fact that her bottom was about to undergo a spanking. She flopped her arms over her grandfather’s legs and waited.
The firm right hand of the portly old gentleman was being raised above the unfortunate girl’s chubby bottom. It, quite obviously, was time for Mandy to pay…
----//----
The following three pages of our very popular Gallery section are devoted to three varying types of chastisement — and three varying methods of administering those chastisements. 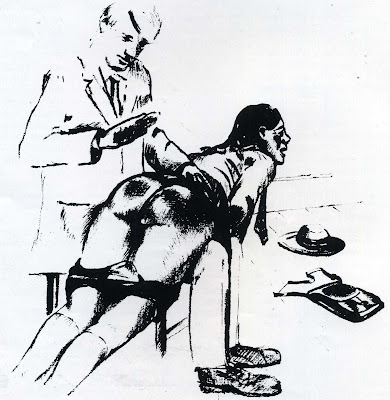 We start with the spanking — arguably the most common of punishments. The position our unfortunate young schoolgirl finds herself in is the well-known, often-used, ‘nursery-type’ position. The man sits well back in his chair, feet flat, balancing him. The girl lays across his thighs, supporting herself by grasping his left leg. Her knickers have been taken down to mid-thigh, and have, on their downward journey, been turned inside-out. Her thighs are pressed tightly together — she doesn’t want to show off any more of her charms than is absolutely necessary. Thus, her bottom-cheeks are clenched together. This, though, as any dedicated spanker knows, will not be the case after that large bottom of hers has received a few smacks; the cheeks will open and close as the stinging palm does its job.
The man’s hand has fallen about two-thirds of its journey (maybe, though, it is on its way back up before descending once more). The large expanse of flesh awaits its next visit from the punishing palm. It is quite obvious that the tender young buttocks have undergone a few smacks already. Were the illustration in colour, those greyish marks on the girl’s cheeks would be a bright scarlet.
There is a look of discomfort on the young lady’s face. Also, it is possible to detect an anxious look; a look that tells us she is not exactly looking forward to the next, inevitable, spank with much pleasure. The man eyes the reddening rear end carefully — ensuring that his aim is good, and taking in the sight of those once creamy-white cheeks turning pink, then crimson.
How strong is your imagination? Can you hear the howls, the pleas for mercy echoing around the room? Can you hear the sound of palm meeting bare bottom-flesh? And how many more smacks do you think will fall across that unprotected bottom? Will she have to stand in the corner afterwards, hands on head, bare bum on display? Maybe there will be a secondary punishment — the strap, possibly; or maybe the cane.
What do you think the wretched girl has done to deserve such treatment? Played truant? Caught smoking? Well, whatever it was, she is certainly paying for it now. The over-the-knee spanking — an efficient method of chastising that can never fail to bring about a feeling of abject humiliation in the mind of the miscreant…
----//---- 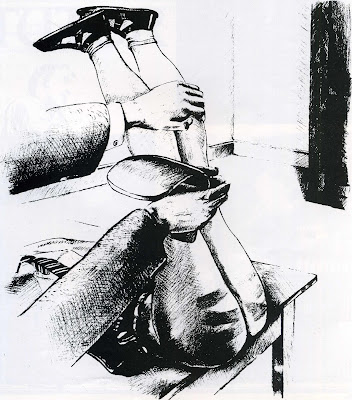 We continue with a less orthodox punishment. The implement being employed appears to be a sort of leather paddle — and a rather awesome object it looks too. The method being used here is one rarely seen. That is not to say, however, that it isn’t an efficient one. Laying on her back on the table, and with her legs up in the air, the girl offers a good deal of spankable flesh to her punisher. The centre and lower regions of her bottom are on display, as are the tender tops of her thighs. Her knickers have been taken off completely — either that or they are hiding behind the man’s hand. The chap doing the punishing has his left hand tightly around the girl’s calves, rendering movement and attempts at avoiding his ministrations virtually impossible.
That cheeky little bottom has received a few wallops already — as can be seen by the marks across it. The tops of her thighs, which, as any girl will tell you, are particularly tender, have been visited by that strip of leather too.
We can’t see the young lady’s face — which is a shame — but we can try to conjure up what kind of expression is on it. A pretty pained one, I’ll be bound! She is no doubt wriggling her sit-upon in an attempt to free herself and to try to rid it of the pain it’s experiencing. This, though, won’t do much good; that paddle will hurt just as much as if the girl were stock-still.
An unorthodox punishment, perhaps — but an effective one, nonetheless…
----//---- 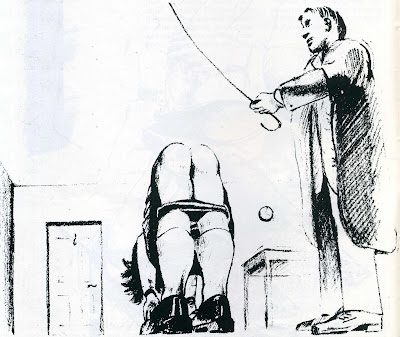 We close this month’s Gallery with a far more familiar chastisement. It is, as you can see, the cane. The young lady on the receiving end, on close inspection, can be seen to be touching her toes. Her skirt has ridden — or has been pushed — well out of the way. Her knickers have been taken down to her knees, just above the tops of her socks. In this position her bottom is thrust upwards and makes for a very easy target.
The girl’s hair hangs limply as her face points down, near to the floor. The cane, held firmly in the master’s hand, is in the process of swishing down towards the trembling flesh of the young girl’s bottom. It looks as if it has landed a couple of times as we look at the scene — one stroke on the crown of the backside; the other, lower down, near to her thigh-tops.
Our artist has given great attention to detail. See that clock on the wall? Five-past-four. School, then, has finished for the day. Not, though, for this girl. She’ll be late home tonight. Bet she doesn’t sit down on the bus. Supposing a gentleman offers her his seat? She’ll have to turn down his act of courtesy. She won’t be able to eat her tea standing ,up, though. And so, as she lowers her sore backside onto the dining-chair, she’ll be biting her lip in anticipation of what will be a painful reminder (as if she needed one) of her caning.
Perhaps her parents will notice her wince as bottom meets seat Perhaps they’ll note the look of pain on her face, her squirming, as she tries in vain to get herself comfortable. They’ll surely want to know why she’s shifting about so irritably. And, of course, she’ll have to tell them in the end. Will mummy and daddy want to inspect her marks? Will her brothers and sisters tease her? Will, for being naughty at school and not informing her parents about it until prodded into it, the poor, unfortunate girl have to undergo further, parental, chastisement?
The caning, bending over touching toes. A familiar punishment to Roué readers — and, arguably, the most efficacious…
Posted by Fleas63 at 06:00