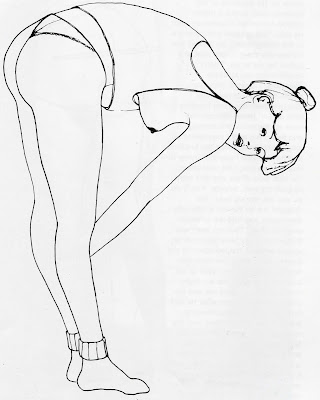 It’s always the same when Uncle Oliver punishes me. Whatever I happen to be wearing I am made to go to my room and change into these silly clothes. He bought them a year or so ago. The knickers are the skimpiest pair he could get hold of and as you can see afford me very little in the way of protection when I have bent over. They cut right into my bum so that my poor sit-upon is almost completely bare. The vest has ridiculously large arm-holes, thanks to a nifty bit of alteration by Uncle. This, as you can see, was done so that when yours truly is in the correct position yours truly’s boobs hang out. He likes boobs does Uncle Oliver though he quite clearly prefers bottoms — mine especially. I have to stand there like that for simply ages while he sits and makes comments on my appearance. ‘You are growing into a big girl now, Tina,’ he’ll say or: ‘What a fine young bottom you have, Tina.’ I blush like crazy and my tummy is in a turmoil as I await the inevitable punishment.
After his appraisal of my charms he picks up his old carpet slipper and, as he approaches me, passes sentence. ‘Ten strokes, Tina,’ is the usual though for extreme naughtiness he’ll give me anything up to two dozen. Throughout the chastisement I feel those silly knickers cutting into me more and more. By the time he has finished they have practically disappeared into the crevice of my stinging bum.
‘Up you get, Tina,’ he’ll say and then pull me to him for a reassuring hug, his hands going to my bum and tenderly rubbing the pain away. Then I go up to my room and change into my proper gear, being very careful when pulling my knickers up over my bottom.
I then go back down to find that Uncle Oliver has transformed once again into plain Oliver, my husband of three months whilst I revert back from his naughty niece into adoring young wife. I must say I prefer Oliver to Uncle Oliver but, from time to time, quite enjoy being a naughty niece — just like I was years ago when real Uncle Harry used to spank my bare bum in his den when Auntie Brenda was out at bingo. 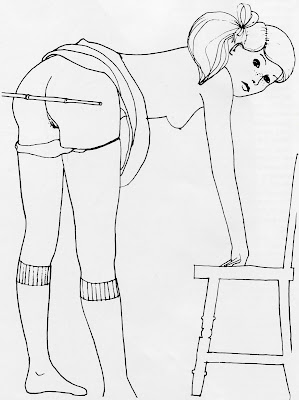 I was only experimenting with it. Helen lent it to me the day before. Sorry, ‘it’ is one of those funny little things, made of plastic, about eight inches in length, rounded at one end and with batteries in the other end. I had just got back from school and was dying to try it out. There hadn’t been an opportunity the previous day as mum and dad were in all evening. When I got home, though, the house was empty and I dashed up the stairs to my room and stripped right off. I lay on my bed and picked it up. Then I pushed it a little way inside me and flicked the switch on. Wow! — was it lovely or what? Then, being miles away, it became apparent that I hadn’t heard dad come in. He appeared in the doorway and, to put it mildly, looked somewhat shocked at what he saw.
‘Get dressed and meet me in the sitting-room,’ he barked and I threw the thing to one side and pulled my socks on. Then I couldn’t find my knickers. Eventually I located them underneath the bed and hurriedly dragged them on. Then I put my skirt on and heard dad coming back up the stairs. He stormed in and asked me why I was taking so long. I explained about the knickers and he said that I was just trying to buy time so that he’d cool down.
He took hold of my arm as I went to grab my vest, saying: ‘You’ll do as you are, young lady.’ He dragged me by the ear all the way downstairs and told me to bend over the chair. Then my skirt was thrown onto my bare back and my school knickers hauled down to the tops of my thighs. The cane was fetched and I shut my eyes as he swished it through the air.
Eight awful strokes he gave me and my bottom hurt like crazy after he had finished. Then I was ordered to stand in the corner facing into the room with my hands on my head. My boobies were on full display and I was very, very embarrassed and positively dying to rub my poor bum-cheeks.
I’ll never play with one of those things again, I can tell you! I returned it to that bloody Helen the very next day. I told her what had happened and she just laughed, the cow. She even told me to drop my knickers in the toilets so that she could see the marks but I wasn’t having any of that. She did, though, get a brief glimpse of my bum when we were changing for netball the next day — as did half the class and Miss James, the PT teacher.
‘How did you get those, Mary?’ she asked. I told her that dad caned me but I didn’t let on why. I wasn’t having her know about that funny little plastic thing, now was I?
Posted by Fleas63 at 06:00