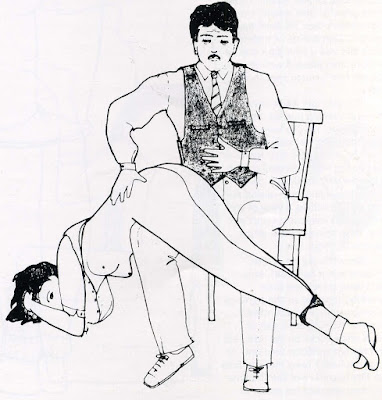 As godfather to young Caroline, Gerald Lawson had been called upon to perform many duties in the seventeen years since she came into the world. One duty, though, that he could have had no idea of being called upon to perform when Caroline’s parents first asked him to be the child’s godfather was that of chastising the girl.
Caroline’s father’s job took him abroad for roughly a quarter of the year and, six months ago, when he flew off to West Germany for a conference, Gerald received a telephone call from a rather distraught friend. It was Mary, Caroline’s mother. Apparently the girl had been playing up a lot at home and Mary simply couldn’t cope.
‘Of course,’ explained the woman, ‘if her father were here she’d get a damn good hiding. You wouldn’t consider standing in for Jack, would you, Gerald?’
Within ten minutes Gerald’s car was parked outside Mary’s house and the girl was across the man’s knee, getting the seat of her knickers warmed.
Many such incidents had since occurred; Caroline was such a naughty child. Gerald had just got home from work when the telephone rang. It was Mary.
‘So sorry to bother you again, Gerald, dear,’ said the woman, ‘but Caroline has been up to her tricks again. She swore at me and when I slapped her face she struck me. Would you mind terribly…’
Think nothing of it, my dear,’ interjected Gerald, ‘I’ll be round right away.’
Mary received him at the door. ‘It’s so good of you, Gerald,’ she said, taking his coat and scarf. ‘I really shouldn’t trouble you in this way.’
‘Don’t fret, Mary,’ he smiled. ‘Always glad to be of service. Now, where is the naughty young thing?’
Mary showed him through to the lounge. Caroline was sitting on the sofa, looking none too happy. Gerald gave her his usual little lecture and then seated himself on a chair, telling the girl to get herself over his lap.
Reluctantly she obeyed. He tugged her skirt down and off, throwing it to one side. He then yanked her flimsy panties down her legs so that they hung just above her little white ankle socks.
Her blouse, after all this movement, had fallen down towards her shoulders, baring her small breasts. She was practically naked, but the only naked area that Gerald was interested in was her bottom — pale pink over his knee, almost crying out for attention.
It wasn’t long before Caroline was crying out. The spanking began in earnest. Mary looked on with admiration, and wondered as she often wondered, ever since the first time he had spanked her daughter, how could Gerald be so expert at this sort of thing when he had never had children of his own?
Caroline was over his lap for a full five minutes, receiving smacks at roughly ten-second intervals. Afterwards, she was told to rise, and she ran from the room crying, nearly tripping over her pants as she went.
‘Thank you so much, Gerald,’ the girl’s mother said as he made for the door. ‘Don’t rush off yet. There’s another little favour I have to ask of you.’
‘Oh… and what would that be?’ he asked.
‘Well, it’s like this,’ she explained. ‘like you, I firmly believe that all naughty girls should be spanked… and… well, you see, I did a rather naughty thing today. Sort of had a little accident with the car and an oncoming lamp post… and I wondered if you would…’
----//----

‘Humiliation,’ Barbara’s mother was always saying, ‘is an essential part of any punishment.’ And she practised what she preached — as Barbara knew to her cost on many an occasion. That is why the girl finds herself in the predicament she’s in now. Always, before any punishment, she is made to stand at the chair she is to be bent over, with her bottom bared. This, of course, isn’t too awful if just her mother is present. Today, however, is somewhat different.
It is the occasion of her younger brother’s birthday, and her sixteen-year-old charms are on display to no fewer than nine people. Present are her mother, father, Grandad Jim, Grandma Betty, her two brothers, Andy and Keith, her cousin Lucy, her Aunt Jenny and Uncle Harry.
The throng look on appreciatively — especially old Grandpa Jim, who is seeing before him more female flesh than he has had the pleasure of seeing for some ten years. And young female flesh it is too!
Barbara’s trembling buttocks were being studied by no less than nine greedy pairs of eyes — some of them greedier than others. Uncle Harry hasn’t seen his favourite niece in such a state of undress since she was a little girl — and he is more than pleased with the way the girl has matured over those years.
The poor girl waits, aware of the eyes burning into her bottom. She does her best to keep her thighs together as close as possible, but knows only too well that during the impending punishment she will, as always, be flailing her legs about — giving the assembled relatives a view of the parts of her she would rather no-one (with the exception of her boyfriend, Pete) saw.
Her white cotton school knickers are at half-mast, around her knees, which she feels knocking together as she trembles in anticipation. Her only other items of clothing are a pair of white ankle socks on her little feet and her white cotton teen-bra. At least she hasn’t been made to bare her tiny breasts. Not like the time her mum spanked her round at Uncle Alf’s. On that occasion she was made to take off everything before going over her mother’s lap. How she hated Uncle Alf seeing her like that — her little titties swinging as the smacks fell on her poor bum.
Mum was approaching Barbara now. She had the belt in her hand — Dad’s thick, leather army belt. She had been hoping it would just be the slipper. It was not her day…
----//---- 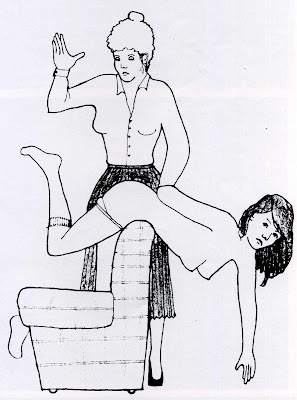 I always look forward to my stays at Aunt Lisa’s. She spoils me something rotten. Mum says it had something to do with the fact that she never had any kids of her own. From the moment I arrive to the day I leave to go back home she treats me to all sorts of goodies. Trips to the theatre, restaurants, classy clothes shops. It’s great.
There is, however, a drawback. There always is, I suppose. You see, Aunt Lisa, while being very generous and kind, is very strict and has very old-fashioned ideas about disciplining children. She stands for no misbehaviour.
The other day when I called on her she took me to see a show in the West End. Then we went on to a smashing restaurant before going back to her house. We were just about to turn in for the night. I was in the bathroom having a crafty fag. I should have locked the door, I know, so it was my own stupid fault. She burst in and found me sitting on the edge of the bath half-naked, puffing away on my cigarette. Boy, was she mad?
‘Get yourself downstairs,’ she roared, and snatched the fag from my hand. She followed me downstairs — me in just my socks and knicks, and pushed me into the lounge. ‘Just you wait, my girl,’ she said, ‘I’ll make you pay.’
And did she? You bet! She pulled an armchair into the centre of the room and flung me over it. Then, down came my knickers (Aunt Lisa always spanks on the bare) and the hiding began. Ten minutes it lasted and was my bottom sore by the time she finished! She just kept on whacking. Her hand can really hurt, I can tell you. Smack, smack, smack. I thought it would never end. I wriggled about but she had a firm hold on my arm and I just couldn’t avoid any of the slaps. They got harder, too, as the spanking continued. My poor little bum was burning like crazy by the end.
When she did finally stop, she made me stand up and go to one of the corners of the room and put my hands on my head. I wasn’t allowed to pull my knickers up and had to stand there, bright-red, throbbing bottom on display. She poured herself a drink (I suppose she needed one after all that effort — I wouldn’t have said no to one myself) and she sat down opposite me.
Eventually I was allowed to put my hands down, pull my knicks up and sit with her on the sofa. It hurt a bit, but the cool leather was rather nice on my hot bottie. She put a reassuring arm around my shoulders and said: ‘There, there — that wasn’t too bad, was it, Suzy?’ And I just said: ‘No, Aunty.’
Well, I suppose it wasn’t really. In any case a hiding from Aunt Lisa is always worth it — what with the otherwise smashing treatment that I get from her. Even when she uses the slipper it’s not all that awful.
I love Aunt Lisa, and I realise that she spanks me only because she cares about me. Some people would say that it is a strange way to show that you care, but I know she means well. I’m staying with her again next weekend. I know there will be the inevitable spanking or two, but she’s taking me to a fashion show on Saturday and she’s promised to buy me a dress. So it’s not all bad. I’ll arrive home on the Sunday night having had a great time, happily clutching the newest addition to my wardrobe, but I bet I’ll have something else as well. A freshly-spanked bottom. It’ll have been worth it, though.
Posted by Fleas63 at 14:00