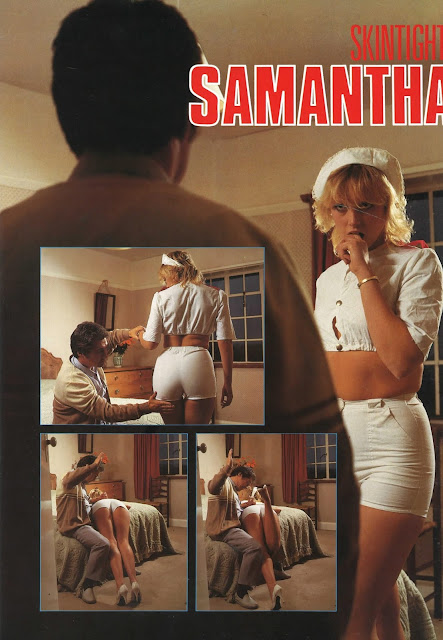 As a holiday job, Samantha had already discovered that the staff restaurant was quite a cushy number. Cushy enough, in fact, to encourage her to start taking liberties. First a little judicious overcharging — the blokes distracted by the tanned bare thighs emerging from her short uniform — deliberately selected, it has to be said, by its wearer.
It was a short step from overcharging those she didn’t care for, to not charging the full price to those who took her fancy. The twinkle in her eye as she tossed those blonde curls off her face appeared to pin some of the resort’s male staff to the floor — the implied promise of a small favour enough to set them salivating.
The uniform top was taut, too. Deliberately so. And the lack of a brassiere emphasised Samantha’s delicious form. She wasn’t perhaps a stunner, but she knew how to make the most of what she’d got. And she had plenty. The restaurant manager had put her on the till early on in the season, reasoning that he would get more work out of her that way than putting her behind the counter to serve meals. 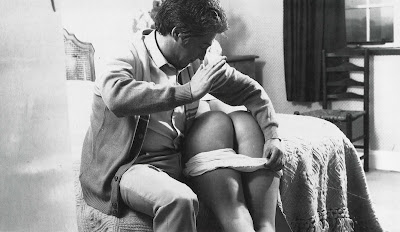 It took Derek a while longer than one might expect to cotton onto the fact that Samantha might not be one hundred per cent honest in her till declarations. It didn’t show in the stock check. She didn’t steal money. It was just the inconsistent pricing which he discovered as he unrolled the paper and scanned the column of figures.
A grim smile spread across his face. Picking up the ‘phone, he called the catering manageress: ‘Doreen? I’ve found some rather worrying discrepancies in the staff restaurant till receipts. Could you come over to have a word?’ Best to cover himself. He knew Doreen would back him up.
It didn’t take long to convince her that Samantha should be severely censured and given a final warning. The exact specification of ‘severely censured’ was left — quite clearly — to Derek. The next call was to Stephen, resort staff director. 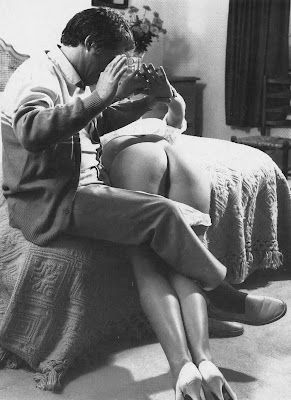 ‘Steve? I’ve nabbed that little blonde number on the tills doing a soft shoe shuffle with the old keys, according to who she’s serving. Sometimes overcharging, sometimes under. But she doesn’t seem to be nicking money, which is a bit strange. Could I come and see you?’
It was Steve who finally suggested that the answer might be a little ‘off-the-record’ punishment for Samantha, a concept of which Derek thoroughly approved.
‘She’s got to agree, of course, and sign a disclaimer, but I reckon we could provide that young lady with something to keep her warm for a few hours. A bloody good hiding is what she needs, especially with an arse like that. I’ve seen her undulating down the corridor in those skintight jeans. Haven’t you?’ 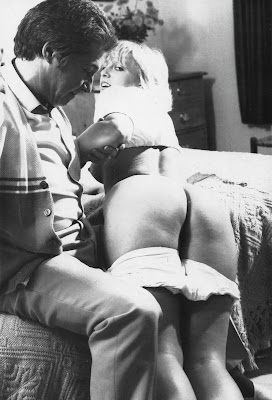 Derek had to admit he had noticed too: ‘Skintight Samantha, the boys call her!’ he laughed.
‘Well dear little Skintight is going to find out what it’s like to have a few layers peeled off, if things go how we want them to. Are you on?’ Steve smiled, as Derek nodded enthusiastically.
Samantha’s interview in Derek’s office later that evening was shorter than he would have liked. She admitted her offences at once. Just asked what would happen to her. Didn’t appear surprised to be offered the option of what Derek quaintly described as a ‘sound thrashing on your dishonest bottom,’ and after a moment’s hesitation agreed that it was her best option.
The time was set for 11 am, after breakfast the following morning, in Steve’s private apartment: ‘You’d better come appropriately dressed, Samantha,’ Derek suggested helpfully.
It should not have been a surprise, then, when the girl turned up at Steve’s door in her uniform, hair band, a cut-off serving top designed to be worn with a blouse underneath and an apron over, and the most snug-fitting pair of white cotton shorts Derek or Steve had ever seen. They appeared to be sprayed on, moulding themselves to every nuance of her delightful curves as she walked into the room. 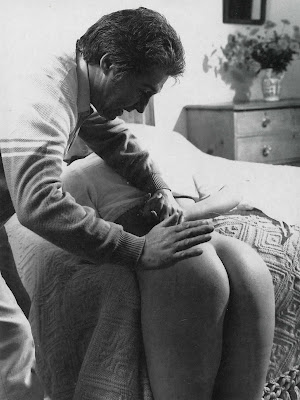 She noticed their eyes glued to the taut containing fabric: ‘Well, you said something appropriate, Mr Jewers! I guessed as I was going to get it on the bum I might as well wear something which fitted properly.’
She paused, slightly embarrassed, as the men said nothing.
‘I haven’t got knickers on under them, though. Is that all right?’
‘Absolutely fine, Samantha,’ confirmed Steve hurriedly, tearing his eyes away from the swell of her rump. ‘Go into the bedroom and wait there.’ He pointed to the far door, and they watched entranced as her buttocks softly undulated under their cotton skin. A skin which would peel off most satisfactorily.
‘Christ, what an arse!’ exclaimed Steve. ‘Pity we haven’t got a strap or a cane for it, really.’ 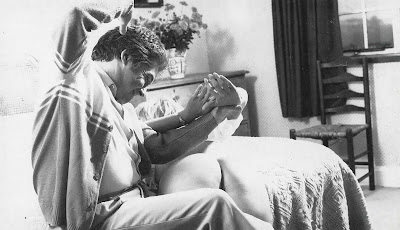 ‘But spanking her means the job will take that bit longer, Steve, and require a high degree of personal… er, contact.’ He grinned. ‘OK, you get to do this little minx. But I’m going to get a strap for the next girl.’
Together, they walked to the bedroom door, Steve closing it behind him as Derek crossed to the waiting girl. He noticed that the short elasticated top was secured by just three studs, and pondered on this fact for a moment.
‘Are you wearing a bra?’
‘No, Mr Jewers.’
‘I see. Have you been spanked before?’ A shake of the head. 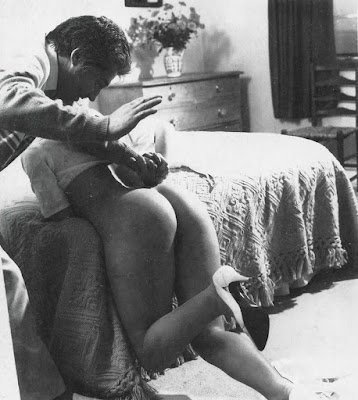 The process of getting Samantha lying satisfactorily across his left knee as he sat on the edge of the bed took Derek a pleasurable few minutes, until he decided she was correctly positioned. The cotton shorts were just that. Short, ending at the junction between thigh and buttock, the tanned legs stretching away to the white high heels now digging toe-first into the carpet.
Derek was a little surprised that she hadn’t even bothered to read the disclaimer form agreeing to be punished, signing it with a dismissive flourish as if her just desserts were of no interest. Had she read the few lines of type, she would have seen that the spanking would be administered ‘with a severity at the complete discretion of the punishing official, who may order the removal of some or all articles of clothing as appropriate.’
Frankly, thought Derek, she was apparently wearing only four articles of clothing in any case. Top, shorts, cap and shoes. He would see if he could reduce that number to one.
‘Hands behind your back, Samantha,’ he ordered, and she lowered her head onto the cover, sliding her hands round to where he could grip them in his left hand. The palm of his right hand, in preparation, was testing the softness of the target area. He slapped it lightly, and it barely quivered, contained as it was beneath its protecting sheen of stretched fabric. 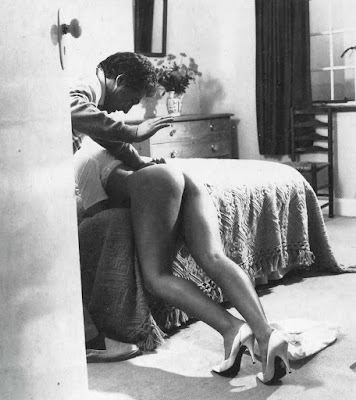 ‘Right, my girl,’ Derek warned, and brought his hand down with a resounding slap onto her right buttock. He was surprised at how much it stung his palm, and applied his attention in turn to her left cheek. Again, the sting in his palm seemed greater than it should: the effect, he concluded, of her shorts. And the fact that Samantha did not seem unduly perturbed by the assault on her rear-end made the decision swifter than it might have been.
‘Undo your shorts, they’re coming down.’ There was the beginning of a protest, but her hand went beneath and flicked the stud apart, tugged the zipper down, until the waistband was slack enough to permit the entry of Derek’s fingers and the downward passage of the material, baring those twin magnificent mounds for the first time. Neither man was surprised to notice the absence of a bikini line: Samantha struck one as the sort of girl who, if she didn’t sunbathe nude, certainly went into the solarium stark naked.
Derek pulled the shorts down clear of her cheeks, to rest obstinately at mid-thigh. The first smack on her now bare posterior was harder than before, and he was rewarded with a crisp Smacckkk! and a high yelp from the recumbent girl: ‘Oww!’
‘That’s better!’ acknowledged Steve.

Derek laid into the naked target with a will, the sharp explosive crack of flesh on flesh and the frantic wriggling of the recipient evidence of the effectiveness of his work.
Samantha’s leg kicked up suddenly, the heel of her shoe almost catching him a glancing blow on the temple. Swiftly, he crossed his free right leg over the backs of her thighs to secure further struggling while he continued the barrage of slaps, the smooth cream turning already to an angry red.
Samantha began to slide to the floor, and finally Derek allowed her to slump onto her knees.
‘Get up,’ he snapped, grabbing her wrists and pulling her forward over the steadying knee he had propped onto the bed.
‘Hands behind again.’ There was the pop of one, perhaps two studs in her top giving way under the strain of containing their freely suspended cargo. Her shorts now round her ankles, Samantha was in danger of stripping completely as the spanking continued remorselessly.
Steve could confirm the evidence of the exploding poppers as he glimpsed her swaying breasts, her head turned, craning to see if he was still watching. He was.
‘Over the end of the bed, Derek, I think’ he suggested.

‘Lie over the end,’ ordered Derek, his position decidedly uncomfortable with the girl struggling as she was. She slumped willingly onto the cover. He pinioned her wrists together and slapped first one red cheek, then the other, the smarting in his palm urging him on to additional chastisement as he appreciated how the spanking was now taking effect.
‘That’s bloody hurting!’ yelled Samantha in pointless protest. ‘That’s enough, for Christ’s sake!’
‘I’ll decide when it’s enough, my girl.’
Samantha rolled half onto her side and was rewarded with a sharp slap across the back of her thigh: ‘Owww!’
Struggling further up the bed, her rolling exposed first one perfectly proportioned breast, then the other, until she was all but naked. Derek, however, was not to be distracted from the task in hand and continued to apply the palm of his hand to spectacular effect, aiming at whatever expanse of thigh or bottom was most convenient as Samantha writhed across the coverlet.
Writhed quite erotically, Steve mused with a delighted smile. But the yells were getting a little too loud for comfort, despite his apartment’s distance from the main buildings. Time to draw proceedings to a close.
Derek, though, had managed to contain the slithering form and had her back over the end of the bed for a final burst of smacks which left her blubberingly subdued, kneeling on the carpet clasping her abused buttocks gingerly. 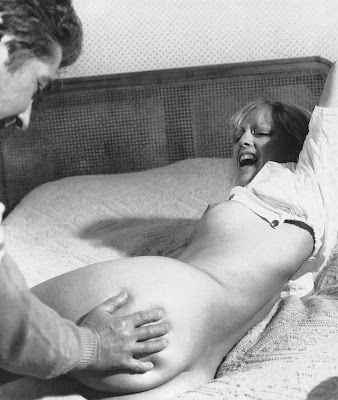 ‘You were right, Derek. A spanking does take a great deal longer and allows a great deal more physical contact than the strap!’
‘I’m bloody knackered,’ his friend admitted, the gleam of sweat across his face evidence if it were required of his sterling exertions.
‘Anything to say, Samantha?’ asked Steve softly.
‘It bloody well hurt!’ she repeated.
‘I thought that was the idea?’
‘But not that bloody hard. How am I supposed to work at lunchtime with a bruised bum?’
‘Oh that’s no problem. Derek’s rostered you off for the rest of the day,’ Steve laughed. ‘Plenty of time to recover!’
‘I suggest a cold bath, Samantha. Works wonders on sports injuries.’
‘Well, I’ve certainly been a bloody sport today,’ she mumbled bitterly, buttoning her top together and reaching for the shorts which would prove to be agonising in their replacement.
‘Yes, it was good sport,’ whispered Derek.
‘Next please,’ hissed Steve, barely suppressing a giggle. 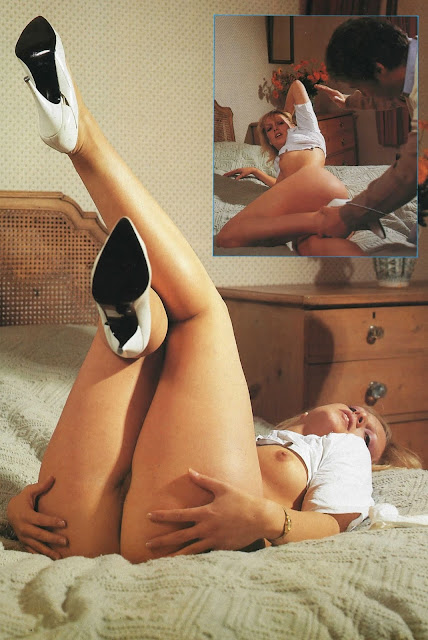