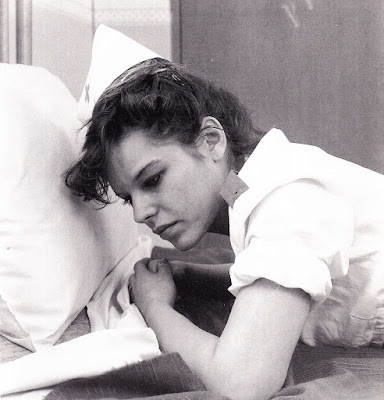 Another of the three applicants Mr Foulger had seen was an attractive blonde girl, full-lipped and pert, whom he had seen at the bus-stop on numerous occasions. Melanie Moorfield had always fancied herself as a bit of a star: she was pleasing to look at, and a leading light in the local operatic and dramatic society.
An object of lust by a large number of the society’s members, the svelte form of Miss Moorfield was much appreciated when she appeared in a society skit taking off the film Fame! wearing snug shorts and brief top. The shorts served only to emphasise her long legs and the fact that she did not bother with a bra.
At twenty, Melanie was only too aware of her effect on men, and used it to her advantage — and hers alone. With no long-term attachment, she ran a string of young suitors. None of them had ever managed a conquest, though there were many who claimed to have got over the final fence in the race to bed her.
At the interview, her reaction to the ‘corporal punishment’ information was a short and snapped: ‘You don’t honestly think I’m going to let you smack my bottom in the cause of some gratuitous fantasy scene, do you, Mr Foulger? I mean, it’s indecent!’ She had also refused to change into a leotard, but agreed to have a full length and head shot photograph taken. The tight jeans flattered her figure to great effect. Hers was a bottom, thought Mr Foulger, which would benefit more than most from a damn good hiding.
It was something of a surprise, therefore, when Melanie Moorfield called him at his home to ask if he would consider her for his documentary, ‘providing it’s discreetly done.’
‘Of course, of course,’ he smiled, not bothering to ask why she had changed her mind.
He was not sure if she would, after all, turn up the following Saturday as arranged. Jack, down especially for the event, had already sunk three large scotches when there was a firm knock at the door.
Mr Foulger stepped to one side as Melanie tripped in clutching a case: ‘You did say a nurse’s uniform, Mr Foulger?’ He nodded. ‘Oh good, my memory’s terrible if I don’t write things down. I brought some sports stuff as well, in case you needed to do some different shots. You know, shorts, tennis skirt, that sort of thing. I borrowed the uniform from a friend of mine: she’s got to have it back tomorrow, though.’
‘Ah, good, good.’
After introducing Jack (‘a professional colleague specialising in visual effects’), he asked her to change into shorts and top so that he could see if they were suitable. ‘Then we’ll pop over to the location: it’s only a mile or so.’
‘Oh. Location! That sounds glamorous!’ Melanie sounded genuinely excited.
----//---- 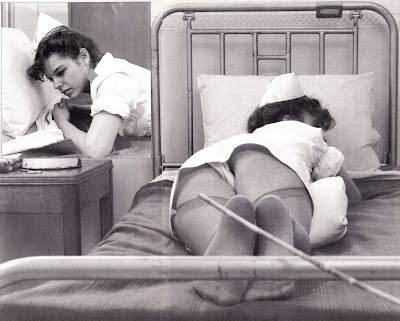 Melanie, as was her custom, did not bother with a brassiere, as both men appreciated when she entered the room.
‘Right, just stand by the window, would you?’ The tanned legs carried her across the room as both men’s eyes were fixed on the tautness of the shorts covering her twin half-moons.
‘Facing you?’
‘No, face the window… now turn 90 degrees left… now bend over.’
‘Touch my toes?’ Melanie giggled nervously.
‘If you wish.’
‘Is this how I’ll be whacked in the scene?’
‘Not absolutely decided yet. We must get going: don’t bother changing.’
The old isolation hospital was an ideal location, the afternoon sun providing adequate natural light, except in the corridors where redhead TV lights had been rigged in strategic doorways and behind glass panels through to the old wards.
‘When did they last use this place?’ Melanie asked nervously, ‘We’re not going to catch anything I hope!’
‘Hasn’t been used for three years, and the environmental health people cleared it ages ago. Now, you didn’t bring a leotard with you, did you Melanie?’
‘Yes. I think I did.’
‘Slip it on, would you?’
‘Where can I…?’
‘Change? Oh, through there,’ pointed Jack.
‘Why don’t we see if she’ll do the corridor bit?’ hissed Jack as Melanie shut the door. ‘You know, the tracking shot we talked about?’
‘I’ll ask her: worth a try!’
The leotard clung enticingly to every curve of her tantalising form, the full cheeks atop the firm thighs fighting to escape from the fabric, a thick wedge of bare flesh below the constricting elastic.
‘Just walk down the corridor. please Melanie,’ asked Mr Foulger, ‘down to the end and back again: I want to check a shot.’
The bouncing softness of the girl’s rump as it quivered away down the long pale cream corridor was a sight which brought a ready smile to both men’s faces.
Her short fair hair caught the sun as she walked slowly back towards them, breasts bouncing in perfect complement to buttocks. She smiled eagerly. Mr Foulger launched into his explanation: ‘We need to do a long-shot of the girl walking down the corridor, as seen by the consultant in the documentary. He’s fantasising about removing her clothes as she walks down the corridor, because he wants to dominate her, and punish her for imaginary offences.’
‘Very Freudian!’ chuckled Melanie.
‘So I’d like you to start walking in the nurse’s uniform, then you can ‘freeze’ while we change clothes before continuing the shot. OK? You can wear the leotard under the shorts and top, under the uniform. OK?’
‘Well…’
‘It’s shot from behind, so there’s no problem…’ explained Jack, omitting to mention the second video camera already set up and running in a ward at the far end of the corridor.
They busied themselves as the girl changed. The sun was perfect for the shot now, and Mr Foulger hurried her along: ‘Light’s perfect, Melanie: we need to get going…’
‘Coming…’ She stepped out. the red belt and red cross on the cap in startling contrast to the pristine white of the uniform. Mr Foulger explained the shot once more before she started off down the corridor: ‘Freeze!’ he shouted.
Jack trotted after her, and with a muttered ‘Excuse me’ unbuttoned the uniform and slipped it off, removed her hat, and gently pulled off shoes and tights, his hand brushing the warm softness of her thighs. Melanie carefully maintained her position, placing her now bare feet on the cool stone.
‘Action!’ yelled Mr Foulger, and she took another few steps in shorts and top before he told her to freeze again. Jack moved in and swiftly peeled off shorts and top to reveal the clinging leotard, the fabric seemingly bonded to the twin protuberances of that well-padded bottom.
Melanie started walking again on the command, until he shouted ‘Freeze! Melanie, a pity that leotard isn’t one of those high-cut skimpy ones, as… well, we need more flesh,’ Mr Foulger explained lamely. Jack was there in an instant: ‘We can ease the rear end up quite a bit, can’t we Melanie? I think that’ll do the trick.’
‘I guess so,’ she agreed, and Jack knelt down behind her. The adjustment was an enticing one, necessitating fitting his fingers into the leotard at the division between her legs — that warm, now slightly damp, division — and pulled the fabric up taut between the full, heavy cheeks to expose them almost entirely. He worked his hands a second time up the smooth warmness of her buttocks to fit the leotard more evenly into the deep crease between them.
He allowed himself an affectionate, flesh-quivering slap on the right pale orb as he bobbed out of shot and the call: ‘Action!’ came again. Melanie was now half way down the corridor, and Mr Foulger, delighted with the way things were going, stopped her and briskly strode down to speak quietly as Jack hovered out of earshot.
Passing Jack on the way back to the camera, he smiled: ‘Leotard off now, please Jack, for the final shot.’ Jack goggled unbelievingly, mouthing ‘Off?’ to Mr Foulger’s curt nod. All this unseen by Melanie, still facing down the corridor over thirty feet away. He needed no second bidding, as he faced her and pulled the garment off her shoulders and down past the firm bust to her waist. Onwards and downwards, the puff of hair revealed, his hands tugging the tight fabric from between her backside, his face close to her pubic triangle as she stepped carefully out to allow him to pick the leotard up.
Stark bollock naked, he thought to himself as he grinned widely at his friend behind the camera: and the whacking still to come!
----//---- 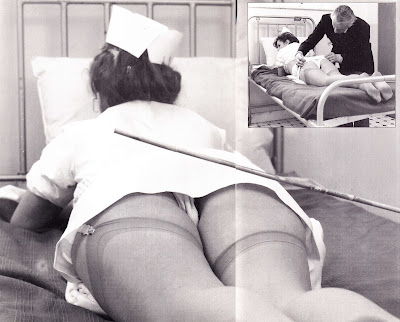 Back in the uniform, Melanie was making light of her first nude scene, and giggled: ‘Time for a good old-fashioned bum whacking now, is it?’
‘That’s right,’ Jack smiled, and nodded to Mr Foulger who had just come into the small ward, carrying a long slender cane.
‘Christ, is that the cane you’re going to use?’ asked Melanie anxiously.
‘Traditional school punishment implement: very effective,’ confirmed Mr Foulger.
‘Not too effective, I hope,’ Melanie responded.
Jack wheeled the bed across the chequered floor in front of the girl, and indicated that she was to kneel on it.
‘This the hospital version of the whipping block?’ she quipped, her voice more than a little nervous as she took her position. Jack fiddled with her skirt, white knickers exposed, tan stockings emphasising the paler flesh above them. The faint sheen of dampness on her thighs at the curve of her cheeks where they dived for the protection of her crotch.
‘Right, lie over the bed, on your tummy, Melanie,’ ordered Mr Foulger, resting the cane on the table by the jug where she could see it. ‘This bit will hurt, I’m afraid,’ he said with no trace of irony. Muscular yet soft, the twin cheeks invited chastisement in that position. And this young lady warranted it.
‘You’re going to get twelve strokes, Melanie,’ Mr Foulger intoned slowly, ‘And I want you to count each one out loud when you receive it. All right?’
‘Just not too hard, Mr Foulger: I’ve never even been spanked before.’
In her submissive posture over the bed, Melanie tensed her bottom in readiness for the onslaught. She felt Jack’s fingers at the waistband of her knickers, and shut her eyes as the pale target was presented.
Jack retired to the next room to watch the whole thing unfold on TV. It would have made peak viewing, and the moment when Melanie pushed herself up off the bed to rub feverishly at her wounded backside was one they would both savour for some time to come.
----//----
The envelope contained just £50. As they agreed with one another afterwards: ‘Outstanding value for money!’ 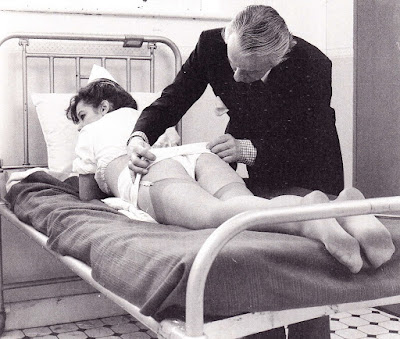