Another video, produced by Blushes and promoted extensively in Blushes magazine. Ranked by Spanking Film Review in their top five all time. 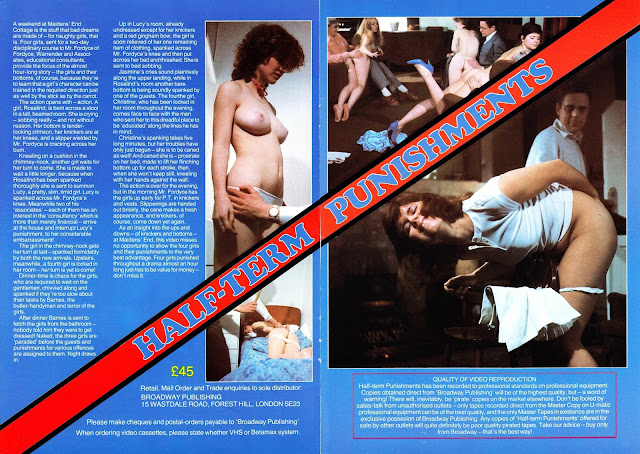 A weekend at Maidens’ End Cottage is the stuff that bad dreams are made of — for naughty girls, that is. Four girls, sent for a two-day disciplinary course to Mr Fordyce of Fordyce, Warrender and Associates, educational consultants, provide the focus of the almost hour-long story — the girls and their bottoms, of course, because they’re to learn that a girl’s character can be trained in the required direction just as well by the stick as by the carrot.
The action opens with — action. A girl, Rosalind, is bent across a stool in a tall, beamed room. She is crying — sobbing really — and not without reason. Her bottom is tender-looking crimson, her knickers are at her knees, and a slipper wielded by Mr Fordyce is cracking across her bum.
Kneeling on a cushion in the chimney-nook, another girl waits for her turn to come. She is made to wait a little longer, because when Rosalind has been spanked thoroughly she is sent to summon Lucy, a pretty, slim, timid girl. Lucy is spanked across Mr Fordyce’s knee. Meanwhile two of his ‘associates’ — each of them has an interest in the ‘consultancy’ which is more than merely financial — arrive at the house and interrupt Lucy’s punishment, to her considerable embarrassment!
The girl in the chimney-nook gets her turn at last —spanked formidably by both the new arrivals. Upstairs, meanwhile, a fourth girl is locked in her room — her turn is yet to come!
Dinner-time is chaos for the girls, who are required to wait on the gentlemen, chivvied along and spanked if they’re too slow about their tasks by Barnes, the butler/handyman and terror of the girls.
After dinner Barnes is sent to fetch the girls from the bathroom — nobody told him they were to get dressed! Naked, the three girls are ‘paraded’ before the guests and punishments for various offences are assigned to them. Night draws in.
Up in Lucy’s room, already undressed except for her knickers and a red gingham bow, the girl is soon relieved of her one remaining item of clothing, spanked across Mr Fordyce’s knee and then put across her bed and thrashed. She is sent to bed sobbing.
Jasmine’s cries sound plaintively along the upper landing, while in Rosalind’s room another bare bottom is being soundly spanked by one of the guests. The fourth girl, Christine, who has been locked in her room throughout the evening, comes face to face with the man who sent her to this dreadful place to be ‘educated’ along the lines he has in mind.
Christine’s spanking takes five long minutes, but her troubles have only just begun — she is to be caned as well! And caned she is— prostrate on her bed, made to lift her flinching bottom up for each stroke, then, when she won’t keep still, kneeling with her hands against the wall.
The action is over for the evening, but in the morning Mr Fordyce has the girls up early for P.T. in knickers and vests. Slipperings are handed out briskly, the cane makes a fresh appearance, and knickers, of course, come down yet again.
As an insight into the ups and downs — of knickers and bottoms — at Maidens’ End, this video misses no opportunity to show the four girls and their punishments to the very best advantage. Four girls punished throughout a drama almost an hour long just has to be value for money — don’t miss it. 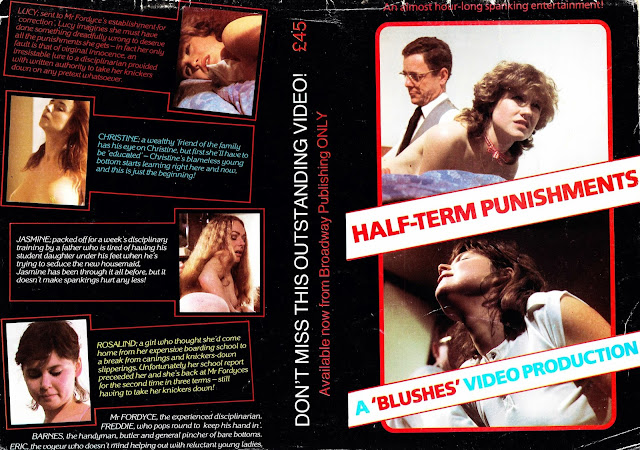 LUCY: sent to Mr Fordyce’s establishment for ‘correction’, Lucy imagines she must have done something dreadfully wrong to deserve all the punishments she gets — in fact her only fault is that of virginal innocence, an irresistible lure to a disciplinarian provided with written authority to take her knickers down on any pretext whatsoever.
CHRISTINE: a wealthy friend of the family has his eye on Christine, but first she’ll have to be ‘educated’ — Christine’s blameless young bottom starts learning right here and now, and this is just the beginning!
JASMINE: packed off for a week’s disciplinary training by a father who is tired of having his student daughter under his feet when he’s trying to seduce the new housemaid, Jasmine has been through it all before, but it doesn’t make spankings hurt any less!
ROSALIND: a girl who thought she’d come home from her expensive boarding school to a break from canings and knickers-down slipperings. Unfortunately her school report preceded her and she’s back at Mr Fordyce’s for the second time in three terms — still having to take her knickers down!
MR FORDYCE, the experienced disciplinarian.
FREDDIE, who pops round to keep his hand in.
BARNES, the handyman, butler and general pincher of bare bottoms.
ERIC, the voyeur who doesn’t mind helping out with reluctant young ladies.