From Blushes 17, continued from The Games Mistress and The Games. 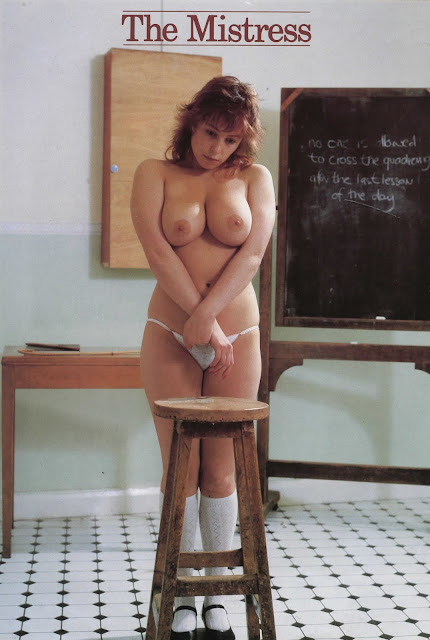 ‘What’s it like this Kingswood School?’ asked Kevin. He had met Christine at the station and it was naturally his first question after some enthusiastic kissing. ‘And why this last minute change of plans?’ Because it was Saturday lunchtime and Christine had originally been planning to come on Friday evening.
‘I did tell you on the phone, Kevin. It’s not easy, everyone wanting to go off for the weekend and so… I almost couldn’t come at all.’
Christine had been all set to leave on Friday evening but then at the last minute Mr Dowling had changed his mind, said there wouldn’t be enough staff for the weekend. It had only been an excuse of course, to get her to… 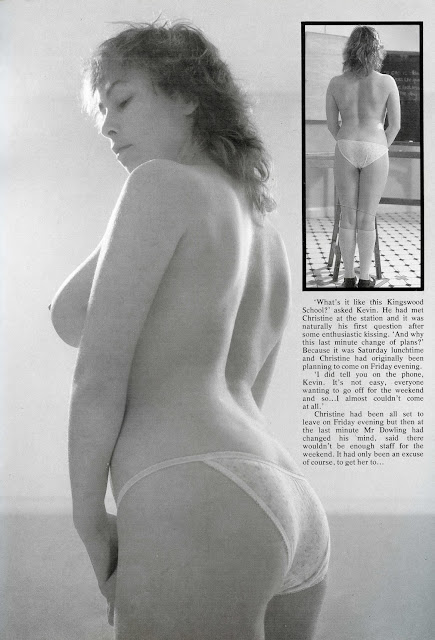 ‘Don’t Kevin, please please…’ Christine said distractedly, pushing his hand away from her leg. ‘You can’t drive and do that at the same time.’
‘What’s the Head like?’ asked Kevin reluctantly putting two hands on the steering wheel. ‘At least it’s a man. Does he fancy girls with big things?’
Christine said weakly, ‘Don’t be silly, Kev.’
It had all started just before tea. Christine was going to catch the train right after tea supervision but there suddenly was Mr Dowling’s head poking round the door as she was packing her suitcase. 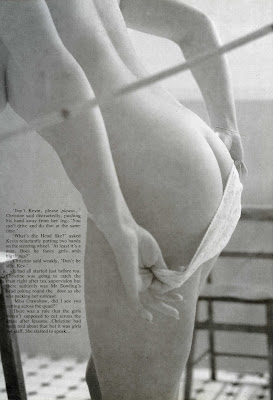 ‘Miss Crawshaw, did I see you cutting across the quad?’
There was a rule that the girls weren’t supposed to cut across the grass after lessons. Christine had been told about that but it was girls not staff. She started to speak…
‘You know in this probationary period, Miss Crawshaw, I am hoping you will set an especially good example to the girls and so I think you could do better than this. And there is the matter of this weekend pass. I don’t really see that you should expect it on your very first weekend. No, I don’t see that you can…’ 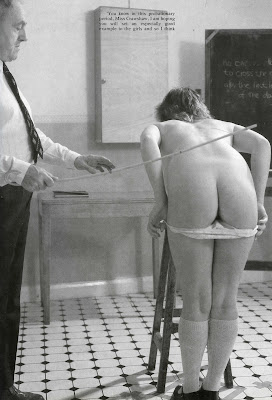 ‘But sir…’ Christine blurted. He had said she could and all her plans were made, a nice weekend with Kevin after a week which had had its traumatic moments — not least in connection with Mr Dowling.
The Head had given her an owlish look. ‘Why don’t we step along to Room 4C. Then we can discuss it.’
And so very shortly Christine was once more in dreadful Room 4C with the Head locking the door behind them. On nervous legs she stood and watched as he took a piece of chalk and went to the blackboard. He couldn’t keep her in for the weekend, he just couldn’t… 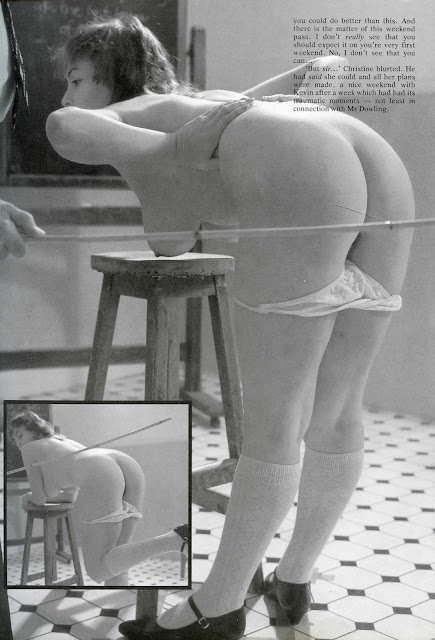 No one is allowed to cross the quad after the last lesson of the day.
Having carefully written this statement Mr Dowling turned and put down the chalk. ‘When a girl is guilty of this offence, Miss Crawshaw, I write it out for her nice and clear like this. Then I take her knickers down and give her one stroke of the cane for each word. It is a most effective way of getting the message across.’
Christine blanched. Idiotically her mind wanted to count the words. ‘No,’ she breathed. ‘Please Sir… please Mr Dowling…’ 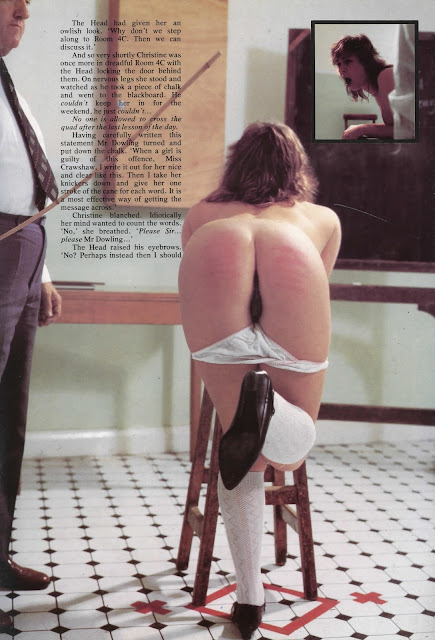 The Head raised his eyebrows. ‘No? Perhaps instead then I should keep you gated for the weekend.’
‘No!’ she squealed sharply. ‘No sir. Please!’
He gave a fiendish little smirk. ‘Looking forward to indulging in a certain activity, eh Miss Crawshaw? A vigorous young man reaching deep inside to those exquisitely sensitive regions. Is that it?’
What could you answer to something as dreadful as that? The fact that it was true made it even worse.
‘If you want a weekend pass, Miss Crawshaw, I suggest you take off your clothes right now.’ As she looked, feeling sick, Mr Dowling added, ‘Yes, all of them.’ 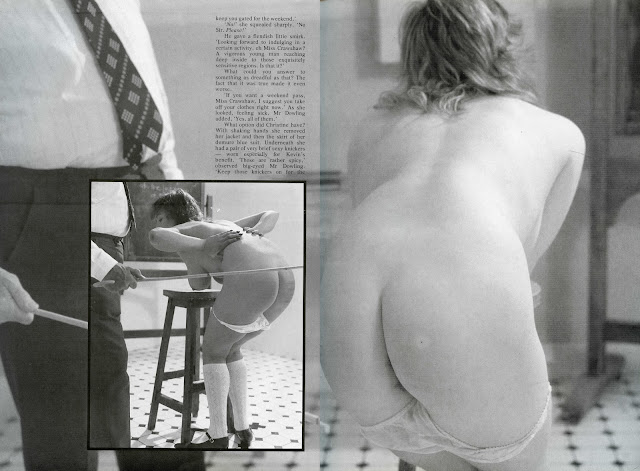 What option did Christine have? With shaking hands she removed her jacket and then the skirt of her demure blue suit. Underneath she had a pair of very brief sexy knickers — worn especially for Kevin’s benefit. ‘Those are rather spicy,’ observed big-eyed Mr Dowling. ‘Keep those knickers on for the moment. But let’s have the rest off.’
‘The rest’ comprised her white blouse and the white bra Christine had on underneath (worn because she had not dreamt she would be going to Room 4C) plus her black shoes. Mr Dowling eyed hungrily what was revealed, then strode over to get his cane. 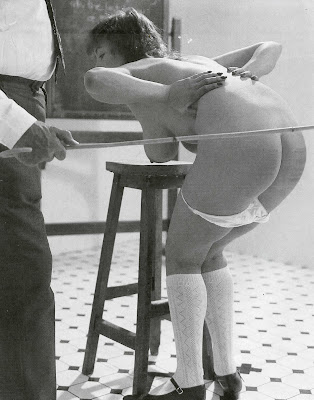 He bent Christine over the little table and slid the sexy knickers down himself. Then that dreadful cane.
‘Aaaoooowwwwhhh!’
There were 15 words in the Head’s chalked message. After each stroke he went over and ticked another word off. Fifteen words; 15 stinging strokes of that diabolical cane.
Christine could hardly stand up straight when it was over. 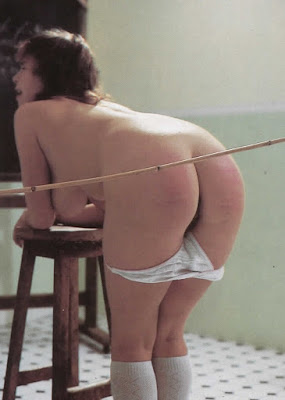 Afterwards he said, ‘Get dressed and then come to my room for a cup of tea.’ Hardly able to speak, Christine stammered that she was due to do tea supervision and then had to catch the train.
‘Someone else can do that duty,’ Mr Dowling told her.
And after tea…
‘We were suddenly short of a member of staff,’ Christine told Kevin.
‘This other person’s mother was taken ill so she had to go and so… The Head said could I just stay for the one night and then I could go on Saturday morning. Well, I couldn’t really refuse.’
No, you couldn’t really refuse your Headmaster, not when you were on probation and you wanted to keep your job and the Headmaster more or less insisted… Christine hadn’t realised what he had meant at first. He wanted to get to know her better, Mr Dowling had said, and at first she hadn’t realised just what… Well, you wouldn’t think that. Mr Dowling must be 60 and Christine had thought merely interested in big boobs plus also spanking and caning. But not… the other…
But actually he was extremely… Because who would think, at that age, not once but twice in the one night. Twice. Mr Dowling. Reaching deep inside to those exquisitely sensitive parts…
‘You haven’t said what he’s like,’ said Kevin. ‘That old Headmaster.’
‘Oh well…’ said Christine weakly. ‘Uh… well, very vigorous, I suppose you could say…’ 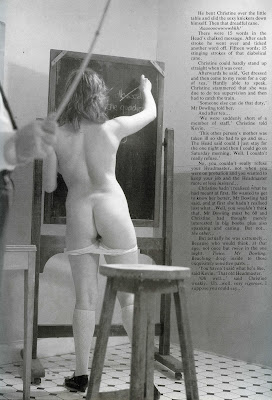