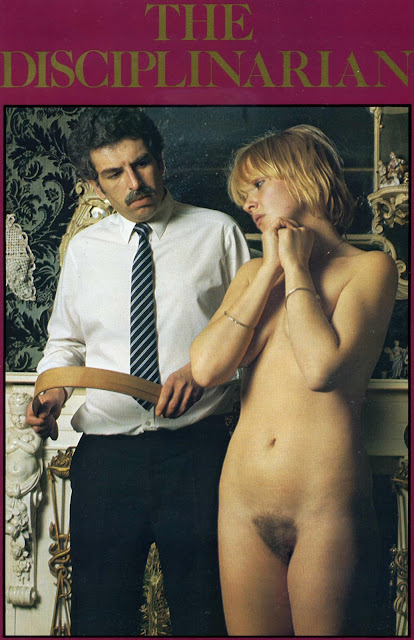 No-one could have foreseen The Disciplinarian — not even appreciative readers who have expressed delight over recent issues of the reborn Janus magazine. The Disciplinarian is so far ahead of all previous CP videos that there can be no meaningful comparison. It is not simply better: more inspired, more poignant and more severe — it is in a class of its own, the first of a new kind of corporal punishment video, the foundation of a transformed genre.
Produced by the Janus editorial team at the same high level of creative excellence and with the same profound insight into the subject that irradiates this magazine, The Disciplinarian is a brilliant television drama played out on a psychological knife-edge behind the impenetrable walls of an immensely strict finishing academy for girls… the daughters of wealthy upper-class parents with traditionalist views on education and character formation.
The video deals in an intense and powerful manner with a crisis which arises at the Academy — a breakdown of the disciplinary process as applied to one girl student, the absolutely delectable Antonia du Bois… together with the radical remedies adopted by the Director of the Academy, Dr N.Z. Weltscheim, to rectify the situation and bring Antonia back to heel. 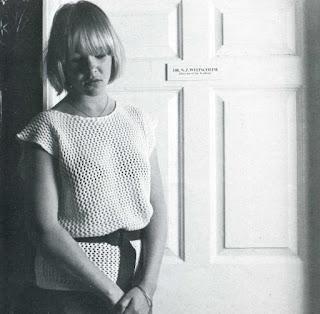 Dr Weltscheim, the world-renowned German authoritarian educationalist presides with godlike power over his remote and exclusive establishment for English and European girls, run on pre-war Teutonic lines updated but certainly not softened for modern times. Dr Weltscheim, who explains that many of his pupils never meet him personally throughout the whole of their stay at his establishment, takes the drastic decision to deal with Antonia du Bois himself after receiving a memo from the Academy Punishment Officer Mr McTaggart informing him that Antonia has had to be given more than three times as many punishments as any other girl since the beginning of term.

‘I am dismayed by your punishment record, Antonia du Bois!’ he tells her in his frightening foreign accent. ‘What a shocking catalogue of insolence, impertinence, insubordination and atrocious misbehaviour! But the most appalling aspect to your case, Antonia, is the manner in which Mr McTaggart informs me you took your last punishment from him. Our Punishment Officer tells me that you were extremely cheeky to him whilst he was disciplining you, that you made eyes at him during your nude humiliation, that you smiled at him whilst being given twelve strokes of the cane, and afterwards suggested that he wasn’t strong enough to hurt you… 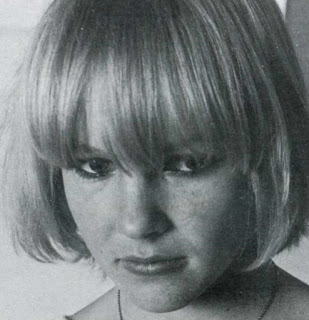 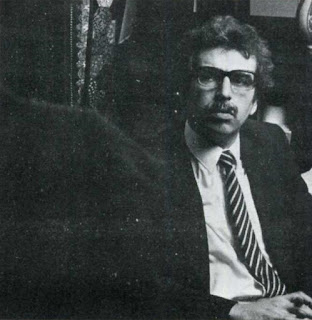 The Director’s vast experience and penetrating discernment enable him to perceive that Antonia has what he terms ‘an unhealthy desire’ to be punished and that she is going out of her way to break the rigid and restrictive rules and cheeking her superiors in order to gratify these perverted instincts. Under his skilful questioning she admits, ‘I used to hate being caned sir, but well, you must agree… it’s a bit naughty, it’s sexy being caned on the bare bottom by a man.’ 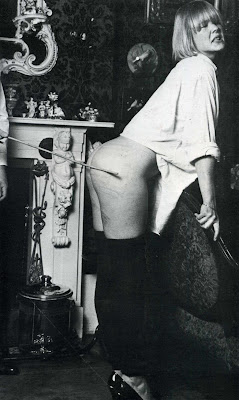 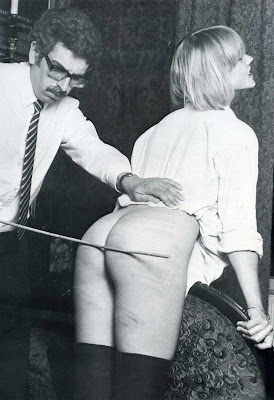 ‘Antonia du Bois! That’s a horrifying thing to say! You are a perverted girl, and we will have to straighten you out,’ he berates the bewitchingly beautiful pupil. ‘I know how to cure you,’ he continues relentlessly in his astonishing accent, ‘…by taking you further into physical and mental suffering than you ever dreamed possible. I am going to give you a series of evening aversion treatments — aversion to corporal punishment Antonia. I am going to teach you to hate the cane, the strap and all the embarrassment and shame they involve. These treatments will be off the record and completely secret between us Antonia…’ 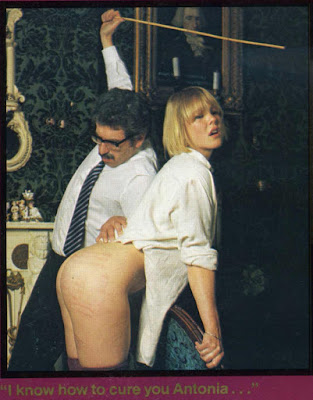 As indeed they will need to be, for even under conditions of the strictest discipline there are certain forms of punishment and correction that are more pleasurably imposed in total privacy and secrecy.
Antonia’s treatments start the same evening at 9pm and we’re not going to spoil your enjoyment by giving you a blow by blow account of the exquisitely erotic proceedings. Suffice it to say that Antonia du Bois must be the most attractive and delicious, sensitive and articulate punishee ever to be captured on film or video. As the drama deepens and intensifies, Dr Weitscheim’s character becomes clearer and we see him for the hypocritical fanatic that he is. Whilst verbally punishing Antonia for having been caught smoking a cigarette since their interview earlier that day — and before he canes her for this ‘most serious offence against college rules’ — the Director enjoys a luxurious smoke through his black cigarette holder.
The terrifying disciplinarian takes the trembling girl to the room where he administers his ‘special punishments’ and there makes her bend bare-bottomed over the sofa to receive eight strokes for smoking — ‘a piffling preliminary to your main discipline, Antonia du Bois!’ The viewer now receives two severe shocks. First, the sight of Antonia’s postured bottom — a marvel among female posteriors. And then the caning itself: eight viciously whistling strokes applied by Dr Weltscheim with all his strength to Antonia’s bottom and thighs, the latter strokes evidently causing her unspeakable agonies. 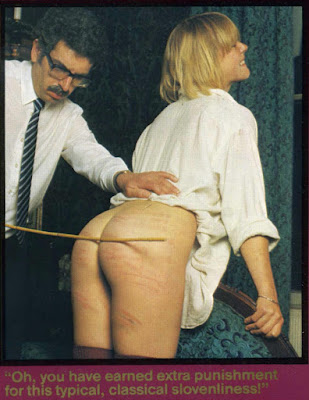 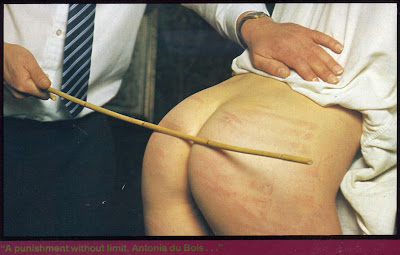 This prelude disposed of, the Director immediately orders Antonia to strip and for the remainder of the video she is drilled and disciplined wearing only a pair of woollen leg-warmers to tickle his kinky fancy. In an incredibly erotic sequence the Director of the Academy now makes the almost naked girl bend and touch her toes and stand up and stretch with her hands on her head then bend again, over and over again — and each time Antonia touches her toes he thrashes her already blazing bottom with a heavy grade three-tailed tawse. This severe discipline is augmented by the Director’s astounding and ferocious language as he hurls reprimand after reprimand at the sobbing, whimpering, bending and stretching girl, fulfilling his earlier promise to make her feel more embarrassed than she has ever been in her life. 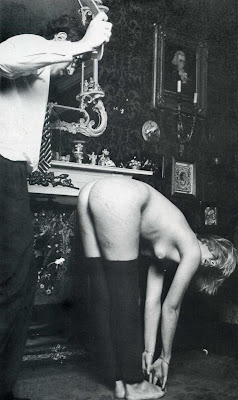 ‘How dare you be so insolent! How dare you be so impertinent! How dare you be so disobedient!’ Dr Weltscheim screams in a fine disciplinary rage. As Antonia bends for more of the same, her bottom in close-up looks as though it has been through a battlefield, and the girl’s plaintive reactions to the savagely wielded strap will move all but the hardest-hearted to take pity on her plight. The Director, however, has no such feelings and is determined to reform Antonia by means of ‘Good German discipline’ — which includes punishment PT. 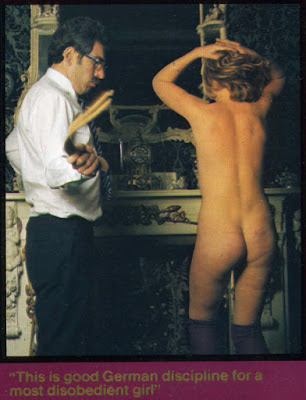 At the conclusion of her toe-touching strapping Antonia is compelled to run on the spot while Dr Weltscheim lapses into his native language in his corrective frenzy and whacks his angelic victim across her pounding thighs, producing further cries. And when she is totally exhausted, the Director gloats over her suffering. 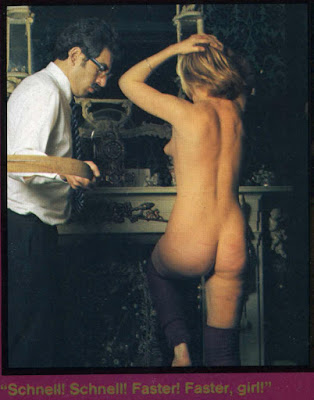 The viewer had already been projected into a new dimension of CP experience, far more severe and convincing than in previous videos. Each moment is one of breathtaking excitement — but the last section of the video, in which Antonia has to stand nude from her thighs up, hands on her head for interrogation will simply blow you away. The beautiful vision of the well-punished Antonia pleading to be spared further punishment is literally haunting. And only now do we begin to discover just how terrible it is for a girl as attractive as Antonia to be incarcerated at Dr Weltscheim’s finishing academy. 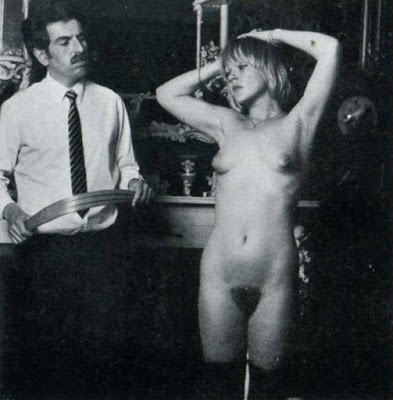 ‘Oh please sir. No more, sir! No more punishment,’ Antonia begs. ‘My legs and my bottom really sting, sir. Oh please let me off sir…’
At which the Director explodes: ‘Absolute balderdash, Antonia du Bois! I think you’re enjoying this, girl! Tell me the truth girl!!!’
True to her character Antonia answers: ‘I think you’re enjoying it, sir!’ and then bites her lip in horror at what she has said. 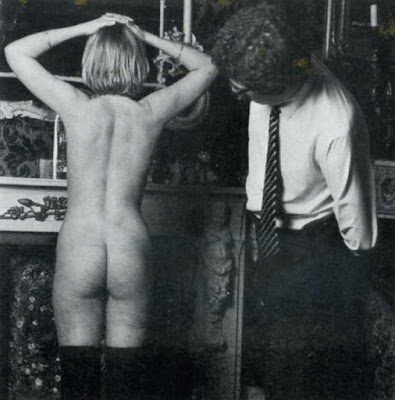 The Director’s fortissimo Germanic response simply cannot be conveyed on paper… without burning holes through the page.
‘Now that, Antonia du Bois, is the most disgraceful thing I have ever heard any girl say in my life!’ Dr Weltscheim expostulates in total disbelief. ‘It is a diabolical lie Antonia!! It is my duty to correct you, to punish this appalling error out of your wanton and wicked mind! All of your punishments are for your atrocious brand of insolence and cheek — and now I am morally compelled to give you twelve strokes of the crop for what you have said! Yes Antonia, my riding whip!’ 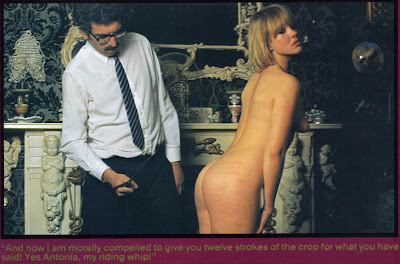 The sweet girl’s facial reactions during this epoch-making harangue give her game away. We are left in very little doubt as to Dr Weltscheim’s real motives for having Antonia under his very own thumb. And when we see Antonia bending for her twelve-stroke beating with the riding whip, when we study her response to its fiery caresses, when we listen to her screams and the Director’s sotto voce comments, we are wafted far, far away from the humdrum reality of conventional scholastic establishments — into the magical element of Dr Weltscheim’s total dominion over his girl pupils.
The Disciplinarian is the kind of video you have been waiting and hoping for, and perhaps wondering if it would ever be made. Yet it exceeds expectations and defies complete definition. The Disciplinarian is a brilliant, spell-binding production with marvellous action and dialogue. The video excels on many different levels as it captures and distils the very essence of discipline and correction — and the varied nuances of power and submission in interplay. The Disciplinarian makes endlessly fascinating, compulsive viewing and reviewing. 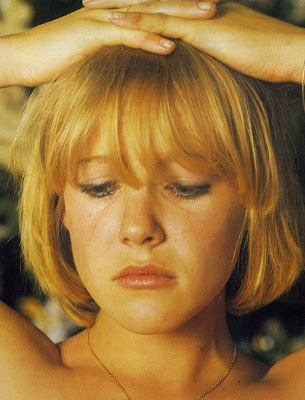