The subject of Punishment PT reminds me of a fantastic pair of videos from Cheek-to-Cheek featuring three gorgeous girls. This is the first of them. 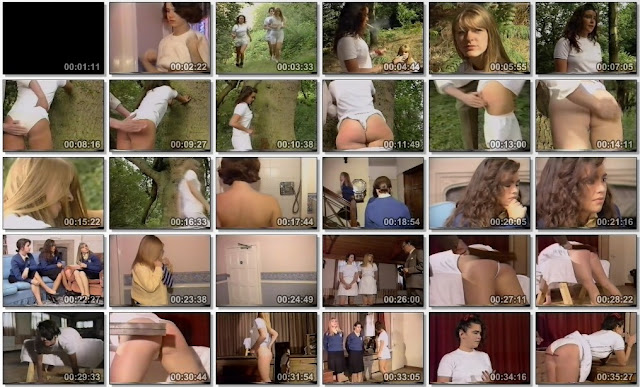 The review from spankingfilmreview.com:-
More pretty girls and eye candy from Metro/Cheek-to-Cheek. And some of the spankings are as good as you can expect from a company who wants their actresses to be able to work again tomorrow.
Three pretty girls strip and put on PT clothes, one of several nudie scenes, and always a highlight of these films for us, because we know we will see the girls spanked also. The girls go jogging in an exterior scene. They stop for cigarettes and are caught by a male school official.
After some discussion of this unauthorized behaviour, the girls agree to accept spankings on the spot, rather than be reported to ‘Mr. Marshall’ back at the school. Each of the girls, two brunettes and a blonde, must lean against a tree, drop her shorts, and take a hand spanking. The faceless male bunches the panties and smacks for a few minutes. This settles the matter, we thought.
The girls decide to take a shortcut back to school, which is trespassing. They are reported to Mr. Marshall, and their cigarette butts are found in dangerous dry grass. When the girls arrive at school, we are treated to a shower scene with one of the brunettes.
Marshall summons the girls, who report in full dress, school blazers. He is an ageplay actor we’ve seen at ROUE, BLUSHES, CALSTAR, and maybe at the bar in George Harrison Marks’ KANE films. He likes his girls. He explains the transgressions and the punishments – brunette Suzi will be caned because she is the oldest and should have been the leader; the blonde and the other brunette will be strapped. See him at 6:30 PM in the auditorium.
It is the room where we have seen other wonderful punishments. We remember ‘Sarah Jane Hamilton’ in ‘Naval Discipline.’ The blonde and brunette must bend over a trestle, which is simply a sawhorse with a towel for padding. Marshall straps both bottoms, panties bunched, with a big tawse.
Suzi is next. Marshall explains that the ‘Victorian’ position will be used. Bending over a tabletop, resting on elbows, palms in the air. Marshall bunches Suzi’s knickers and uses a whippy cane. Twelve strokes. She is shocked by how much it hurts, and actually breaks and jumps up cursing before she regains control. The twelve strokes are entertaining, and if this actress was just performing for us, we loved it.
I will post Sports Comeback, the follow-up video featuring the same girls, in due course...
Part 1: