From Roué 27
It’s a game we have all played at parties usually with the family! ‘And the consequence was…’
But for the dedicated chastiser ‘consequences’ are of vital importance, they are meant to be savoured at least as much as the actual chastisement.
And so this month our artist has elected to portray in colour and in black and white four of the after-effects of exemplary punishment on a selection of young miscreants. We hope you find them to your taste.
----//----
He didn’t cane her that often, Mr Wilkins that is. And it was never a spanking… always the cane. As Deputy Head he was allowed to give her up to twelve strokes… a round dozen as he liked to remind her… a dozen round was his little joke… the roundness of her pretty bottom he jested. He’d never given her twelve strokes… not yet anyway… he put an upper limit of ten on a sixteen-year-old as long as she behaved herself. She’d tried to please him this afternoon after school holding tight to the edge of the desk with both hands… resisting the temptation to put her hands back and rub the sting away between strokes, keeping her back well arched and her buttocks raised over the firm purple-covered bolster you had to get out of his cupboard before putting it on the desk edge. He always stripped you himself… school skirt well up, then your white half-slip up to your waist and tucked in, school knickers — official ones for Mr Wilkins — pulled down to just above your knees, and then your legs patted apart until your knickers were taut and not likely to slip any further unless you kicked which was forbidden anyway.
She’d tried so hard not to wriggle her bum after each swishy flick of the ‘golden fairy wand’ as he called it… fancied himself as a poet did Mr Wilkins… but she hadn’t quite succeeded, which meant he’d given her two extra this evening… eight instead of the six he’d written in the book… two strokes that would be officially ‘lost’ when the Headmaster checked before he wrote your half-term report.
She’d tried even harder not to cry, but although he was using his light thin cane, he was using his ‘wristy flick’, and it was stinging like mad. By the third stroke laid parallel across the crests of her nipped up cheeks, the little whimpering sobs had begun to break through, and she found it more and more difficult to ‘relax the buttocks’, as he was telling her to before each swish of the stingy rod.
The fourth stroke completed the tramlines horizontally, and he let her weep for a minute or two before giving her his first ‘hot kiss’. A ‘hot kiss’ from Mr Wilkins meant two quick hard strokes of the cane slanting across the buttocks to make an X… ‘a parting kiss, Miss’. Your bum could feel the lines of fire whist you sobbed and nipped your bottom cheeks to try to ease the biting tingling.
The second ‘hot kiss’ was even worse, and through your weeping you could just hear him chuckling with pleasure.
‘Two nice hot kisses for your lovely cheeks tonight Susan… eh.’
Now the caning was over you knew you could wriggle without asking his permission though you weren’t allowed to rub your smarting bottom until he told you to get up… and it was the wriggling across the hard bolster which did it… the tingling excitement round the front of your thighs and the wriggling legs still wide apart like he told you, and knowing he was watching, gloating over what was going to happen quite soon… inevitable… soon… oh now! Just the shamed sobbing tears as you lie there still. 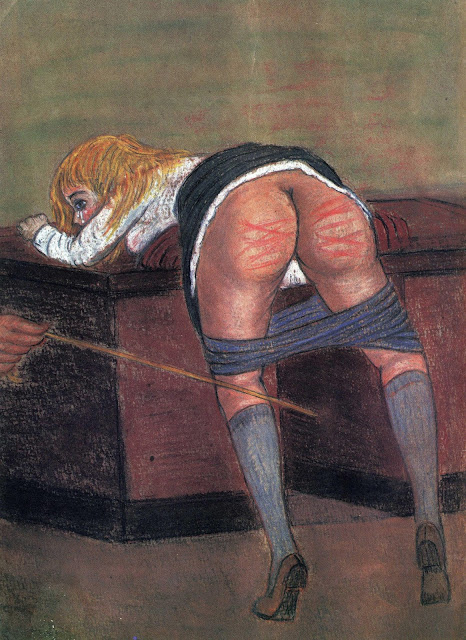 ----//----
He always makes her stay down across the cushion on the top of his desk for at least two minutes before he tells her she can get up and ‘rub it girl if you want to.’
She never needs to be told twice after a good strapping… her bum’s burning all over from the tops of her thighs to the tops of her pert meaty crests, and rubbing it helps a bit… but not that much. She always tries to keep her knees together when she first stands up but the little Scottish reel her feet do from that horrid tawsing soon make her show a lot of the private bits she’d rather have kept away from his greedy eyes. She’s not allowed to turn round to face him either, and her skirt has to be well up at the back whilst she’s rubbing, after all he wants to see whether he’s done a really good job.
He’ll let her dance about for the three or four minutes she’ll need before her sobbing ceases, and then he’ll want to do more than just ‘see’. Perhaps he’ll make her stand there just holding her clothes up or maybe this afternoon she’ll have to sit on his lap whilst he fondles the hot buttocks and thigh-backs his punishment has produced, whatever happens she won’t be returning to her class for quite a time… not ‘til he’s quite satisfied. 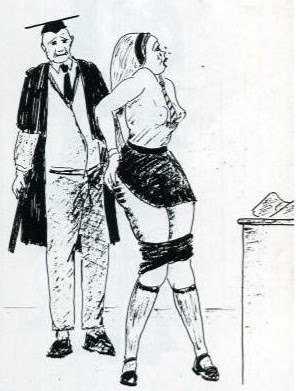 ----//----
He’s probably the kindest of them all is Mr Ashbee. For one thing he always offers you a choice… ‘are you going to be a good girl after I’ve given you a nice little spanking Miss or do I have to look for that hairbrush?’
So like any sensible young lady she’s opted for a ‘nice little spanking’ not too ‘little’ and certainly not ‘nice’… except perhaps for him! Her bottom’s glowing no doubt but now she’s going to be a ‘good girl’ like she promised… standing between his parted legs whilst he gives her a ‘nice cuddle, eh, just to make it better.’
It’s not the sort of cuddle your dad would give you, not at seventeen years old… not by a long chalk!
You can bury your blonde head on his chest and sob onto his shirt front (and try to hide the shamed blush you’ll be exhibiting soon), he’ll keep your face hidden too with an arm round your shoulder whilst a large hand roams over your hot bare smacked bottom cheeks… and you’ll be eased forwards onto it… you’ll know it’s there all right, not even the thin material of your school skirt will intervene.
It’ll take him at least five minutes to console you before, despite your protests, the ‘little button’ game starts… your blouse and his trousers… one button each until they’re all undone. Sometimes you wish your breasts weren’t quite so well-developed, but Mr Ashbee seems to think highly of them, and tonight you’ll be washing the horrid old sticky stuff off your skirt before your mum notices the stain. It might have been less trouble to have chosen the hairbrush… mightn’t it?

----//----
‘Bare-Bum Boswell’ the girls all call him!
That means everything off from waist to sock-tops for an after-prep caning.
You have to put the cane back in the cupboard too whilst you’re still weeping with the fiery sting of that swishy golden rod.
You only have to stand up at the end to see all the other canes in front of you and his special black strap plus your discarded skirt and knickers.
And that’s always the moment he asks you. When you’re looking at that stingy old strap!
‘Right young lady… what’s it to be then?… the strap or a spanking?’
You ponder a bit… if it’s the strap that’ll be it… ten or twelve searing stingy stripes on top of those sore cane marks, but nothing more… or a tingly hand-smacking plus extras… hands fondling… roaming… tickling… groping… ugh… the horrid beast!
You make the decision…
‘I’ll be spanked sir.’ Now you’ve done it… you’re a cowardy custard! He positively gloats… his piggy eyes gleaming as usual.
‘Good girl… well done… what a sensible girl… come along then Miss… get that naughty little bare bottom over my knees… get it well up now… right up dear… that’s better… much better… legs apart now… wider dear… much, much wider… try not to wriggle… don’t clench… just relax… be a good girl now… don’t spoil it… legs apart again… bottom well back… hurts a bit, eh… bound to… try not to wriggle, eh… you’re a very naughty girl aren’t you… ah… yes… uum… yes… good girl!!’ 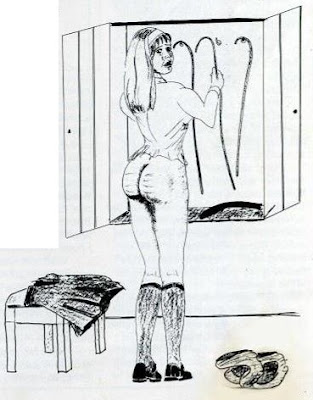