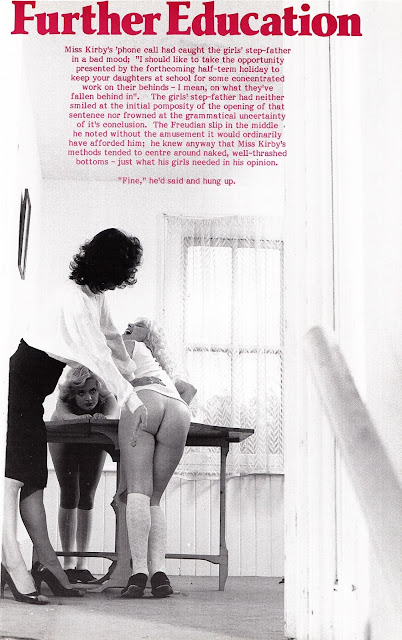 Miss Kirby’s ‘phone call had caught the girls’ step-father in a bad mood; ‘I should like to take the opportunity presented by the forthcoming half-term holiday to keep your daughters at school for some concentrated work on their behinds — I mean, on what they’ve fallen behind in.’ The girls’ step-father had neither smiled at the initial pomposity of the opening of that sentence nor frowned at the grammatical uncertainty of its conclusion. The Freudian slip in the middle he noted without the amusement it would ordinarily have afforded him; he knew anyway that Miss Kirby’s methods tended to centre around naked, well-thrashed bottoms — just what his girls needed in his opinion.
‘Fine,’ he’d said and hung up.
Carte blanche assured, Miss Kirby informed the school caretaker that she would be commandeering the disused older wing of the school for the weekend. He was to find two beds, with mattresses and to furnish what used to be the staffroom so that it could be used as a classroom. No, he need not go down to the cellar to kick the central heating system; it rarely got very cold in November.
Some canes would be needed; he was to supply them and maintain the utmost discretion so far as the Principal and other members of staff were concerned. Miss Kirby meant to exploit the girls’ weekend with her cane to the full. 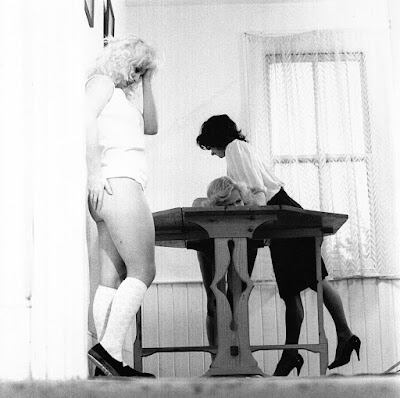 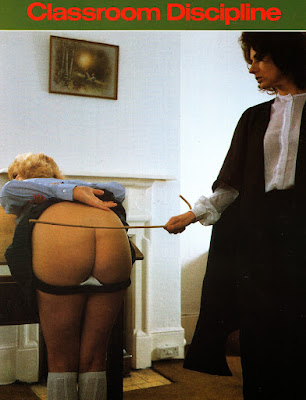 Miss Kirby needed to make no preparation for this lesson; the only thing the girls would be taught was how to get their knickers down without making a fuss and thereafter how to make a fuss without inhibiting the cane’s access to their bottoms. 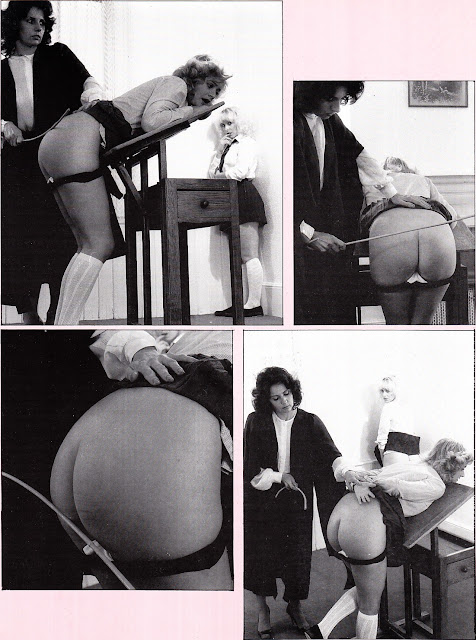 Elaine’s plump bum is to be first; a dozen strokes would hardly be sufficient to do the girl’s buttocks justice, so an extra half-dozen are applied for good measure. 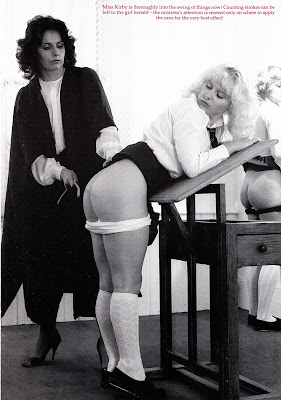 Flustered gropings for where the cane has landed are dealt with by the instruction that the girl’s hands are to be placed in the hollow of her back and kept there! 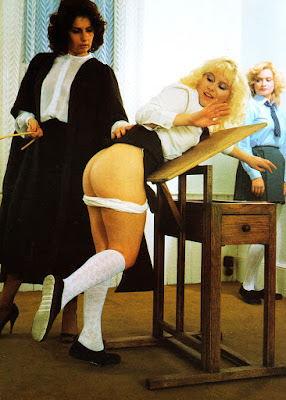 Tears accompany every successive stroke, while Julie pouts miserably and waits for her turn to come. 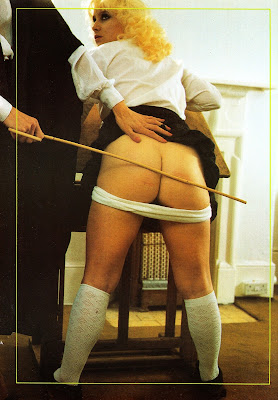 Miss Kirby is thoroughly into the swing of things now! Counting strokes can be left to the girl herself — the mistress’s attention is centred only on where to apply the cane for the very best effect! 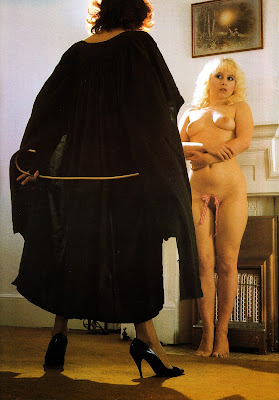 Julie is as brave as she can be but canes and her bottom don’t go well together. 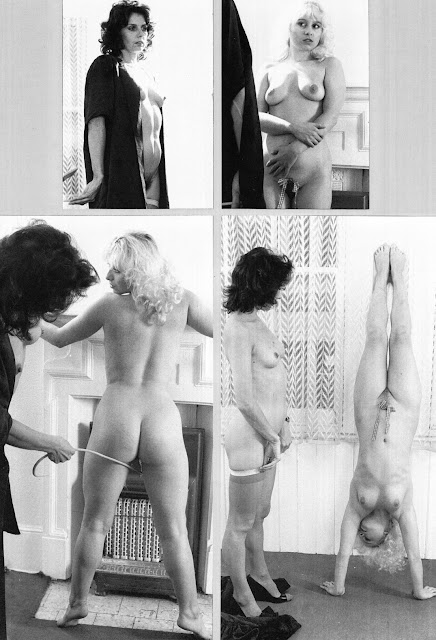 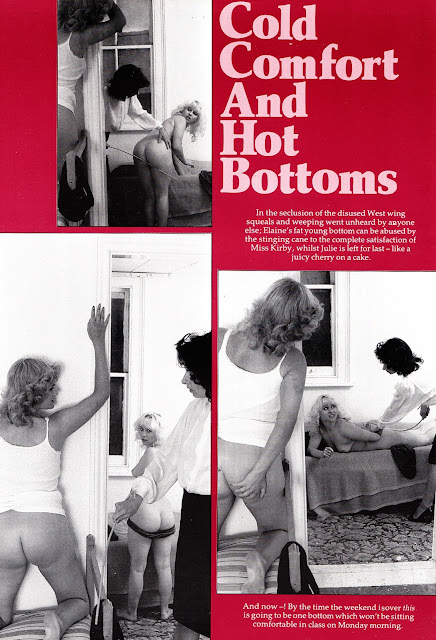 In the seclusion of the disused West Wing squeals and weeping went unheard by anyone else; Elaine’s fat young bottom can be abused by the stinging cane to the complete satisfaction of Miss Kirby, whilst Julie is left for last — like a juicy cherry on a cake.
And now —! By the time the weekend is over this is going to be one bottom which won’t be sitting comfortably in class on Monday morning. 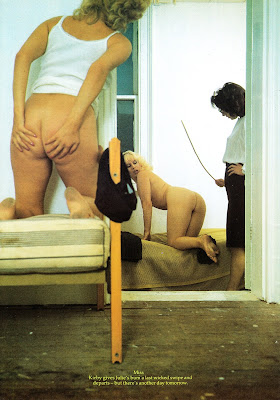 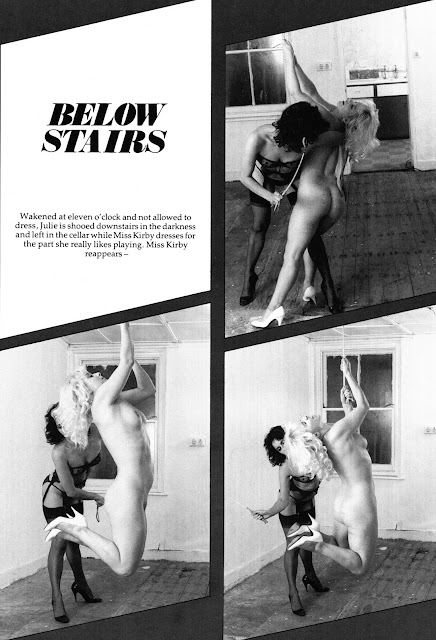 Wakened at eleven o’clock and not allowed to dress, Julie is shooed downstairs in the darkness and left in the cellar while Miss Kirby dresses for the part she really likes playing. Miss Kirby reappears — 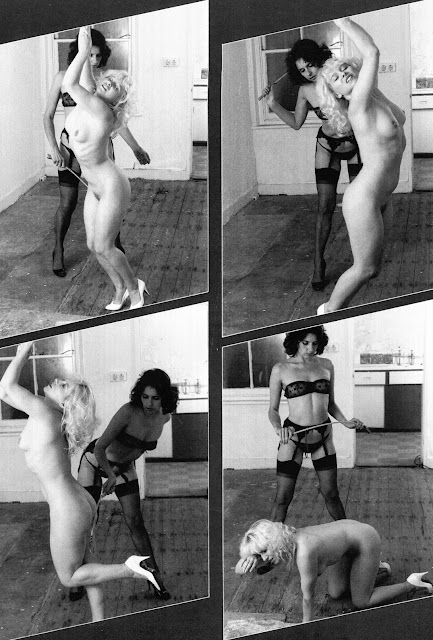 — one does have to admire her sense of theatre! 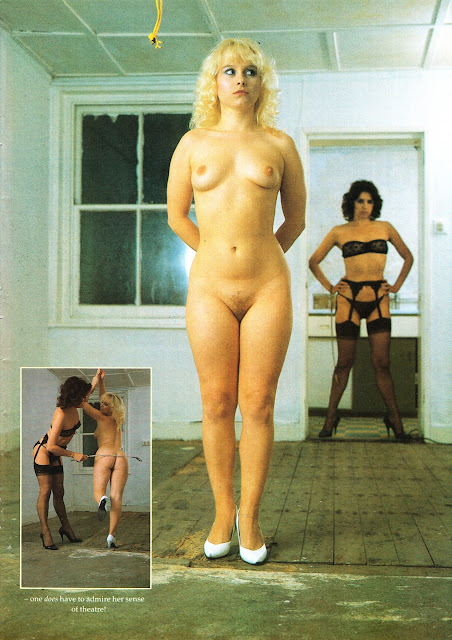