A Little of What You Fancy — Stockings ‘n Stuff


We asked her to bring stockings and suspenders and some sleek silky fripperies for being spanked in. Her gasp was audible over the telephone. ‘Spanked in? You mean like a naughty girl?’
The way she said ‘nordy’ was charming. ‘Certainly. Didn’t you know this is a spanking magazine? What part of the world are you from?’
‘Australia. I’m only visiting England for a few months,’ she said in that delightful accent redolent of sun and sea, koalas and kangaroos.
‘What part of Australia?’
‘I’d better not tell you in case someone sees this and tells my mum.’
‘What would happen then?’
She giggled. ‘I might get spanked.’
When Kylie arrives at our office, she looks so sweetly innocent it’s our turn to gasp.
‘How old are you?’
‘Eighteen.’
She might have been from the Upper Sixth, venturing out with a daring dash of lipstick and a glint in her eye. She might have been straight from secretarial college reporting for her first job, uncertain about the big wide world.
We like Kylie at once. One of us wants to scoop her up in his arms and take her home. But there’s work to be done. Well, somebody has to do it!
‘I was a bit of a nordy girl at school,’ she tells us, almost defensively. ‘A bit of a rebel, always in trouble.’
‘So you need a good smack-bottom, then! Long overdue, would you say?’
Kylie looks down, chewing at her lower lip as she considers this. Then she nods. ‘You could be right, I suppose.’ She doesn’t sound too convinced.
Kylie goes on to say that she worked in an office for a while, but hadn’t liked it much. Filing was her pet hate, and she spent a lot of time staring out of the window.
‘Excellent,’ we suggest. ‘Today you can be a pretty but extremely nordy office girl who messes up the filing, idles away her time, and gets her bottom soundly punished to show her the error of her ways.’
Kylie blushes, charmingly. ‘Are you really going to hit my bottom?’
‘Yes.’
She sighs. ‘Better get on with it then, I suppose.’
Kylie looks so sweet when she says it, how could anyone wish to chastise such a darling? (Answers on a postcard please…)
She eyes the leather-backed clothes brush with a trepidation that isn’t all feigned.

‘Bend over the desk, young lady.’
There is tension in the air. Suddenly this feels very real, and a lot of it is coming from Kylie. We notice how her legs shiver as she leans forward, teetering a little on her stiletto heels. We slowly raise her skirt to reveal a petal-soft 18-year-old bottom in brief tight panties of ivory-hued silk which clings to and pampers the curves, while the suspender-straps tugging at the stocking-tops create an intoxicating total image that might have been inspired by a sighing man’s fancy. 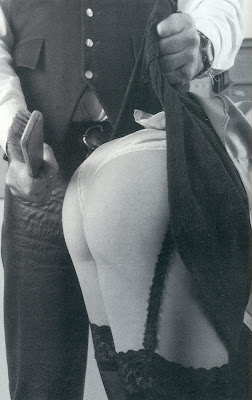 This naughty young bottom seems to plead to be beaten. And so it shall be — well, wouldn’t you? The brush-back smacks in, cracking against the rumpy rounds and making them smart. Kylie yowls in surprise and shakes her hips as if shaking off sparks.

As Kylie’s shapely behind heats up with the stern succession of impacts slapping against it, she begins to jerk and squeal, but makes no attempt to rise. This girl is an Aussie, and prepared to take her punishment without whinging. 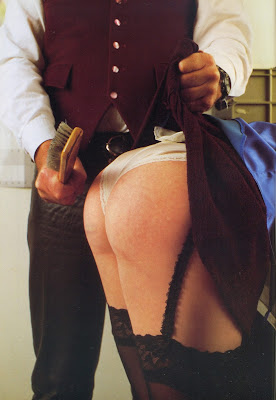 With Kylie’s bottom tingling nicely it’s time to move things along. Quietly submissive, she strips off her blouse, bra and panties as instructed and pulls a creamy silk slip on. Its sleek coolness stiffens her maidenly nipples, and when she steps out of the ivory-coloured panties and puts on little brief black ones with the stockings and suspenders she looks the image of guilt in need of stern correction.
When the cane is produced, she flinches away. ‘Not with that!’
‘Yes, with this. Put one knee up on the desk and push your bottom out. You’re going to get the cane, my girl. I hope you didn’t think that little warming with the brush was all you were going to get?’ 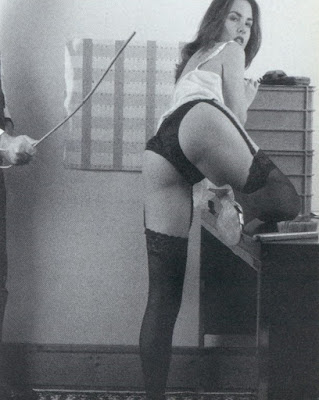 The first swing of the cane bites into the soft flesh of her buttocks and provokes a throaty cry of complaint. 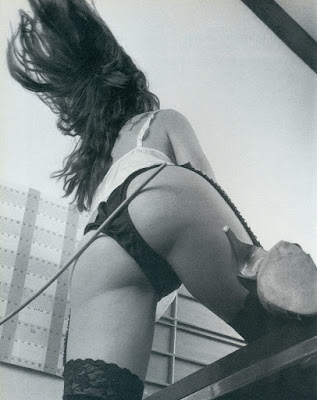 After eight swishy thwacks delivered moderately hard and with several seconds between, Kylie cries out: ‘It hurts — oooh, it hurts!’ 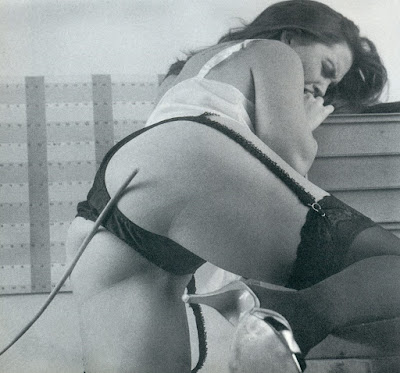 Tears sting her eyes as she stands up, rubbing and squeezing her sizzling bottom-cheeks. But it isn’t over yet!

‘Take off those panties and put these on.’
Kylie blinks, and stares.
How many of us have a fetish about French knickers? Black, satiny, sexy French knickers. They are designed to cup the cheeks of the female bottom in such a wickedly tantalising manner, sucking our minds into the secret, alluring depths, the outer frills riding up to invite taunting glimpses of the curvy surfaces just beneath. 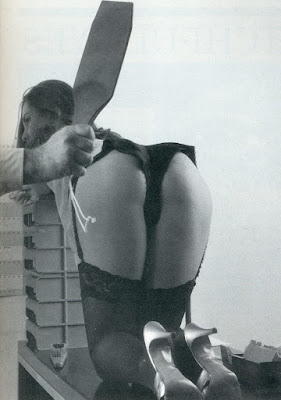 Ah, Kylie! Up till now you have been but a naughty girl being chastised for bad behaviour. But in this garment you are suddenly a woman who has committed an indiscretion in love. Kneel up on the desk and jut out that delicious arse to receive the drubbing it so richly deserves! A broad rubber paddle will do justice to such delight. 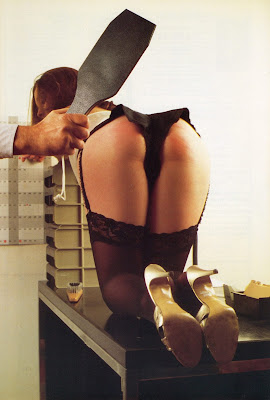 The paddle thwaps when it strikes full across both bottom-cheeks, curls round the slopes and briefly grips with a hot, fervent kiss before flying back to thwap home again! You arch in your spine to push your bottom out more, more, to receive the painful salutations. 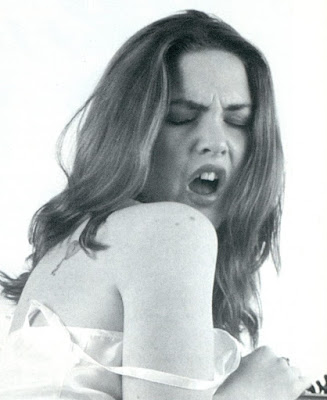 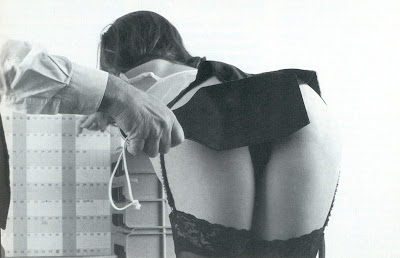 With her bottom prickling and burning, Kylie is allowed up to put her satin blouse back on. Why? The little dear complains of feeling chilly up top — though certainly not ‘down under’. Or perhaps it’s to give the smarting in her pretty backside time to cool down, for she knows by now that there’s more to come. Somehow the change has magicked her back into that wickedly naughty girl again — one who knows she’s done wrong and must be sorely dealt with. Kylie glances soulfully up at her chastiser, hoping he might relent.

‘Bend down, girl,’ comes the command. As if to the manner born, Kylie obeys, stooping tightly over into the time-honoured position. 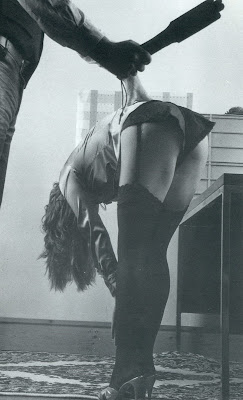 The French knickers ride up between her impudent buttocks as she bends, making an enticing target. This time the implement is a snappy four-tailed tawse, one that packs a nasty bite. 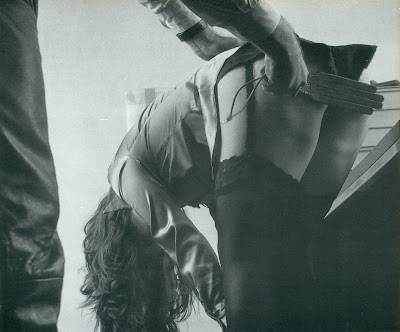 And bite the tawse does, striking loudly down across the tender, meaty rumps beneath the clinging satin, printing crimson patches on the tensed cheeks. And although Kylie grunts and cries out, she bears the searing flashes with fortitude, until her bottom is a burning sea of sensation.

‘Take down your knickers.’
It’s time to see this cheeky bottom unadorned. Kylie does as bidden, sniffling a little. She has only ever read in old books about punishments like this, but for Kylie this has already become very real, and the atmosphere is highly charged with that breath-stopping feeling that happens when fevered fancy melds with hard reality. Somewhere in the pit of her tummy there is an excitement she cannot define. She tells us later that it is being made to accept punishment that creates tinglings in more places than one. 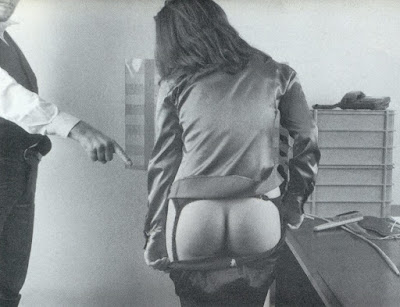 Kylie’s adorable bottom is bare.
‘Over the desk again, you wickedly naughty girl.’
She complies with a little whimper. Her naked cheeks are hot to the touch, and will respond well to a brisk hand-spanking. Kylie yelps and twitches as the chastiser’s palm slaps firmly over every inch of those luscious rounds, re-stoking the fires that have been lit there. 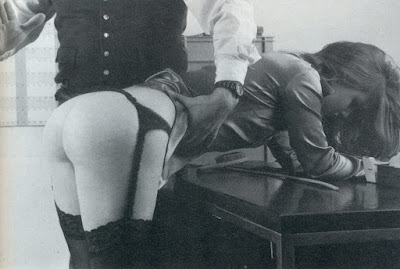 As the heat and pain build up again, she thumps on the desk with frantic fists and stamps on the floor, but stays down like a good bad girl knows perfectly well that she should, until her punishment is over.
Not that it is over all that quickly. We feel it is important that this young lady learns her lesson as thoroughly as possible. 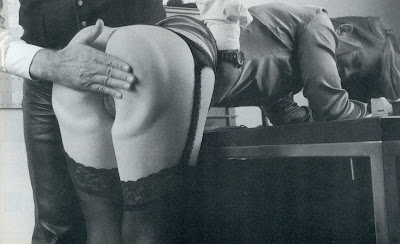 Kylie has taken it well. Now, because her pretty buttocks throb and burn, and just to show how kind and generous we can sometimes be, the baby oil is produced for our lovely antipodean babe, and those naughty buttocks are thoroughly pampered and cooled.

Mmmm — that’s nice. Her chastiser soothes and caresses her naked bottom-cheeks, gentling away the heat and pain with palms and fingers that glissade over the slippy slopes and probe the springy flesh. After the cascades of stinging, biting hurt that have visited those darling cheeks, she finds these new sensations quite exquisite. 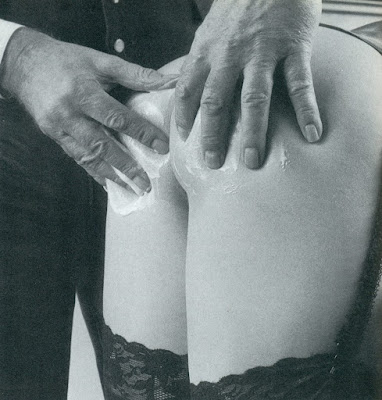 ‘More,’ breathes Kylie. ‘More…’ She is smiling now.
So are we…
Of this be very sure, the lady will never forget. 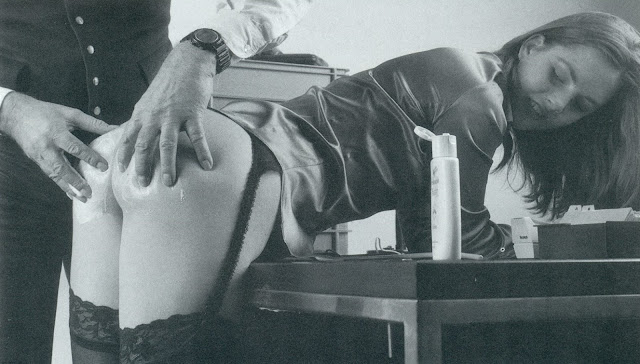 Email ThisBlogThis!Share to TwitterShare to FacebookShare to Pinterest
Labels: Photo-story, Privilege Plus