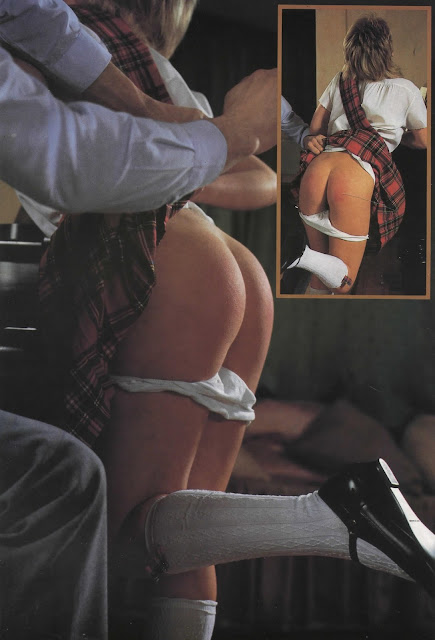 This morning we are going to that little English shop in town. English and Scottish woollens etc. and it is the latter that particularly interests me. Last night I had the sudden marvellous idea, with Fiona being Scottish, of dressing her in a kilt. I have an intoxicating vision of Fiona arrayed as one of those girl pipers (is it the Dagenham Girl Pipers Band?) I am sure I can get her a kilt in that shop. I am afraid I know nothing of tartans and in any case they are unlikely to have Clan Fraser, but we will not be fussy. Fiona of course will have her recorder, not the pipes. And if she plays at all like yesterday she will certainly need her kilt turning up.
What colour knickers do the Dagenham Girl Pipers wear, I wonder?
I acquainted Fiona with my kilt idea at breakfast. She does not seem bowled over with enthusiasm but perhaps she is still thinking of last night. The spanking and then my taking her pyjama trousers down and applying a little soothing cold cream to the glowing globes.
There may in addition be a darting thought of the martinet, and the cane. I rather think that before lunch I will take them out and show them to her; but first it is into town.
The English shop did splendidly. We have a kilt and sash and I have also made some little stocking tabs. The manageress, an English lady, had no great knowledge of tartans, as I had feared, so I do not know what the items I have purchased actually are. But it is all extremely attractive. This rather ignorant, though quite amiable, English lady also could not enlighten me as to what knickers might be worn by members of a girls’ pipe band, but we need not worry about that; it could well be that they all wear what they like.
Yes I have the distinct impression that Fiona does not like being dressed as a girl piper, though why that is I cannot imagine, to me she is simply delightful. Thus arrayed she does a few scales and then one or two simple pieces. Her rhythm is really very poor and I give her a triangle to get back to basics. A certain amount of corrective disciplining is necessary, especially with Fiona looking so entrancing. Highly stimulating. So much so that I have to admit my head is filled with thoughts of further delights.
So after lunch I suggest Fiona goes up for a siesta. And after some ten minutes I find myself following her, in a state of keen excitement. Her room is pleasantly cool behind the closed shutters and she is lying on her back in the half-light gazing up at the ceiling. She is covered by a sheet and I wonder what else. I sit on the side of the bed. Her big eyes glimmer in the gloom, no doubt registering some slight alarm. I am thinking of course of that first time with Miranda, when I was expecting alarm but heard instead the young miss had come fully prepared. Could it conceivably be that Fiona has something hidden in her recorder case, or elsewhere?
I tell her, my voice a shade tremulato with excitement, that I think I will lie down with her and we can then have a little chat. I lift the sheet. Fiona is in knickers and bra. I myself am in my dressing gown with, as it is a hot day, nothing under. Fiona is trembling as I slide my hand onto a bare cool midriff.
Stroking the silky flesh I talk gently of corporal chastisement. Of my martinet and my cane. Thinking of those splendid instruments can concentrate a girl’s mind wonderfully especially if she has not, as Fiona had not, had previous acquaintance with them. My hand nudges down and encounters the edge of taut knickers. My fingers slide in under while Fiona breathes that she does not want the cane or ‘that other thing.’
‘Not many girls do,’ I tell her. Her body is taut, her breathing now somewhat agitated, as my fingers encounter crisp curls. ‘But something of that sort is necessary.’ Fiona does not attempt to prevent my hand which duly discovers that she is quite damp. Dampness. is of course indicative of receptiveness.
Is it possible that I have a second young lady who had known Mr Bartingly?
I take my hand away and suggest that we slip her knickers off. Then I can see how her bottom has taken the spankings. A tremulous voice says, ‘please, I don’t want the cane.’
Perhaps she thinks I have not understood. ‘I really don’t,’ Fiona repeats, this time turning towards me. And possibly to emphasise this statement her hand fumbles in the silk folds of my dressing gown. Reaching in where I must confess I am in a highly excited state. Her cool hand where I am quiveringly hot.
‘Please…’ Miss Fiona Fraser repeats. 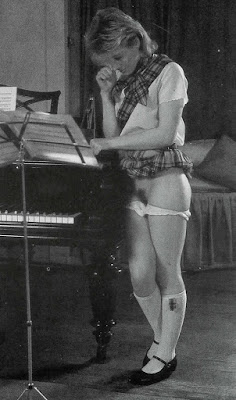