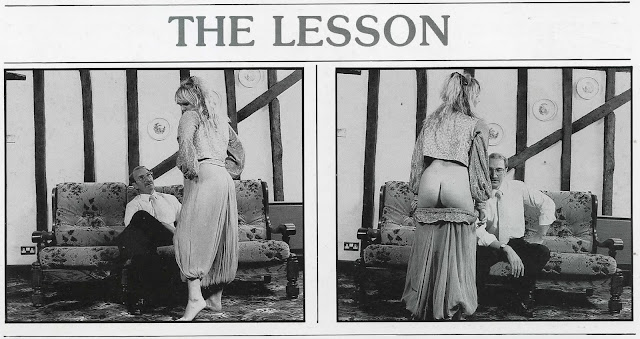 A harem outfit. That was what it was. She had opened the parcel and looked, bewildered, at the contents. Holding them up. Then she realised: harem trousers and jacket. And the note tucked inside: ‘I’ll call for you tomorrow at 10 o’clock sharp. Have these on. You can put a coat on top. Don’t keep me waiting. Or…’ It was signed Brian Bradstock.
Mr Bradstock was the new man at the TV rental shop, replacing old Mr Atkins who had just retired. Mr Bradstock was not like Mr Atkins. Not at all. Mr Atkins had allowed her to get way behind on the TV rental payments. Simply saying each month could she manage something next month, and then next month… well, the same thing. So that she had got nine months behind. And now suddenly here was this Mr Bradstock yesterday, coming round and saying it had to be paid right up to date immediately. Or else.
Debbie couldn’t pay it. She didn’t have it. Gary gave her the money for it with her housekeeping but the way things were, prices… the money just disappeared. She couldn’t even pay even one month right now, let alone the nine in arrears.
‘Maybe a summons then,’ horrible Mr Bradstock had suggested. ‘A court action. All reported in the local rag of course.’
She made a desperate, despairing sound. 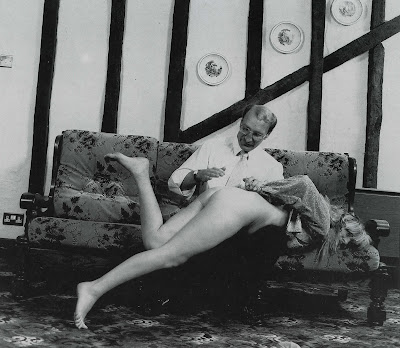 Mr Bradstock’s face had come close. ‘If you can’t pay right away, Mrs Simpkins, I think we need some sort of lesson. Eh? So you won’t get in that position again.’`
That had been yesterday. And now this morning that youth from the shop had brought round the parcel. With this inside. Harem trousers. The jacket. And this note.
At the bottom Mr Bradstock had added: ‘Just these two items, Mrs Simpkins. Understand? No knickers or bra. Unless you want us to take legal action.’
Debbie’s hand came up and she chewed a nervous fingernail. What…? What stuck in her mind was that no knickers or bra bit. The trousers were see-through. Transparent. Oh God? Whatever Mr Bradstock meant to do was not going to be nice. What was he going to do? Well, she would find out. She had no choice but to do what he said, however horrible. She didn’t have the money and she didn’t dare ask Gary for it.
Mr Bradstock was right on time. 10 o’clock as Debbie saw his car outside. She had the outfit on: the fully-transparent trousers and the little brocaded jacket. Nothing underneath. A pair of sandals on her feet. She took a deep breath and put on her coat. What were the neighbours going to think, seeing her go off with Mr Bradstock? At least she had her coat on. She pulled the legs of the trousers up to her knees: that way you couldn’t see.
In the car Mr Bradstock pushed her coat open, to see the trousers. He grunted. ‘Nothing under I hope?’
She couldn’t answer: numb with apprehension. Debbie had been pretty much that way ever since yesterday morning. Gary had wanted to know why she was so quiet. A headache, she said. Debbie didn’t have a headache now, she just felt sick. 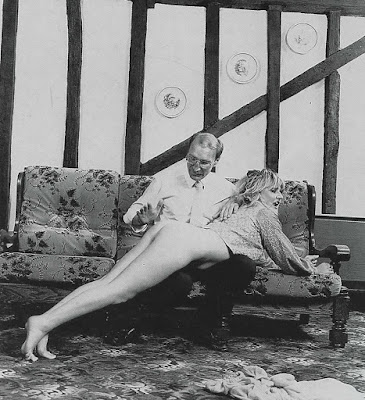 Out in the country to a cottage. White walls and beams. Did Mr Bradstock live here? More to the point what was he going to do? He had said nothing in the car except, ‘What you need, Mrs Simpkins, is a good lesson. Isn’t that right?’
Inside the cottage he now said, ‘Right. Get that coat off. And those sandals.’
The lesson. She was going to get her lesson, whatever it was. Debbie whispered, ‘I… I’ll try and get the money. Just give me a few weeks.’
‘Yes, Mrs Simpkins. It’s always a few weeks, isn’t it? Let’s see you. Take the trousers off.’
Then she saw: from somewhere, there was a cane in Mr Bradstock’s hand.
‘No!’ she screeched. ‘No. You can’t… aaaiieeehhh!’ The cane had sliced in across her flank. Debbie’s hand moving automatically to stop it caught the blow partly on her wrist. ‘Aaaooouuuhhh!’ she squealed.
‘Get them off then. We’re going to have a lesson, Mrs Simpkins. Unless you want to be up in court. The lesson is we mustn’t get behind with our payments. Now get the trousers off.’
Whimpering she slid them down and off.
‘That’s it. Now we’re going to give you the cane, my lady. I’m going to make that backside so hot you won’t want to sit on it for a week. But first of all let’s smack it, shall we? Come here, over my lap.’
Mr Bradstock had put the cane down and was sitting on the settee. Debbie was shaking. That cane. He was going to cane her bare bottom. She shook her head. 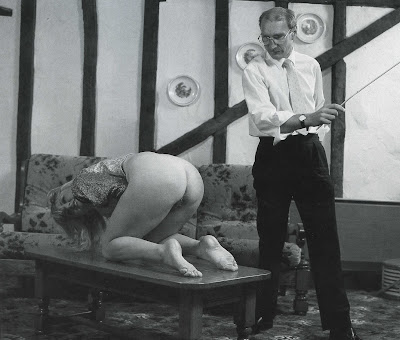 ‘Come here!’
Over his lap. Mr Bradstock’s hard hand beating down on her soft bare bottom. Really knocking the breath out of her. It hurt and it was dreadfully humiliating. But she was thinking of the cane. He couldn’t cane her…
The spanking continued… and then she was standing, her bottom burning. Mr Bradstock was standing too, his face red. And the cane…
‘Right. Now the cane. Get on the table. That’s where I’m going to do it. Get on your back, with your legs up in the air. You’ll enjoy that, eh?’
Oh Christ! As the meaning sank in. Not like that. She tried to plead with Mr Bradstock but he wasn’t interested in pleading. He was interested in his pound of flesh. In humiliating her in other words. That position… upside down with the whole of her pussy on display. And also of course that cane. Her blood running hot and cold as she made herself get up on the table. In that awful position Mr Bradstock wanted. Lifting her legs. Seeing him gazing at it. She felt sick. But there was the other thing to come. The real business. That cane in his hand… The cane that Mr Bradstock was now raising. Debbie’s wrist still hurting from where it had caught that one. Now it was coming down on her bare, freshly spanked bottom. She gave a frantic yelp for mercy. But she knew…
‘Aaaarrraaaggghhh!’
Oh Jesus Christ! He couldn’t. He couldn’t hit her like that. But he had.
‘Stay there. Stay like I told you. You’re getting six…’ 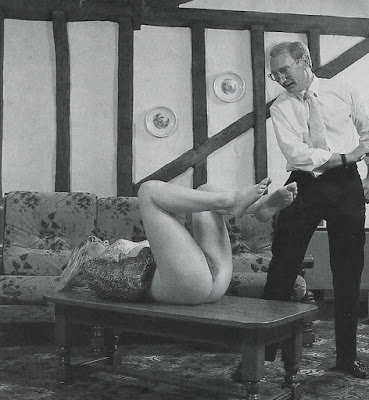