‘Nineteen,’ said Madame Lamartre. ‘What? No, certainly not.’ She examined perfect crimson fingernails as the voice over the telephone continued, more apologetic now. Hearing him out and then, crisply, in her only slightly accented English, ‘Well, I cannot speak for other establishments, Mr Spencer,’ but we do not play with any of that business here. If I say 19 that is what she is.’
More apologies came over the line. As well they might. Madame Lamartre was not short of clients, she didn’t need this particular Englishman. Whereas quite probably he did need her. If he wanted… she allowed herself to be mollified. English gentlemen could be charming, flattering even, or some of them at least. And this Mr Spencer was now very keen for an appointment. Well, he had apologised.
‘We can say 3 o’clock then, if you wish. No, not at all. She will be ready for you.’ 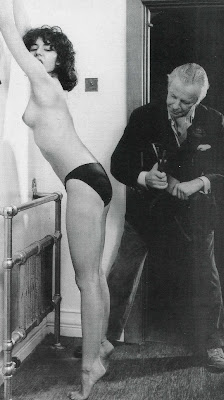 The house was in the Rue du Gare, on the south side of the river. A smart but discreet district. A gentleman could walk, a little pleasant exercise on this mild afternoon. He didn’t need to be climbing furtively out of taxis, scared of being seen here. A maid, neat in a shiny black dress, opened the door in response to his ring. She was in her 20’s, a good-looking blonde. Could she perhaps…? No, perhaps not. He recalled his friend saying that Madame Lamartre kept things strictly apart. A maid was a maid. And a little plaything… was… something else.
The girl took his coat, smiling. He was expected. Would he like a glass of wine? No? In that case Madame would see him afterwards. He could go up.
The young lady was waiting. Room 14; it was on the first floor. She gave a little curtsey. 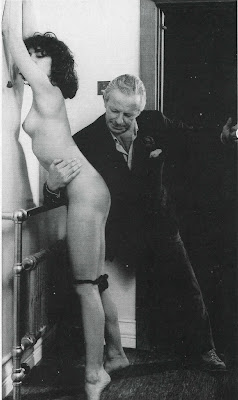 The hall and stairway were softly lit, a mellow yellow light bathing dark polished wood and rich furnishings. Deep carpeting muffled any sound as he moved along the hall and up the stairs. Another flight of stairs continued up. How many rooms were there? And how many…? But Number 14 would be along here.
Yes. His heart-beat had accelerated and it was not primarily due to the stairs. He straightened his tie: an automatic gesture. Nervousness. Excitement. A soft little knock. He entered.
The room was a sharp contrast to the sensuous richness outside. The floor was barely carpeted, the furnishings only a simple, functional bed and dresser. On one wall was an ugly arrangement of heating pipes. His eyes took all this in but it was of course the girl he was looking at. Sitting on the bed. She had a palely pretty face with large, dark eyes and curling black hair. She stood up, with a little smile. She was in a simple dark blue dress. 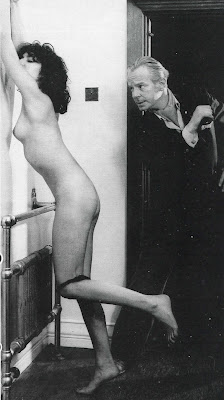 He spoke, in English, and she answered. More of an accent than Madame Lamartre on the phone but adequate. It wasn’t essential, of course, she could be taught, but it was clearly much better if she spoke it already. If he was going to take her… He took her chin in his hand, raising her face. A few questions, the answers delivered pertly, long lashes fluttering on those large black eyes. His hand came down and rubbed across the front of her dress. There appeared to be nothing under the thin material. Her breasts weren’t large but they were firm and high, thrusting out cone-shaped. His hand squeezed them. Then he turned her, and felt her bottom. There were knickers underneath, over the slimly-rounded flanks.
He spoke again. Obediently she unfastened the buttons down the front of the dress. Slid it down and stepped out of it. It went on the bed, and she stood with thin arms at her sides. Flat-heeled shoes and a pair of brief, dark blue knickers. That was all. An almost boyish figure except for the firm, pointy breasts which looked bigger now against the slimness of her. The nipples were half erect. His hand came out again and took hold of one; toying. 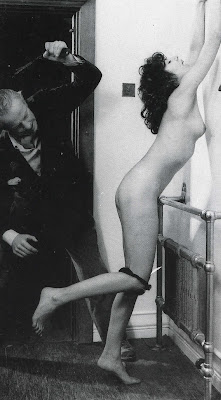 He let go and stepped back. And showed her. Taking the broad, two-tongued leather strap from where it had been bulging the pocket of his blazer. Holding it out. Telling her. The big black eyes were even bigger as they focused on the strap, her pale face now with a pinkish tinge. But she nodded. Well, French girls — indeed continental girls in general — were usually used to the strap; they frequently got it at home. That was partly why an experienced gentleman found them so attractive, why he came here to Paris if he needed a certain addition to his household.
‘I shall need to see,’ he said. ‘I shall need to try you out. Here.’
The long lashes fluttered like moths at a flame. The red mouth came open and then closed. She nodded again.
He told her to take off the shoes. And stand against the wall. Facing out with her arms raised. Stretching them as high as she could, standing on tip-toe. Arching her back. 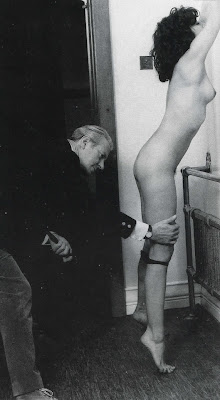 She did it. The big eyes said she thought he was going to lash the strap in across her front: the tautened thighs, or her stretched belly, or the tight, thrust-out tits. But he didn’t. Instead it was his hand. Toying with the thrust-out tits. And then sliding down, to the tight vee of the knickers. Feeling her heat. Rubbing his fingers into it.
When he did use the strap it was on her bottom. Turning her, with her arms still stretched. A couple on the seat of the brief pants and then sliding them down. Cupping her bare belly, and groin, in one hand and with the other lashing the stiff leather into the boyish cheeks. As hard as he could. She groaned, but did not cry out.
----//---- 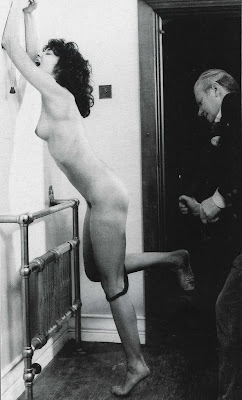 ‘Yes, I like her very much,’ he told Madame Lamartre half an hour later, apparently unconcerned that a bargain had not yet been struck, or a price agreed.
Madame Lamartre smiled. Some persons would seize on such an opportunity to demand something outrageous. How fortunate for him Helene Lamartre was a lady.
‘I’d like to take her now,’ he said. ‘I’m sailing tomorrow. As for tonight; I’m sure the management at the Majestic can turn a blind eye.’
Madame Lamartre smiled again. ‘Like your Lord Nelson as you say.’

Email ThisBlogThis!Share to TwitterShare to FacebookShare to Pinterest
Labels: Blushes, Join the Dots