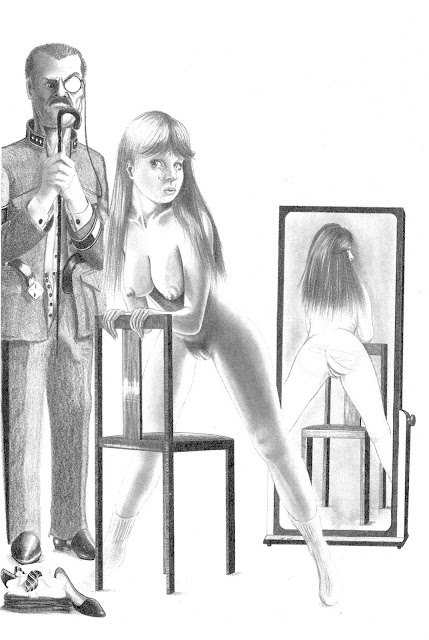 Then he was picking up the cane again, and at last her actual physical torment began. The punishment — his up-sweeping arm descending to land stroke after stroke upon that beautiful bare bottom, stripe after stripe to cut its livid weal across the spasming, twitching buttock-cheeks — lasted only a matter of minutes, even though a full dozen had been implanted before Kurt finally called it a day… finally, that is, insofar as the C.P. aspect of the Head-Girl’s ordeal was concerned.
It was at this juncture… or should I have said “conjoining”?! — that I made as graceful a departure as I could contrive; the next stage in the “Downfall-of-a-Head-Girl” saga held little in it for me, after all! My Chief did not press me to stay as he murmured to a past-caring Marietta, ‘My loyal aide, Lieutenant Meyer, is about to leave us, my dear… I wonder if it could be envy or jealousy! — eh, Freddy?… wishing you could have some of the action yourself, maybe?… ah! well, it is only right that being the C.O. should have a few perks, after all!’
By the time I had made the rounds, checking on the other girls and seeing that the work had been carried out — and identifying and warning those four prefects soon to pay at least part of the same price as Marietta for their knickered disobedience, I calculated correctly that the Major’s little frolic with the Head Girl would have been concluded — to his own satisfaction if no-one else’s — and indeed Marietta, once again fully-dressed — with one notable exception, of course! — was looking a little more herself.
‘Who on earth is that?!’ I exclaimed as I suddenly espied a small figure studying the notice-board in the temporarily-deserted entrance-lobby. As Marietta and Kurt joined me at the door, the girl out there sneezed suddenly, and obviously supposing herself unobserved groped beneath her skirt for a handkerchief in that traditional “storage-place” favoured by schoolgirls the world over — the leg of her knickers….
Her KNICKERS!!!
The other two must have realised it at the same moment — the Major and myself undoubtedly concerned principally with the obvious circumstance that this could not conceivably be one of those four prefects we already knew about, or for that matter any of the girls we had so far encountered — but it was Marietta who tried to avert my Chief’s furious explosion as she explained urgently that the child must be a day-pupil belonging to the Lower-School, and whose parents were possibly unaware of the school’s occupation as an enemy HQ
‘So she wouldn’t know about your “no-knickers” ruling, sir,’ she concluded anxiously, ‘and cannot fairly be charged with disobedience.’
‘Hmm!’ — Klein murmured reflectively, ‘but on the other hand, if she were to refuse to take them off when so ordered, THAT would be disobedient, would it not? — and I should imagine, wouldn’t you, my dear Head Girl?, that without prior warning, and coming “out-of-the-blue”, so to speak, chances are, if she’s a properly-brought-up little girl, she WILL refuse, eh?!’
‘But sir! — that would be quite unfair… and besides as a Lower-School pupil she really IS, as you just said yourself, only a little girl — quite likely not even into her teens yet.’
‘Why yes… d-you know, you could be quite right, Head Girl Marietta,’ Kurt Klein assented cheerfully — far too cheerfully, to my way of thinking…. talk about “kinky”!… ‘Better fetch her in, Lieutenant… in any case, if she IS a day-girl she’s extremely late for school, huh?! Unpunctuality most certainly calls for a summary and exemplary punishment, would you not agree, Marietta?… and you, Freddy? I have to confess,’ he added with a sidewise glance at the corner where the cane now rested, ‘that the events of the last twenty minutes or so DO rather seem to have given me an appetite… one way or another…. — oh! not to worry, Head Girl, I AM bearing in mind her tender years, and you may rest assured my plans for her do NOT include a repetition of those rather more advanced… er… exercises which you and I subsequently embarked upon… no doubt one or other of your prefectorial pals might qualify in that direction, after I have caned them tomorrow morning, but in the meantime I am confident that Freddy here will be glad to oblige as a stand-in should I prove unduly enthusiastic, say — and following my suitable chastisement of that naughty little minx over there, appear to be considering something which might be deemed rather less suitable at her age — whereas quite clearly my esteemed Lieutenant is of an eminently-suitable age and development for either or both spheres of activity… eh, Frederika darling? — ALWAYS ready and willing to drop her knickers, I can assure you, Marietta — aren’t you, Lieutenant Frederika Meyer?!’
Oh! — a right proper bastard my Kurt can be, when he wants!
Posted by Fleas63 at 06:45