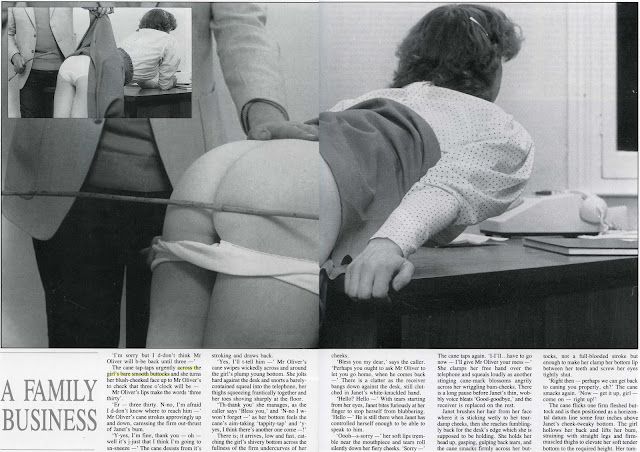 ‘I’m sorry but I d-don’t think Mr Oliver will b-be back until three —’
The cane tap-taps urgently across the girl’s bare smooth buttocks and she turns her blush-cheeked face up to Mr Oliver’s to check that three o’clock will be —
Mr Oliver’s lips make the words ‘three thirty’.
‘Er — three thirty. N-no, I’m afraid I d-don’t know where to reach him —’ Mr Oliver’s cane strokes approvingly up and down, caressing the firm out-thrust of Janet’s bum.
‘Y-yes, I’m fine, thank you — oh — well it’s j-just that I think I’m going to sn-sneeze —’ The cane desists from it’s stroking and draws back.
‘Yes, I’ll t-tell him —’ Mr Oliver’s cane swipes wickedly across and around the girl’s plump young bottom. She jolts hard against the desk and snorts a barely-contained squeal into the telephone, her thighs squeezing frantically together and her toes shoving sharply at the floor.
‘Th-thank you’ she manages, as the caller says ‘Bless you,’ and ‘N-no I w-won’t forget —’ as her bottom feels the cane’s aim-taking ‘tappity-tap’ and ‘y-yes, I think there’s another one come —!’
There is; it arrives, low and fast, cat­ching the girl’s shivery bottom across the fullness of the firm under curves of her cheeks.
‘Bless you my dear,’ says the caller. ‘Perhaps you ought to ask Mr Oliver to let you go home, when he comes back —’ There is a clatter as the receiver bangs down against the desk, still clut­ched in Janet’s white-knuckled hand.
‘Hello? Hello —’ With tears starting from her eyes, Janet bites furiously at her finger to stop herself from blubbering. ‘Hello —’ He is still there when Janet has controlled herself enough to be able to speak to him.
‘Oooh — s-sorry —’ her soft lips trem­ble near the mouthpiece and tears roll silently down her fiery cheeks. ‘Sorry —’ 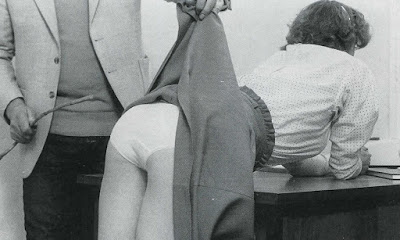 The cane taps again. ‘I-I’ll...have to go now — I’ll give Mr Oliver your mess —’ She clamps her free hand over the telephone and squeals loudly as another stinging cane-mark blossoms angrily across her wriggling bum-cheeks. There is a long pause before Janet’s thin, wob­bly voice bleats ‘Good-goodbye,’ and the receiver is replaced on the rest.
Janet brushes her hair from her face where it is sticking wetly to her tear-damp cheeks, then she reaches fumblingly back for the desk’s edge which she is supposed to be holding. She holds her head up, gasping, gulping back tears, and the cane smacks firmly across her buttocks, not a full-blooded stroke but enough to make her clamp her bottom lip between her teeth and screw her eyes tightly shut.
‘Right then — perhaps we can get back to caning you properly, eh?’ The cane smacks again. ‘Now — get it up, girl — come on — right up!’
The cane flicks one firm-fleshed but­tock and is then positioned as a horizon­tal datum line some four inches above Janet’s cheek-tweaky bottom. The girl hollows her back and lifts her bum, straining with straight legs and firm-muscled thighs to elevate her soft tender bottom to the required height. Her tummy leaves the desk-top as she struggles to achieve the fleeting rendezvous bet­ween hot, well-caned bottom-cheeks and the cane’s cool and slender length. With a muted gasp she just manages to nudge one cheek, then the burning crown of the other, then, as is expected of her, the crimsoned summits of both bum-cheeks at once, up against the cane. She grips the desk and sobs breathlessly and the cane is raised and brought down once more, squarely across her pert, up-raised bum. 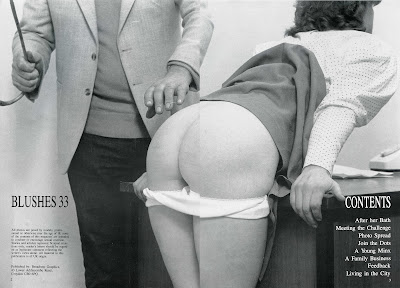 When the telephone rings again it is three thirty-two. Janet, who meanwhile has been left for a time bottom-up across the desk ‘to think about it’, is in a con­siderably more dishevelled state than she was when last the telephone demanded her attention. Her skirt, which had been lying in rough pleats in the small of her back, is now thrust up to shoulder height, the waistband has come undone, and her blouse, at first crisp and neat has been shoved up her back along with the skirt. Her bra-strap is tight across her shoulder blades and her round handful-sized breasts, only partly cupped by a pale pink brassiere, are pressed softly against cool wood. Her knickers have descended to below knee level and are presently in­hibiting the rather frantic kicking motions she is making, Mr Oliver having return­ed and dealt her plump tender-looking bottom a crisp stroke with his cane.
Tears which had ceased to flow are prompted almost instantly into full flood again, and Janet’s hands are flailing desperately behind her in an attempt to ward off any further applications of the cane to her squirmy, tweaking-together bum-cheeks.
‘Answer the ‘phone, Janet’ comes Mr Oliver’s teasing, almost mocking voice.
‘Ooo-ohhh —’ Janet gropes for the instrument, knocking it to the desk before she manages to grasp it.
‘Hello — feeling better now, my dear?’ Janet gulps snottily and stumbles out an apologetic negative. She listens momentarily then holds the ‘phone up and back for Mr Oliver to take. She lies face down and hides her face in her hands, weeping plaintively, not listening to Mr Oliver’s conversation. Then the cane tap-taps her flinching bottom again. 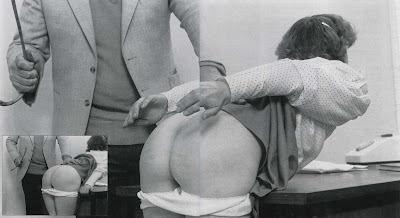 ‘Up, please, Janet’. Gasping, sobbing, she reaches back for the desk’s edge and hollows her back once more, lifting her hips, elevating two hot and trembly buttocks to the cane’s dread touch. She doesn’t notice that the telephone has not been replaced on its cradle, but lies beside it, not far from her pretty, flushing face. Mr Oliver’s cane sweeps down again, and Janet’s bleating squeal of pro­test is carried down the ‘phone line to the caller’s ear.
That gentleman listens with rapt atten­tion for the next several minutes while Janet is given the balance of her punish­ment, then, when there is nothing more to be heard from the other end of the line, the ‘phone is replaced and an intercom buzzer is pressed.
‘Miss Dawes — make a note please. Mr Oliver’s new assistant, Miss Lloyd, is to be reassigned to Accounts next week. If she’s to learn anything at all of how we work she’ll have to gain ex­perience in as many departments as possible.’
No good having young blood in the family business if the new people didn’t learn the way it all worked, from the bot­tom up. He smiles at his joke. Miss Dawes comes back to life on the intercom.
‘Will that be all, Mr Lloyd?’
‘Yes, thank you, Miss Dawes.’ 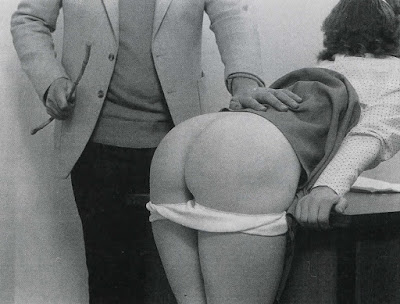